Abele cuts sheriff's budget and blasts him as rascist; Clarke and Weishan beat up on Abele. 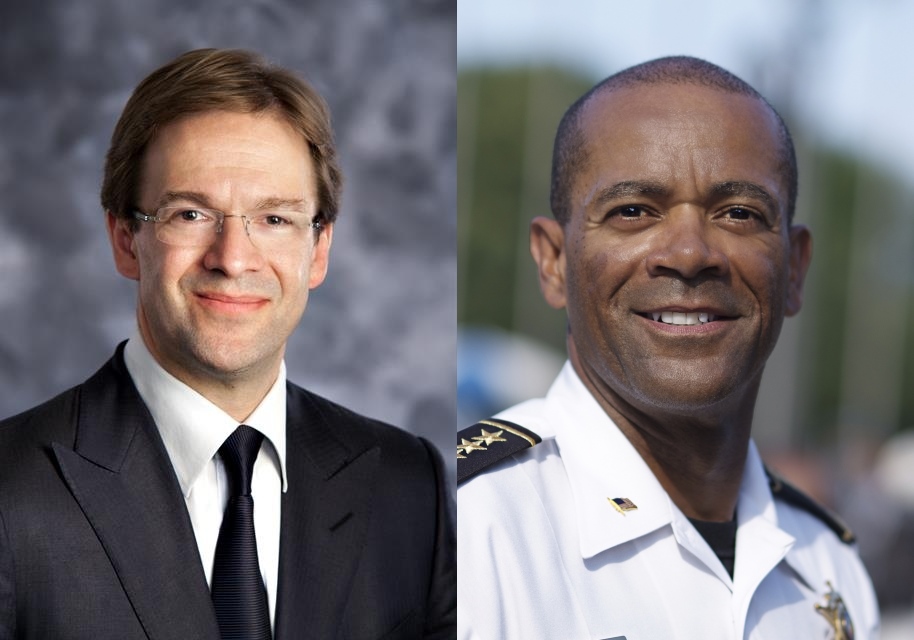 Milwaukee County is once again embroiled in a battle over the sheriff’s budget, but this time the debate has added a new element, bickering over racially charged statements by Sheriff David Clarke. Clarke and County Executive Chis Abele have been verbal antagonists for years.

Abele attempts to trim the sheriff’s budget every year. As he recently explained in an op-ed, the Sheriff’s Office already spends one-quarter of the county’s tax levy, even though “Milwaukee County is one of only a few fully incorporated counties in the United States, meaning every inch of the county also is covered by its own municipal police department.” As Urban Milwaukee has previously reported, the county sheriff’s entire department handles little crime, far less than one percent of all crimes in the county.

Abele’s budget would have left the Sheriff’s Department with a $9.8 million hole in its budget. County supervisors, in their budget, added $4 million back. So Abele vetoed that amendment, one of just two vetoes out of 66 amendments to the budget proposed by the county board.

In a statement released Tuesday, Abele contended there was not sufficient accountability tied to the $4 million increase in funds. The statement called for “transparency” and “evidence-based practices” as requirements for the money in the county board’s amendment. “With no discussion about how these resources are to be spent, the sheriff will continue to spend tax dollars with no accountability to the public,” Abele has contended.

But Abele also sought to tie his veto to Clarke’s comments about the Black Lives Matter movement. Clarke has issued statements on social media and television referring to Black Lives Matter members as “sub-human creeps”, and has also said, “Before long, Black Lies Matter will join forces with ISIS to being down our legal constituted republic. You heard it first here,” on twitter.

That set the stage for this comment in a press release by Abele: “I am vetoing this amendment because I will not raise property taxes by 1.4% to validate the Sheriff for his repeated incendiary comments and his out of touch view on criminal justice in our society.” He added that Clarke’s remarks are contrary to ensuring “a fair and effective justice system.” Abele said additional resources should only be given to the Sheriff’s department as a part of a reform of Milwaukee’s criminal justice system that finds ways to reduce what he called the racially disparate outcomes and effects of the system.

To which Clarke responded via the Milwaukee County Sheriff Office’s official Facebook page, charging that Abele is trying to “control the sheriff’s speech” with budgetary policy. The post also says that the vetoes do nothing to “hurt” the sheriff, and that the loss of funding, “Will endanger the safety of everyone living in Milwaukee county.”

Clarke also charged that Abele’s real concern is congresswoman Gwen Moore’s decision to back Abele’s opponent, state Sen. Chris Larson. “He knows that will make it difficult for him to attract black voters in Milwaukee,” the post says.

County Supervisor John Weishan, Jr. eagerly jumped into the fray, announcing his support for an override of Abele’s veto on Tuesday. He described the veto as a personal vendetta against Clarke, adding that there are ”Legitimate funding issues that the County Executive is ignoring… The department needs more deputies, that’s just a fact.”

Currently, the department is staffed mostly by senior deputies, Weishan says. These are individuals who are maxed out on the pay scale. The department is facing 12 to 18 “potential retirements” this year and is requiring its deputies to work forced over-time, which is a costly expense when it is senior deputies working the extra hours, he says. The sheriff needs to hire new deputies to run a cost-effective department, and also ensure the safety of Milwaukee citizens, he contends.

As for Clarke’s inflammatory remarks, that is no reason to cut funding for the department, Weishan says. He also notes the county board  didn’t cut funding to the county executive’s office after Abele made what some board members felt were disparaging statements about the African-American community in Milwaukee. Abele’s statement came in response to a question from Supervisor Khalif Rainey about what he had done for African-Americans in Milwaukee. Abele’s answer was that he increased funding for programming at corrections facilities, child support enforcement and mental health services. “Is that what he thinks of the African American community? That they need more social services and better accommodations at the House of Correction?” Rainey said in a press release blasting Abele.

Weishan wants to see an end to the “war of words” going on between Abele and Clarke, and says a budget cut for the sheriff won’t change Clarke’s behavior. “There’s no way to make David Clarke talk nicer to people,” Weishan says, adding, “I could care less what he says on T.V.”

In an interview with Mitch Teich on WUWM-FM, county board chair Theo Lipscomb, Sr. called Abele’s proposed cut in Clarke’s budget “not realistic,” given increases in costs the department has dealt with in recent years.

The only other amendment Abele vetoed would add $750,000 for a fish passage on the Estabrook Dam, a provision that Lipscomb, in whose district the money would be spent, has supported. Abele called on county supervisors to authorize “the demolition of the dam itself, as you have agreed in the past.”

2 thoughts on “Abele vs. Clarke, Once Again”