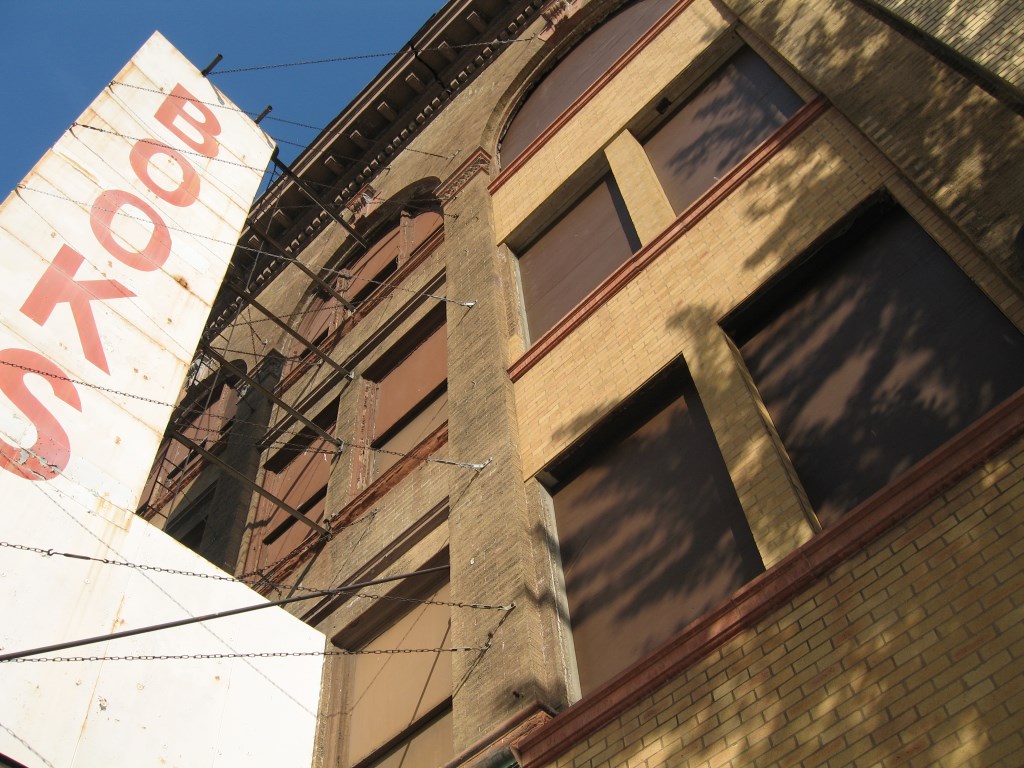 In the wake of the news that an old, vacant building at 100 E. Seboth Street has been condemned by the City of Milwaukee and ordered to be razed comes news that another 19th century structure in Downtown is threatened with a similar fate.

On October 19th, 2015, the City of Milwaukee Department of Neighborhood Services issued a Service Request to inspect a vacant building at 834 N. Plankinton Ave. as a candidate for condemnation actions.

For nearly 40 years, until it was shuttered by the city, the building was the home to Renaissance Bookshop, a classic used-book store that had drawn a loyal clientele to the four-story riverfront structure.

By issuing the order, the city has determined that the “structure or part thereof is extremely unsafe and in danger of structural failure or collapse,” or “the property is unsafe to the public or users of the property.” The next stop could be the wrecking ball.

The city complaint against Robert John, the building owner and former House Confidential Honoree, cites unabated building violations encountered in over 100 separate inspections from 2005 to date. [Emphasis mine.] They range from broken windows along the riverwalk to missing bricks, “cracks and structural deficiencies in load-bearing walls,” “excessive dead load that exceeds the structural capacity of the building,” and an “unstable east building facade.” In 2011 the building was condemned and found unfit for any human habitation, occupancy or use.

In 2012, the city ordered John to obtain a permit to complete the load-bearing wall and facade reinforcement orders previously issued. “The violations continue to exist,” Assistant City Attorney Kail J. Decker noted in his summons and complaint asking the court to call the building a “public nuisance,” and fining John $10,000 in addition to finding him liable for costs of remediation.

At this point the most economical remediation would be demolition.

The building, although boarded up on the first floor, is apparently still loaded to the rafters with books and other items. The building’s structural problems far antedate its occupancy by John and Renaissance Book Store.

The building at what is now 834 N. Plankinton Ave. replaced two shed-like structures in 1895 along the Milwaukee River’s western shore at what was then 260-262 W. Water St. Owner Charles Lange paid $8,500 to construct what was then a three story “store” across from the Salvation Army headquarters downtown. Charles F. Ringer was the architect and G. Gruendler was the builder. This was a great area for stores, since the goods came in via the back door on the river and left via the front door on the street. The neighborhood was teeming with furniture manufacturers and retail establishments. There were saloons nearby, and across the river were the fleshpots of River Street, the city’s Red Light district.

On February 19th, 1902, seven years after it was built, Lange took out an application to make renovations to the structure. The permit called to “build add’l story average height 10 ft. on present bldg.” The walls were “solid brick 12″ thick,” to be “strengthened with brick pilasters.” This may have been the beginning of the building’s undoing.

The reinforced brick pilasters were not enough to save this structure. By 1926 the building was the site of the Home Furniture Co. at a time when this portion of downtown was the furniture district, as it remained for decades.

In February 1932 the building inspector came by and sent a letter to the property owner. “You are hereby advised that a settlement has taken place at the South West corner of the above mentioned building, causing the columns located on the first floor and supporting the front of the building to become out of plumb.

“Also, the brickwork at the aforementioned corner has become cracked and is in a dangerous condition. This is especially true at the fourth floor line. It appears that the building because of this settlement has racked to the north at the second floor line.”

In July the owners received approval to insert steel rods on the third and fourth floors “so as to strengthen and stabilize the southwest corner of the aforementioned building.”

If that were not to work, “the entire corner will be removed to the first floor line and rebuilt.”

By 1939 foundation problems still bedeviled the structure that was located at the water’s edge, where wooden pilings were expected to remain submerged in water, and free from rot. Instead, the top three feet of the pilings were cut off and replaced with concrete, and the foundation walls were repaired. At that time the current 14 foot by 10 foot canopy was erected over the building’s entrance.

In 1957 Home Furniture, by then in the building for 31 years, put on a new storefront. The north portion of the west facade, with its stone veneer, dates to that time, as do the windows, and now boarded-up front door.

“I am the owner of the building at 834 N. Plankinton Ave. Milwaukee, Wisconsin — the old Home Furniture Building. This company went broke several years ago and we have not been able to rent or sell this building.

“With taxes and cost of heat it is becoming almost too much to handle.”

Later that year, Insurance Liquidators took out a permit, later cancelled, for “retail sales of shoes, socks and wigs” at the premises. Then, in 1975 there were plans, also aborted, to run an “art gallery and exhibition area and photography shop,” as the “Open Studio & Gallery,” to be run by Ken R. Wolf.

Finally, on February 24th, 1976, Robert John, prospective buyer, took out an application for an occupancy certificate for the entire premises to run his book shop in the vacant building.

In 1979, the city issued a violation to John: “you are hereby ordered to tuck-point and make structurally sound the west elevation southwest corner of building” — the site that had been giving the building problems for nearly a half century. In 1989 John also did more tuckpointing, and even more as the years rolled on.

Still, the building and its problems kept getting ahead of John, while the building inspector was never far behind, slapping John with 100 or more violations. Today, the fate of the building remains uncertain, but less than rosy.

The city, if it is successful in its motions, would attempt to salvage materials from the building, I am told. These would include the tin ceilings and perhaps other fixtures. The contents, including the books and considerable artwork inside would go to a non-profit.

The next hearings in the court case will be held in 2016, although it is not certain if the structure will still be standing at that time.

As the city noted in its violation report to John: “If the City corrects the nuisance on your behalf, you may still be prosecuted in court and subject to a forfeiture ranging from $150 to $5,000 in the manner provided in Section 200-19 of the Milwaukee Code of Ordinances.” John has until November 18th to provide “safeguards to protect pedestrian traffic in front of and around building. Provide scaffolding for safe passage and safeguards to extend past edge of west facade on all sides.”

Can this building be saved? If so, it appears it won’t be Mr. John doing it. 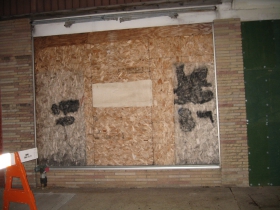 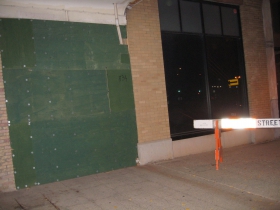 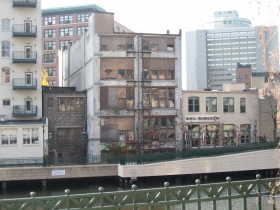 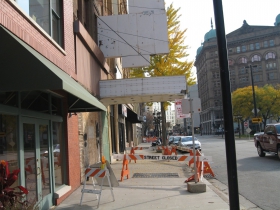 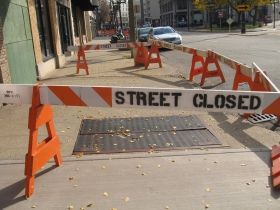 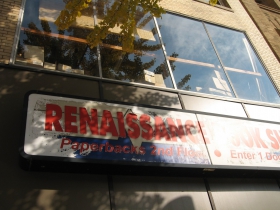 One thought on “Plenty of Horne: City Goes Medieval on Renaissance”