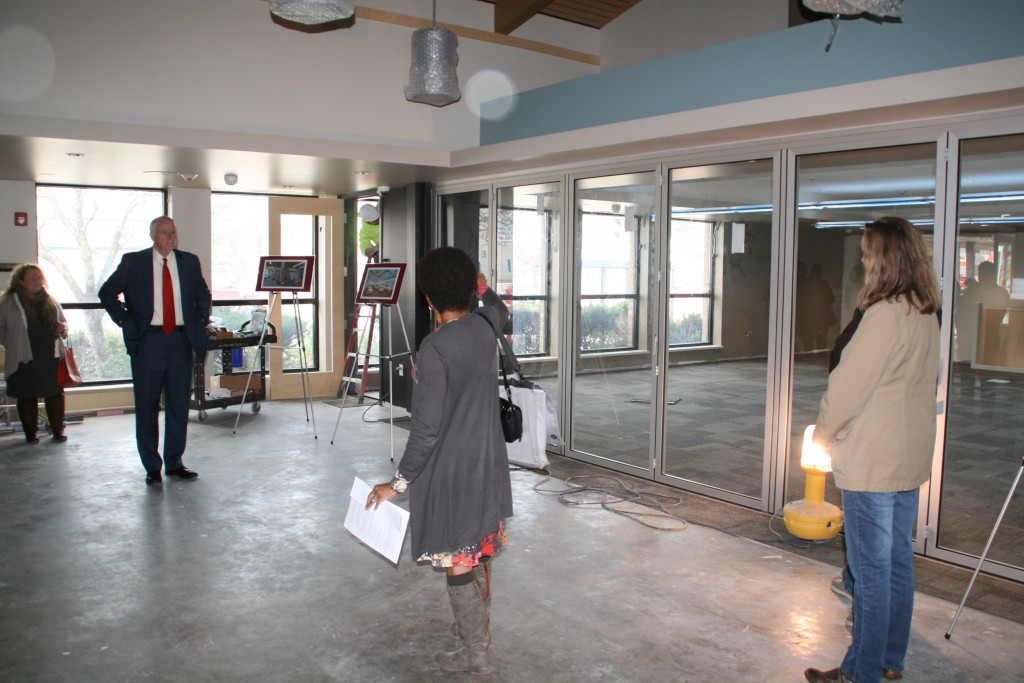 Come December 12th, Milwaukee’s South Side will have a new library. The Tippecanoe Library branch of the Milwaukee Public Library, located at 3912 S. Howell Ave. will reopen following an extensive renovation. Visitors will find the library housed in the same physical structure as it was previously, but with nearly everything on the inside (and outside) vastly improved.

Gone will be the drab 1960’s feel, replaced with a new layout that emphasizes natural light and features specialized, but multi-purpose spaces over single-use facilities like the former meeting room. Milwaukee Public Library Deputy Director Joan Johnson noted that the changes will not only allow the library to provide services more efficiently, but will help the library be seen as a “third place” for the community to gather.

Earlier this week, Johnson led a tour of the facility, along with Mayor Tom Barrett and local alderman Terry Witkowski. While workers scrambled to complete electrical work all around the tour group, Johnson highlighted a number of the new features coming to the renovated facility including 24/7 book return, meeting space that transitions seamlessly to public space, greatly expanded window bays, dedicated spaces for teens and children and a litany of technological improvements that will allow patrons with and without computers to easily access the internet and library resources.

Outside the library, a number of new amenities and enhancements are taking place including the addition of bioswales and permeable pavement, as well the creation of a rain garden, community garden and secret reading garden. The reading garden is named after Frances Hodgson Burnett‘s 1911 novel “The Secret Garden,” and will be located on the eastern wall of the building. The revamped facility will also feature a single entry at the southwest corner of the building with a more welcoming vestibule.

The revamped facility is being designed by Jeff Hanewall and Alex Ramsey of Engberg Anderson, with Creative Constructors serving as the lead general contractor. The renovation has an estimated cost of $4.525 million, in line with the other library projects.

The Milwaukee Public Library Foundation, led by Ryan Daniels, is still in the process of raising funds to pay for “extras” including improving the gardens and adding amenities to the community room. Contributions of $100 and above will receive recognition on the library’s donor wall. Previous foundation fundraising supported the installation of the fireplace, public art and other program support at the recently opened East Library.

The library building, which originally opened in 1969, will still include the Guido Brink sculpture when it reopens. The three-color sculpture was inspired by the library’s Native American name, Native American mythology and the spirit of the Mantiou.

The Tippecanoe branch isn’t the first library the city has rebuilt. Since Barrett came in to his office, his administration has led the construction of two new libraries, East Library and Villard Square Library. Both of those libraries are in mixed-use facilities that generate substantial property tax revenue. The city is also rebuilding two other libraries in similar fashion, the Mill Road Library and Forest Home Library. The goal is to have all of the branch libraries in modern facilities by 2020, which the city is well on track to deliver. 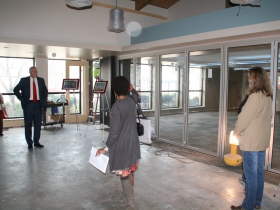 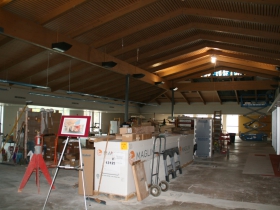 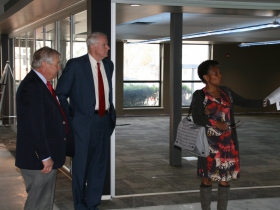 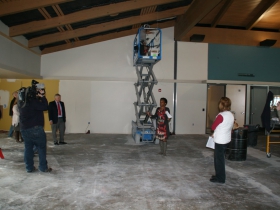 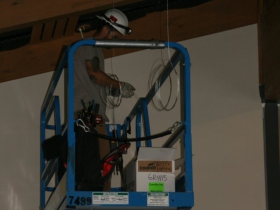 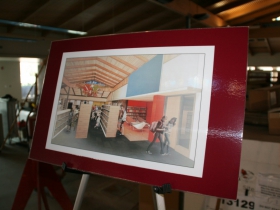 One thought on “Hard Hat Tour: Inside Tippecanoe Library”