Pay The Devil is Not a Metal Band

Says the band. In fact they are a local band that delivers their own take on traditional old time music. 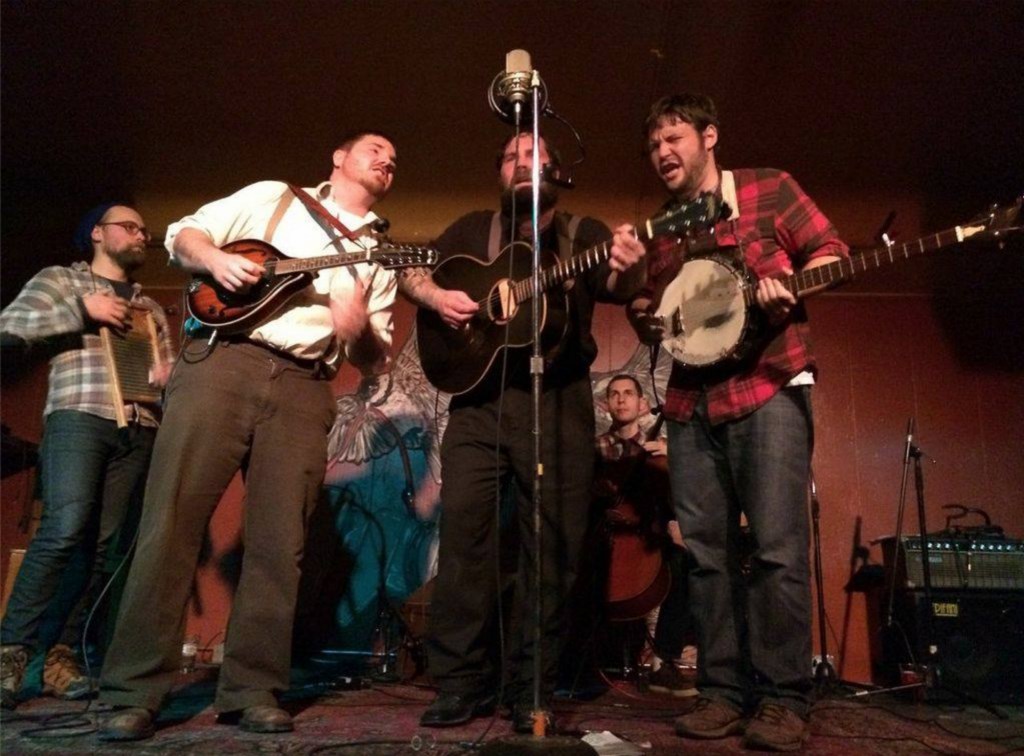 At the folksy crossroads of bluegrass and drowning sailors one can find Pay The Devil, a local band that specializes in delivering their home-brew style of traditional old time music. The band plays to their roots, with songs in their line-up that have been passed down through generations of family to them. Pay the Devil features Ivan Baker on the guitar, Ivan Eisenberg on the banjo, Matt Gibbons on the mandolin and Jeremy Ault on the spoons and washboard.

Urban Milwaukee sat down with Baker, Eisenberg and Gibbons learn a little bit about the band, and possibly what to do with a drunken sailor.

How did Pay The Devil get started?

Eisenberg: I moved to Milwaukee and started playing in the Milwaukee hurling club, and the other Ivan played in the hurling club. Everyone was like ‘oh do you know the other Ivan’. I grew up sailing and he sails out of south shore yacht club and races boats, so we started racing sailboats together. Around that time we started to play music together. After about a year of that we called Matt. Jeremy knew my parents back home, and he just came one day to play with us. He plays the spoons because there were just spoons there to play, so he played them and the washboard, and still does to this day.

What are some of your influences?

Gibbons: Jerry Garcia, particularly Old & In The Way, which was his blue grass band in the late 70s.

Eisenberg: I like the Woody Guthrie stuff. I always liked how it’s community music. I played music with some people the other day and every thing was like A flat, and it takes like 20 min just to figure out the structure of the song your going to play. But, with any Woody Guthrie song, you can just start playing it and every one can see exactly what’s going on and just start playing with you. It’s really inclusive music.

Baker: It’s following this long traditional old time vain, and that’s where Woody Guthrie was like the Bridge from the past to Bob Dylan and Old Crow Medicine show. Keeping alive something that was alive 100 years ago, I think is an awesome thing.

Where does the name come from?

Eisenberg: It’s a sailing term. Old wooden ships leaked, so to keep two wooden planks from leaking you had to pound cotton and tar and pitch in between it. And then the wood swells and it seals up, but then that gets old. So at one point someone has to go down and fix it. So that’s called paying a seam. So in shipbuilding you pay a seam, and then the devils are the longest seams on the boat and they’re the hardest to fix. So, it was like a threat. Today when you hear people say, “There’ll be hell to pay,” that’s like a modern incarnation of like, “There’ll be the devil to pay.” It’s a horrible job, and no one wants to do it, but it has to be done.

Baker: That’s where all the bilge water was, so its like p*** and sh** and sweat.

Eisenberg: The Devil’s the very bottom; it’s like right on the keel.

Gibbons: We were just tossing around a lot of bad names, and that one wasn’t bad.

Eisenberg: The downside is sometimes you get people who think were going to be a metal band.

How long have you been playing?

Gibbons: We’re about to start our 4th year.

Eisenberg: My dad’s a mandolin player and a harmonica player, so I grew up with the music. So I‘ve been playing music a long time. I did the saxophone in the middle school band, started playing the guitar in high school and then I started playing the banjo in college.

Baker: I started when I was 12, and my dad taught me. So that’s kind of the influence of my bluegrass music. I never really listened to it as a kid except for my dad playing it. That was the inspiration for later in life playing that kind of music. I played in several bands, electrified bands. This kind of fell together, and we started having so much fun that we wanted to bring it to other people.

Gibbons: It’s very much like a family band kind of project. Several of the songs that we play are songs that both of the Ivan’s dads taught them. All the music we play, is kind of akin to music before the popular music revolution of the 50s and 60s.

How would you describe your band?

Eisenberg: My favorite is Shanty Grass. We play with Johanna Rose – frontwoman of the New Boyz Club – from time to time and she came up with that term. On our first album we have one pure A capella sea shanty song. It’s sort of the bluegrass version of sea shanty music.

Gibbons: It’s old time campfire music, is what it is. Our band is really at its best at 1;30 in the morning around a campfire. Just three weeks ago we were booked to play at midnight and then we were playing again at 3:30, and that’s where were at our best.

Eisenberg: Well? The 3:30 one not so much. There’s something about all you can drink parties that make your 3:30 set sloppier than your midnight set.

Gibbons: Outside of blue grass and drinking music, our other genre is just like old time work songs. They’re songs about mining or dying at sea.

Baker: Old time music was a hub of all the different cultural styles of music. So in the Appalachian Mountains there was a big influence from the waves of Irish immigrants, and then there were all the African American influence, and the blues being born at this time. It’s folk music, so it’s not refined in that symphonic sense. I think it’s in all of us.

Gibbons: None of our music is about materialism or how cool we are, or anything like that.

Do you have any Local Influences?

Eisenberg: We’ve played a bunch of shows with Grasping at the Straws, the Calamity Janes and Dead Horses.

Gibbons: I’d say pushed by, rather than influenced by. Chicken Wire Empire and Dead Horses play similar music. I’d say pushed to get better by, because there is just a lot of really good musical choices out there.

What is your favorite place to play?

Eisenberg: We’re quite fond of outdoor shows. We’ve played a bunch of awesome events like barn raisings, bon-fires, and places like that. That is how we practice, totally unamplified, so it is our favorite way to play. As far as venues we’ve always had a ton of fun at Linneman’s in Riverwest. It has a great sound and great atmosphere. We’ve played a lot of shows at Bremen Cafe, and a few of those drew pretty amazing crowds. We played Chill on Hill once, which was really cool too.

Do you have any albums coming out soon?

Eisenberg: Nothing set in stone, but we have about 10 new songs that we have been writing and polishing since we put out Wrong Side the of the River and I think internally we are hoping to get something new out by next spring. We have a few shows coming up and we’re working on getting a handful of new stuff ready to try out.

What are the bands plans for the future?

Eisenberg: Hmmm, good question. We have a few shows booked for this Fall, so we plan to play those. The album would be next. We’ve never really been super big on planning. I guess to plan you kind of need to know what you want, and I think collectively we don’t want to think that hard. Would be nice to play a few more summer festivals next year. You know, play a show and then sleep in a tent. So let’s say our plans for the future are to play a camping festival and record another album.