Rock Out for Halloween

Great concerts -- and one book reading -- happening this Saturday. 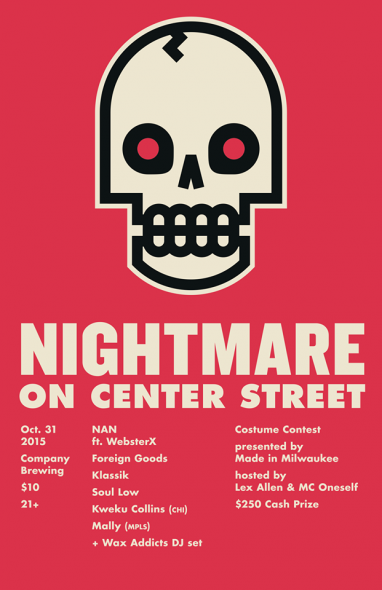 A Nightmare on Center Street

Last Halloween my friends and I went to the Bucks Home Opener and happened to sit in front of Jabari Parker’s entire extended family. Every time he touched the ball his younger cousins behind me screamed like they were at a haunted house. Luckily the burglar mask I was wearing, part of my Fantastic Mr. Fox costume, managed to muffle the sound by a couple decibels. After the game I stopped by at the Yield Bar.

That night I discovered local dream pop darlings GGOOLLDD. A few songs in, GGOOLLDD’s silver wig-wearing frontwoman Margaret Butler belted out “All we need is two heartbeats and a stereo,” during their latest single “Boyz.” At that moment my heart felt a pull to go meet a girl at The Hotel Foster where we connected and danced the night away.

GGOOLLDD will be playing the 10th Annual Freakfest in Madison this Halloween, but there’s no shortage of great gigs in Milwaukee this Saturday. Here’s a few of my favorites.

There have been some especially stacked bills over the last year, but this one takes the cake. While this Saturday show is officially the Milwaukee (and final) stop on WebsterX’s three-act, three-city ‘Midwest Orbit Series’ tour with Chicago kinfolk Kweku Collins and Minneapolis comrade MaLLy, it has a slew of local talent attached. Wax Addicts will be spinning all night, the out-of-towners will open, then heavy pop rockers Soul Low, who may play some of the new songs they recorded this weekend for their upcoming album. They’ll be followed by award-winning, soul-singing, smooth-rapping, multi-instrumentalist Klassik.

Live music will take an intermission at that point for the $250 cash prize costume contest hosted by Lex Allen (of New Age Narcissism) and MC Oneself. Klassik and Soul Low bassist Sam Gerhke will return with Jay Anderson on sax, Tim Russell on drums, Quinten Farr on keys, Randy Komberec on guitar, and Abby Jeanne Rebel Love on vocals for the latest interstellar alignment of Foreign Goods. Closing out the night will be WebsterX and his collective New Age Narcissism, playing their second show together since taking Summer Solstice by storm.

Here’s a sample of what WebsterX brings to the stage:

It was recently announced that Bon Iver frontman Justin Vernon’s Eaux Claires music festival will return next summer after a triumphant inaugural outing this July. Two of the stand-out acts were Minnesota rap collective Doomtree and fellow Twin Cities rising rap star Lizzo, who is among five emerging artists that Prince recommends. Seeing Doomtree on the heels of their new album All Hands at Eaux Claires was an exhilarating experience. Lizzo turned in one of the shortest yet most memorable sets at Eaux Claires, building on the rave reviews from her opening spot for Sleater-Kinney at the Riverside Theater back in February. Local rap pioneers the Rusty P’s, performing with recent collaborator The LMNTlyst, round out this hard-hitting Midwest rap show at Turner Hall.

A choice sample of Doomtree:

There are a number of rock n’ roll shows in town this Halloween weekend, but only one of them has an all-female Ramones cover band. Sheena & The Headbangers are made up of Amelinda Burich (Group of the Altos, Winter Bear) on guitar, Wendy Norton (Ramma Lamma) on drums, Melanie Roe (The Grovelers) on bass, and Green Bay’s Holly Trastie (Holly & the Nice Lions) on vocals. Wendy will be doing double duty when sleaze punk favorites Ramma Lamma take the stage. They’ll be joined by local garage surf punks The Pukes and Brooklyn-based The Nuclears. This affair at Quarters Rock n’ Roll Palace wouldn’t be complete without its “sluttiest costume” contest. 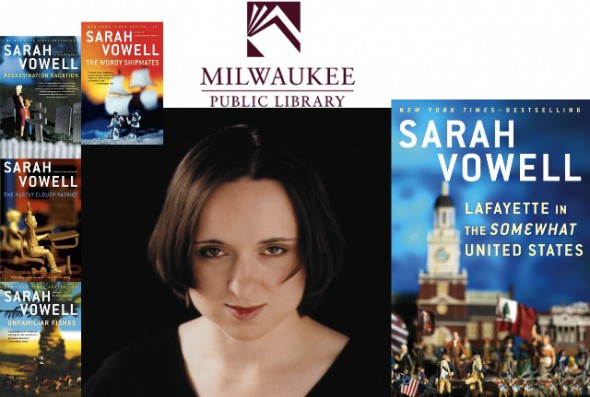 Back in high school my African-American Literature class took a field trip to see Common perform at the downtown public library. It was wild seeing the Grammy and Oscar-winning Chicago rapper in the auditorium of one of my favorite Milwaukee buildings. This Saturday’s appearance by Sarah Vowell won’t be that kind of show. Vowell is not a musician, but she is a rockstar in the literary world. A favorite of The Daily Show with Jon Stewart and Late Night with Conan O’Brien, Vowell was also a contributing editor for This American Life. The author will discuss and sign copies of her New York Times bestseller, Lafayette in the Somewhat United States, starting at 7 p.m. This Boswell Book Company event is free and open to the public, and will end in plenty of time to make it out to one of the aforementioned concerts.