By Jon Peacock, Wisconsin Budget Project - Oct 21st, 2015 03:17 pm
Get a daily rundown of the top stories on Urban Milwaukee

State policy choices contribute to the growing divide in income and wealth between the richest and poorest Wisconsinites.  Although most parts of the state and federal tax codes and federal entitlement programs are adjusted (“indexed”) each year for inflation each year, Wisconsin programs that assist low-income households are less likely to be adjusted for inflation. The decision to freeze those forms of assistance means they are steadily eroded over time – to the detriment of struggling low-income workers and their communities.

A recent article by Chris Rickert in the Wisconsin State Journal contrasted the erosion of several forms of public assistance – including Wisconsin Works benefits, the Homestead Tax Credit, and the state minimum wage – with a proposal by some GOP members of the state legislature to periodically adjust campaign contribution limits for inflation. I was reminded of that article by two new reports issued late last week that shed more light on the effects of not adjusting the Homestead Tax Credit and Wisconsin Works:

1) The declining Homestead Tax Credit – This tax credit provides well targeted property tax relief for low-income homeowners and renters. The annual DOA budget report, which was released last Thursday, shows that spending for the credit dropped again in the 2014-15 fiscal year and was 9% below the anticipated amount. A major reason for the decline is that the formula for determining eligibility and the size of the credits is not adjusted annually for inflation. The practice of indexing the Homestead formula was ended in 2011, even though almost all the other significant elements of the state tax code are annually adjusted for inflation. 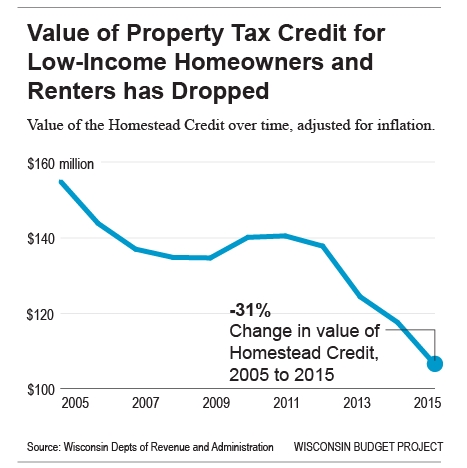 2) The erosion of Wisconsin Works (W-2) benefits – When Wisconsin initiated its welfare reform program, W-2, in the mid-1990s, the cash benefit level for Community Service Jobs (CSJ) was set to be about the same as the former welfare benefits that the new welfare-to-work program was replacing. In the early years Wisconsin increased the benefit level after wages increased, and the monthly CSJ payment reached $673 in 2000. However, it hasn’t been increased since then; in fact, it was reduced a few years ago to $653 per month. In inflation adjusted terms, the monthly payments for CSJ placements is now worth about 28% less than in 2000.

Wisconsin isn’t the only state that has allowed the steady erosion of benefits for its welfare reform program. An October 15 paper by the Center on Budget and Policy Priorities shows that the value of welfare reform benefits dropped by 25% or more between 1996 and 2015 in 30 states.

These are just two examples of policy choices that are holding back parents with low-wage jobs who are trying to climb the economic ladder. Yet Wisconsin continues to annually adjust tax brackets for inflation, which helps high income taxpayers, and state lawmakers have also made a number of tax cuts that disproportionately benefit upper income Wisconsinites.

The two reports issued late last week provide further evidence that our state needs to reverse the policy choices that are increasing the economic divide between the rich and the poor. Only by enabling all Wisconsinites to succeed economically can our state prosper.

2 thoughts on “Benefits for Working Poor Decline in Value”