Improvements to Near North Side Housing Made

By Karen Slattery, Milwaukee Neighborhood News Service - Oct 14th, 2015 11:01 am
Get a daily rundown of the top stories on Urban Milwaukee 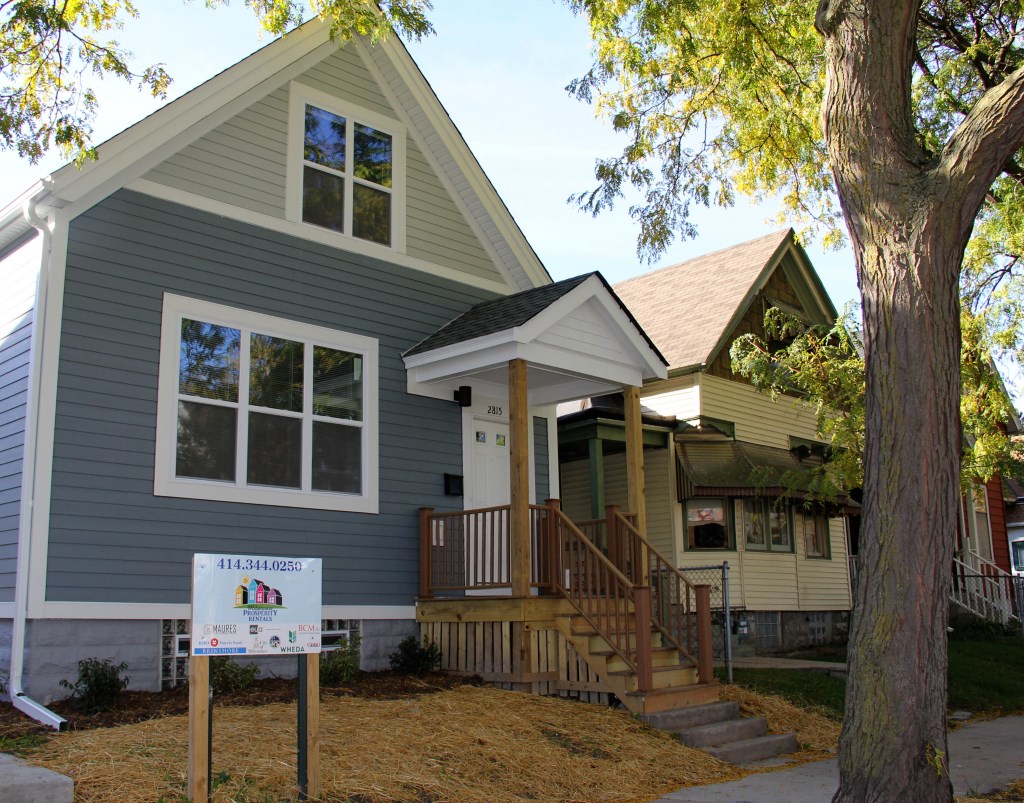 This old home’s new look is giving hope to neighbors in the Harambee neighborhood, an area hit hard by the tax-foreclosure crisis. Photo by Karen Slattery.

Brenda Knox keeps her living room curtains closed, even on the sunniest days. She’s lived in the same house on North Sixth Street in the Harambee neighborhood for more than two decades and says she’s never felt really safe. She doesn’t want trouble looking in through her windows.

But, one of these days, she may feel comfortable enough to open the drapes. The City of Milwaukee and its partners are renovating three foreclosed homes in her neighborhood, the one next door and two across the street. Another house at the other end of the block has already received a facelift.

The progress Knox sees on her street is the result of one of the city’s “scattered sites” projects, which involves simultaneously rehabbing tax-foreclosed houses in four-to-five block clusters in the city.

But the city cannot do the projects alone, according to Mario Higgins, housing policy director for the City of Milwaukee. So the city has partnered with Maures Development Group, Brinshore Development, BMO Harris Bank and others to refurbish 35 city-owned housing units in the Harambee and Lindsay Heights neighborhoods and get them back on the tax rolls. The Wisconsin Housing and Economic Development Authority (WHEDA) provided the low-income housing tax credits for the project.

“It is a powerful strategy for improving neighborhoods,” said Higgins.

The city’s effort to refurbish several houses in the same area at the same time quickly leads to visible changes to the neighborhood. Developers are asked to consider the architecture in the surrounding area so that renovations fit visually into the neighborhood, according Maria Prioletta, redevelopment and special projects manager with Milwaukee’s Department of City Development. “We even had a discussion with a developer about porches, about how porches should look,” she said.

The project grew out of Mayor Tom Barrett’s Strong Neighborhoods Plan The mayor said the city is a “quadruple loser” when homes are empty. The houses go to waste, fail to generate tax revenue, drive down nearby property values and place additional burdens on city resources such as police and fire services.

The mayor said he hopes this redevelopment project will have a positive impact on the people in the neighborhood. “This is what we’re trying to do, improve the quality of life,” said Barrett.

According to Prioletta, Knox can expect to see the housing renovations in her neighborhood completed before the end of the year. Knox said she hopes she gets good neighbors. She said that she thinks the neighborhood will “be safer and it’ll be nicer.”

Higgins and Prioletta agree that Milwaukee may have reached the high water mark on tax foreclosures, but “the city will be living with the impact for a while,” according to Higgins.

Early next year, the city will begin renovating tax-foreclosed properties in the Century City neighborhood, according to Prioletta. She said more than 30 homes will be refurbished as part of the Century City Housing Initiative.

In addition to cleaning up the mess caused by the foreclosure crisis, the city is trying to avoid additional foreclosures. According to Higgins, people having trouble paying taxes or mortgages should contact Take Root Milwaukee, a hotline program that involves banks, realtors, the city and others, and is aimed at helping people work through the problem.