By Jon Peacock, Wisconsin Budget Project - Sep 30th, 2015 11:48 am
Get a daily rundown of the top stories on Urban Milwaukee 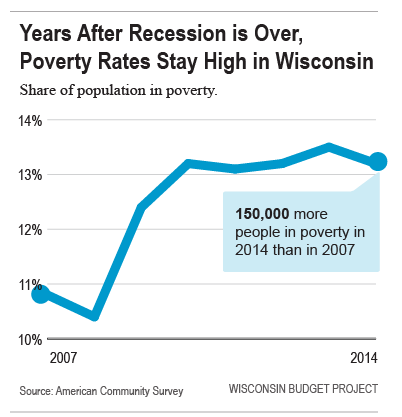 Years After Recession is Over, Pverty Rates Stay High in Wisconsin

Many Wisconsin families continue to struggle to make ends meet, according to new figures released recently. We have our work cut out for us to make sure that all Wisconsin families have the opportunity to build a better, more secure future for themselves.

Five years into the nation’s recovery from recession, Wisconsin’s working families remain considerably worse off than they were before. Nearly three-quarters of a million Wisconsinites lived in poverty in 2014, according to a recent release of new Census data, which is 150,000 more than in 2007.  Poverty is more prevalent among children than adults, with about 1 in 6 Wisconsin kids in poverty last year.

The typical Wisconsin household earned significantly less in 2014 than a typical household in 2007 – about 9% less when the figures are adjusted for inflation. That drop in income makes it harder for families to put food on the table, pay car repair bills, save for their children’s educations, and make other investments that help them climb the economic ladder.

Everyone in Wisconsin should get an equal shot at working towards a secure economic future, but the new numbers show we have a long way to go to meet that challenge. Black children in Wisconsin are more than four times as likely as white children to live in a family that can’t afford the basic necessities, and income for black households was less than half of that for white households.

The Wisconsin Council on Children and Families (WCCF) has recommended a number of measures to help all Wisconsinites have the opportunity to build a better life for themselves and their kids.  Those policy recommendations include the following:

Wisconsin’s success as a state depends on opportunity for everyone. When we fail to achieve this, we all suffer and have a lower quality of life. Paying workers enough to make ends meet, having quality child care for  young kids so parents can go to work, being able to see a doctor and stay healthy—all of these things build economic security for everyone, and help families make ends meet.

Read more about the new data in the press release WCCF issued recently. It In addition to summarizing and commenting on the state-level numbers released today, the press release includes two tables pulling together data relating to income, poverty and health insurance for each of the 23 largest WI counties.