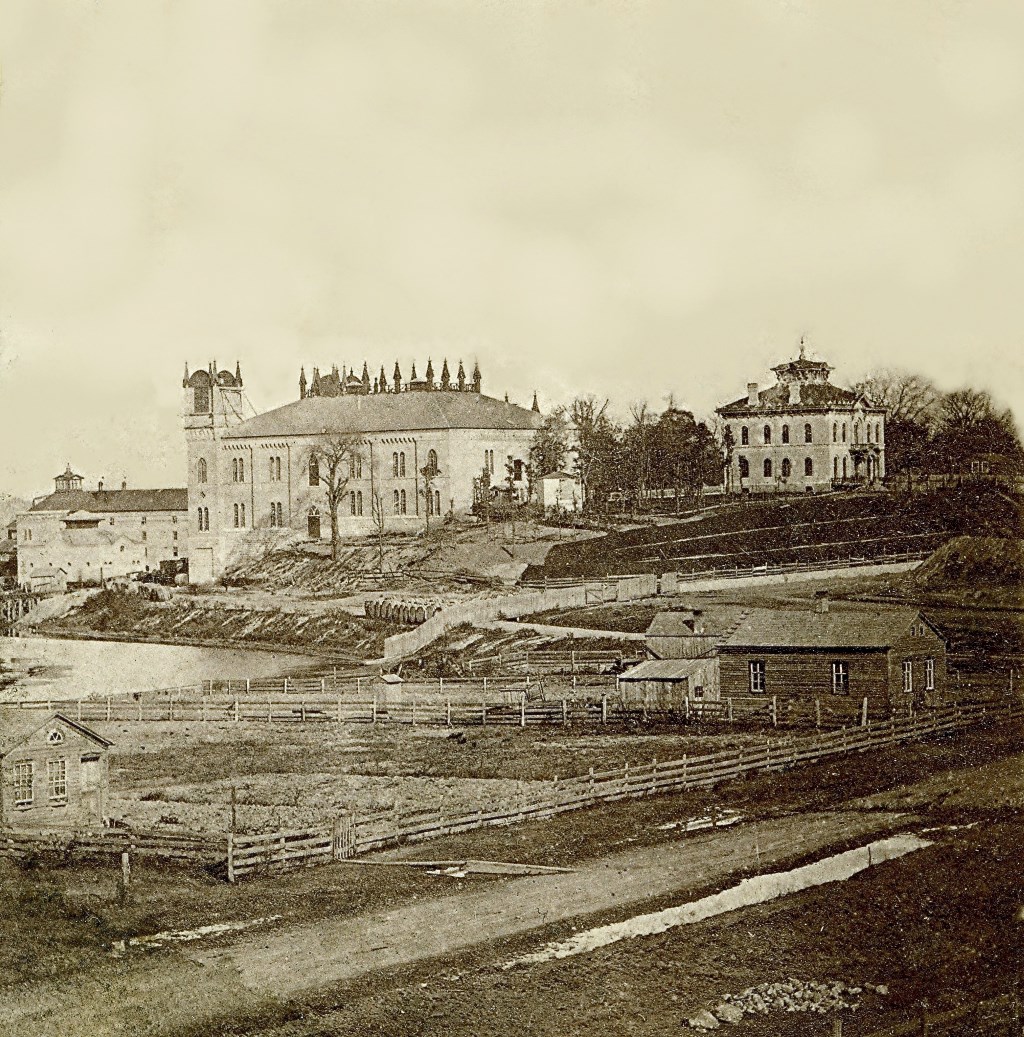 Milwaukee’s first breweries would open at an early date. As a Milwaukee Sentinel story of November 29, 1869 noted, “The first brewery in this city was erected on the south side of the foot of Huron St. in the spring of 1840 by Messrs. Owens, Pawlett and Davis, natives of Wales. It formed the nucleus of what is now known as the “Lake Brewery”. …For upward of two years this small establishment furnished a sufficient quantity of ale and beer to quench the thirst of all lovers of malt liquor in Eastern Wisconsin.”

The city’s second brewery, the story went on, “and the first one to brew lager beer, was appropriately started by a German, Hermann Reuthlisberger… in the spring of 1841. This plant was at Walker’s Point, at the corner of Hanover and Virginia Streets (S. 3rd and W. Virginia). Reuthlisberger’s beer proved very popular, but he was without capital enough to operate, and soon sold his little plant to John B. Meyer, a baker. In 1844 Meyer sold out to his father-in-law, Francis Neukirch, who carried on the business under the Neukirch name. In 1848 Neukirch took into partnership another son-in-law, Charles T. Melms…”

German-style lager beer was a great hit, so business boomed and in 1854 they would move the brewery a few blocks west to a site along the Menomonee River and rename it the Menomonee Brewery. Soon Melms would be running everything and in 1859 would become the sole proprietor. By this time this would be Milwaukee’s largest brewery, and Melms was wealthy enough to build, in 1864, a lovely Italianate mansion. Two years later he would add new and larger brewery buildings in the Gothic style. All are in this stereoview photograph which dates from that period.

One reason for the new brewery was simple. The previous one was in the path of a new railroad route. A new passenger depot was being constructed a few blocks to the northeast. This stretch of railroad would connect all of Milwaukee’s outbound tracks. Prior to this there was no through rail service through Milwaukee. There were three separate depots. The new tracks would be a great help for this growing brewery.

And notice the garden terrace. This was the site of a popular outdoor beer garden. There are plenty of beer barrels in this photo. The train tracks are on the left with a bridge that spanned the river.

As the Sentinel story reported, Melms “lived in lavish style in a showy mansion, and was one of the city’s first ‘beer barons’… When he died in 1869, from lockjaw – said to have come from sitting on a needle, he had the most elaborate funeral the city had seen to that day.” The funeral procession was said to have stretched miles through the city.

Melms death, unfortunately, came at an inopportune time, as he left the family business in substantial debt. This would lead to the sale of the brewery site to the Philip Best Brewing Company, which later became the Pabst Brewing Co. In 1892 the abandoned Melms mansion was torn down.

Recently the Melms name has been resurrected, with two family descendants attempting to revive the old brewing heritage. Currently the Melms Brewing Company’s production is tiny and only available at a handful of outlets as well as at some beer festivals. Hopefully this venture will be a success and restore the Melms name to the ranks of local brewers.