Mozart for the Win

There was no good reason to miss the Milwaukee Symphony Orchestra's production of Cosí fan tutte. It was delightful. 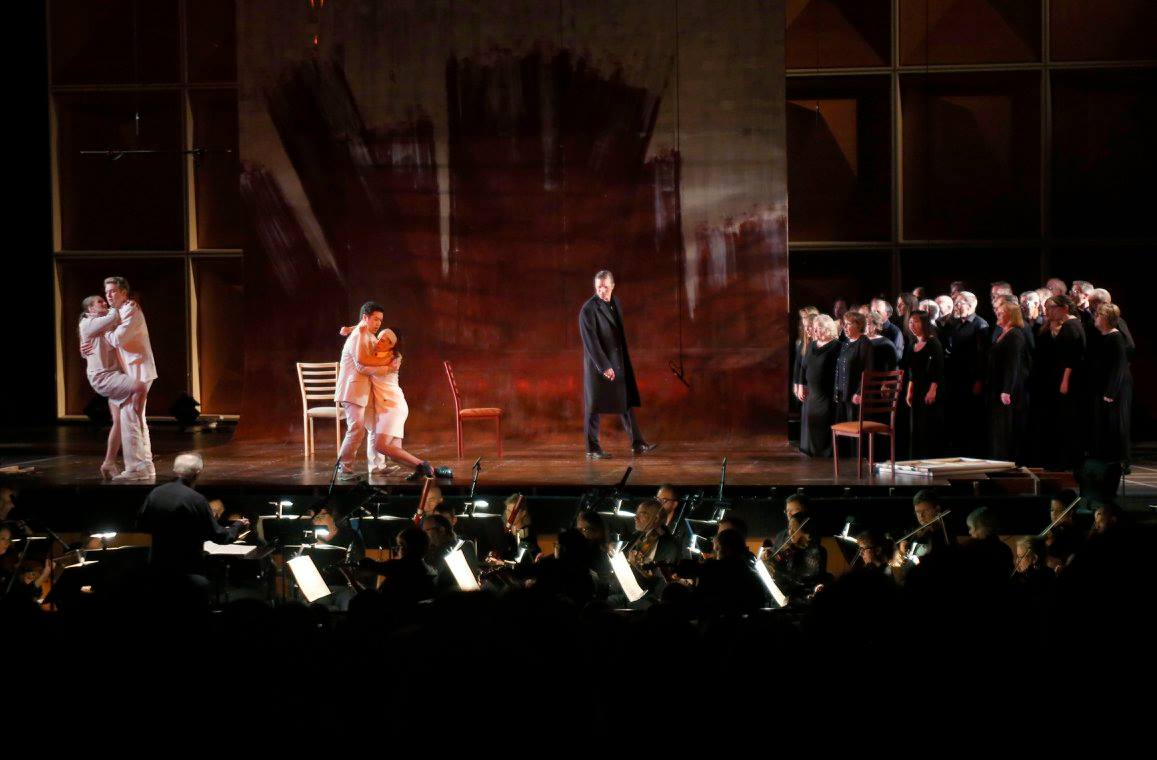 I know that we still have nice weather and that spending time outside is a priority—before winter again bollixes up our happiness—but honestly, folks, getting downtown to the Marcus Center for the Performing Arts this weekend to hear the Milwaukee Symphony Orchestra was well worth the trip indoors. Under the baton of Music Director Edo de Waart, the MSO opened its season with a semi-staged production of W. A. Mozart’s Cosí fan tutte. This season opener should have been packed to the rafters, and it is a shame that it wasn’t. In fact, I cannot think of a single legitimate reason to see an empty seat in Uihlein Hall for a production this good. There was music, drama, comedy, and lots and lots of implied sex. What more do you need?

Dazzling vocal fireworks, precise and elegant orchestral playing, and the inventive stage direction of James Darrah made me wish for more than the three hours and forty-five minutes that whizzed by. The superbly even cast—featuring soprano Brenda Rae as Fiordiligi, mezzo soprano Cecelia Hall as Dorabella, soprano Jennifer Zetlan as Despina, bass-baritone Gordon Bintner as Guglielmo, tenor Andrew Stenson as Ferrando, and baritone Rod Gilfry as Don Alfonso—sang and acted with such a high level of artistry that the audience knew from the get-go that the evening would be great. The Milwaukee Symphony Chorus added its reliably burnished, thrilling sound to the proceedings.

Brenda Rae and Cecelia Hall were mesmerizing. The beauty of their singing caught me wiping a tear from my eye (often, actually). One of the Act I highlights was the trio Soave sia il vento, as Rae, Hall, and Gilfry floated their spellbinding voices over the orchestra. In another high point, Rae rocked Come scoglio as she stood atop her chair of high moral ground and divested herself (quite comically) of shoes, brassiere, and hair clips, all the while brilliantly pouring forth the vocal pyrotechnics and intervallic gymnastics that are signature Mozart.

The power and stylishness of Rod Gilfry made an immediate impression. Charisma gilded his rich baritone, and his manipulative Don Alfonso persona was a compelling force. Don Alfonso’s Trump-like premise is that all women are morally flexible. He bets big that Fiordiligi and Dorabella will abandon Guglielmo and Ferrando’s true love in the face of another opportunity. This cheekiness does not make you rush to his side as a character, but his voice and personality quickly woo the listener into a slightly uncomfortable complicity. We were all at least willing to see how the bet turned out.

Act II brought an even more persuasive round of singing. Rae and Hall delivered one beautiful moment after another; Hall sparkled effortlessly in E amore un ladroncello. Bintner showed off a voice that was honeyed and powerful with naturally easy phrasing. Stenson’s tenor was polished and colorful. Zetlan’s voice was good, and although she didn’t punch at the same weight as the others, her value to the production was her tremendous comic timing and stage vitality.

Designers Cameron Mock and Emily MacDonald created the look of the production (set, lighting, and costumes). The spare set—a large wall and floor assembly that looked not unlike a rusty half-pipe for skateboarders—was decorated with a few chairs, lamps, and a growing number of oversized headshots of the lovers in different incarnations. In the second act, the stage was littered with multiple lamps, sheets, and pillows, giving the impression of an intimate bedroom space that was alternately home to tension, arousal, disillusionment, and, by the end, the mess they all had made. There were times when the singers performed inexplicably in the dark, the glare from the wall of the set distracted slightly, and singers’ departures from the stage seemed dangerously under-lighted. Performing the delicate continuo part—played admirably by cellist Susan Babini and harpsichordist Kevin Murphy—from the corner of the stage was a visually attractive addition and an intelligent move for the singers’ hearing, but the absence of focused lighting on the duo when they played lessened the impact of their being onstage rather than in the pit. Simple costuming—white for the four lovers and black for Don Alfonso and his minion, Despina—may have slightly oversimplified the good/bad character profiles but were visually arresting on the stark stage. As the quartet stripped down to their skivvies, the modesty of their undergarments served to soften the direct sexual nature that Don Alfonso and Despina were setting up for the crossed pairs. The projected supertitles aided comprehension of the libretto; although frequently funny, the updated translation at times felt gratuitously coarse for Mozart opera buffa.

De Waart led outstanding singing and playing that was well-paced, energetic, and fun. From the upper left-hand corner of Mozart’s score to the final bar, Cosí was delightful.

One thought on “Review: Mozart for the Win”