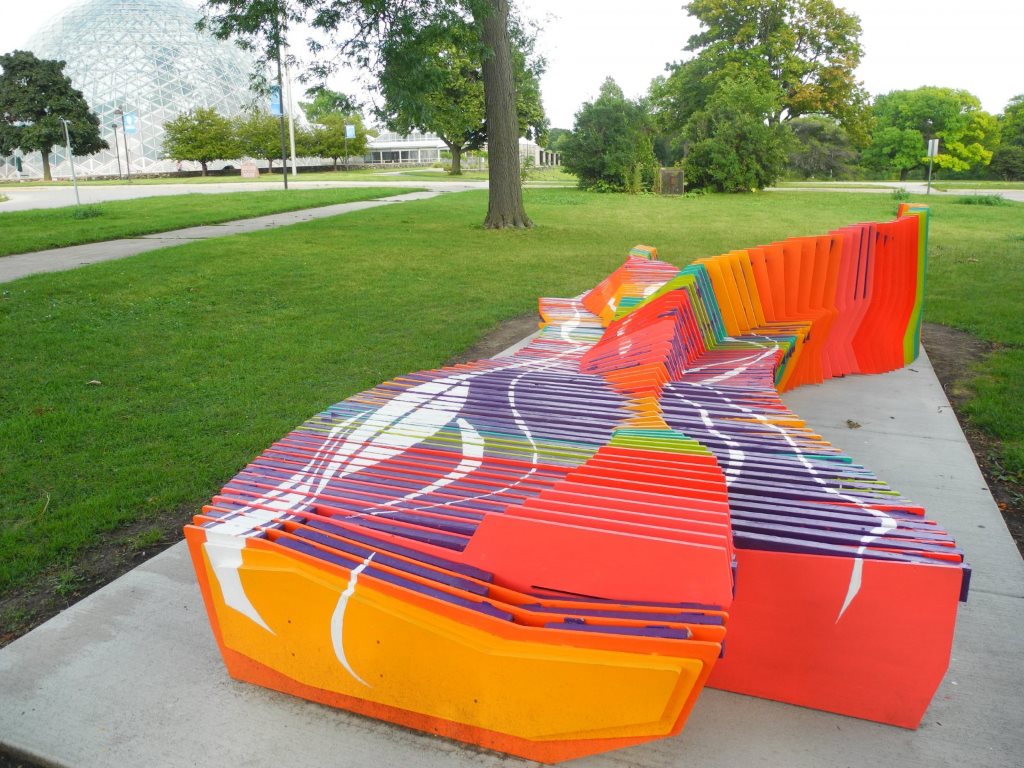 This is the story of a bench. That may seem like a small thing, but behind its creation were many ideas, about how the bench can best accommodate its users, and whether it can help build community through its creation and use. The Drift Bench, as it’s called, can be found today in Mitchell Park on the near South Side. The Artists Working in Education recently finished a collaborative community project to refurbish, paint, and install the innovative bench.

The story of the Drift Bench begins in 2011, when UW-Milwaukee architecture students Adriana Arteaga, Ian Kearns, and Blake Villwock designed it for a collaborative studio course taught by Grace La and James Dallman. The students were inspired by the topography of Wisconsin, including the shapes of snow drifts and sand embankments native to the area. As fellow architecture student and current AWE School Studio Program Director Ali Carlucci recounts: “It was really exciting. The intent was to understand public seating, and the idea of having design that could be set up for dialogue in different ways… something that made more sense for people, the way we sit and talk, the way we shift, and things like that. They also looked at the tectonics of Wisconsin in order to design this bench, so it pulled ideas from our shifting landscape, and from the snow drifts, where there’s constant movement. A static bench is just not enough, but we just kind of accept it daily.”

To capture that sense of movement, the students decided that the bench would be constructed out of interlocking blades of wood, each cut into unique shapes, with small pieces of foam filling in the gaps between each piece. They also conceived a lantern system illuminating the bench from below. As Carlucci explains, “The architecture class collaborated with a furniture manufacturer to help problem solve, push through the design, have students meet real clients, and go through a real manufacturing process… How to take a design, what machines you would need to make it, that whole process of design conception through construction.”

After the class, the Drift Bench was displayed in the UWM School of Architecture and Urban Planning commons, then at the Mitchell International Airport, and finally at Discovery World. Over the ensuing years, the foam between the wooden blades disintegrated, and it became apparent the bench would either need a new home or would be headed for the garbage. When Carlucci’s former classmates saw the bench was in danger of being thrown away, they asked her if AWE could imagine a future use for the bench. AWE agreed to take the bench on until they could come up with a project for it, and kept it in storage for a year.

AWE Executive Director Beth Haskovec said that several factors came into play when deciding where to put the bench. “We have a really strong relationship with Milwaukee County Parks, and we’ve worked with them for a really long time, activating the parks with the kind of art programming that we do.” Additionally, Clarke Square is one of AWE’s targeted neighborhoods, because they received a grant from the Zilber Family Foundation to do art programming there. Eventually, AWE settled on Mitchell Park as the home for the bench.

Artist Kim Loper took a leading role on the project. “My work is focused on the body, and I’m interested in anatomy, in community building, and the space between people,” she says. “The ribs [on the Drift Bench] really look like a skeleton, so that was my jump-in point – the actual design looking like a body, the way that we are on top of this space, body-consciousness, and how we interact with each other.” These were ideas she kept in mind as she and others involved with AWE did some programming for kids in the parks.”

The AWE team decided to replace the Drift Bench’s foam fillers with plywood, which would be much more durable in the outdoors. They scrapped the original lantern scheme as unfeasible, but decided to paint each of the wood pieces in dramatic colors. It was this summer that Loper and her team began working with students. “The colors were decided by a group of Carmen High School students; we worked for two days with them… We talked a lot about the history of the bench, public art, color theory, color psychology, and what did we want the community to feel when they were in that space,” Loper explains. In addition to solid colors, the team decided to incorporate some abstract line work into the design – taken from the body outlines of participating children.

After two days with the high school students, Loper and her team moved the project to Mitchell Park, where all of the painting was to take place. “The main thing about our public art,” Carlucci notes, “is that we’re doing it in public on-site and it stays there. So all the neighbors that help can be a part of that whole process, and even after it’s done, have a lot of access to it – see it every day – it’s a part of their neighborhood.”

Loper recalls, “Originally it was supposed to be by the wading pool deep inside the park, by the rec center, which is where AWE had another mural.” But  that turned out to interfere with pipes connecting to the wading pool, so “we had to move it,” Loper recalls. “So that’s how its home became the front of the Domes. That was great visibility, but we were like, ‘How are we going to get people here? Is this really a spot where people are going to be every day to engage them in that painting and installing process?’ So we would just canvass the neighborhood, and we went into the park and would grab groups of kids, and eventually, we created a presence. So people from across the street on 27th would bring their families over, and they were coming every single day. There was one boy who would always say, ‘I’m here to work,’ like he considered it his job. So there were a lot of hands.”

Now that the bench has been installed in Mitchell Park, AWE plans to leave it there as long as it stays in good condition. When the bench eventually does degrade, the group plans to reuse the concrete block at its base for another project. But for the moment, the group is happy that people are using the bench. Haskovec says, “That’s what it was designed for, originally – people talking to each other, being together.”

Loper ruminates, “One thing that’s really cool is that if it was deeper in the park, it would serve that population from Mitchell Park. But because it’s out front, there are people who wouldn’t normally see it who are coming, and they’re able to interact with the people who ‘own’ it – the community who ‘owns’ it. So there’s this exchange of people who are coming to the park, and people for whom that space is really their own. And there’s an evolution of community that’s building around the bench, and I think that’s really beautiful.” 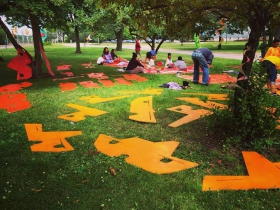 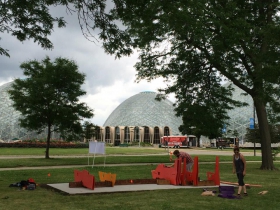 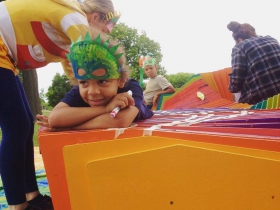 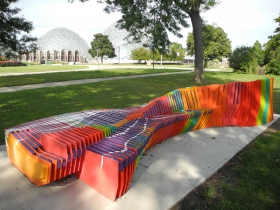 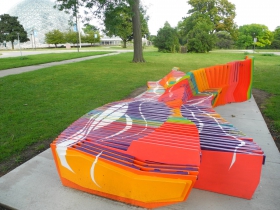 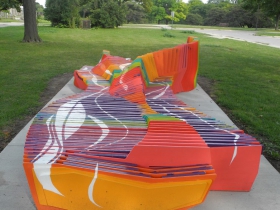 3 thoughts on “The Spirit of the Drift Bench”