The Rep Goes Back Home Again 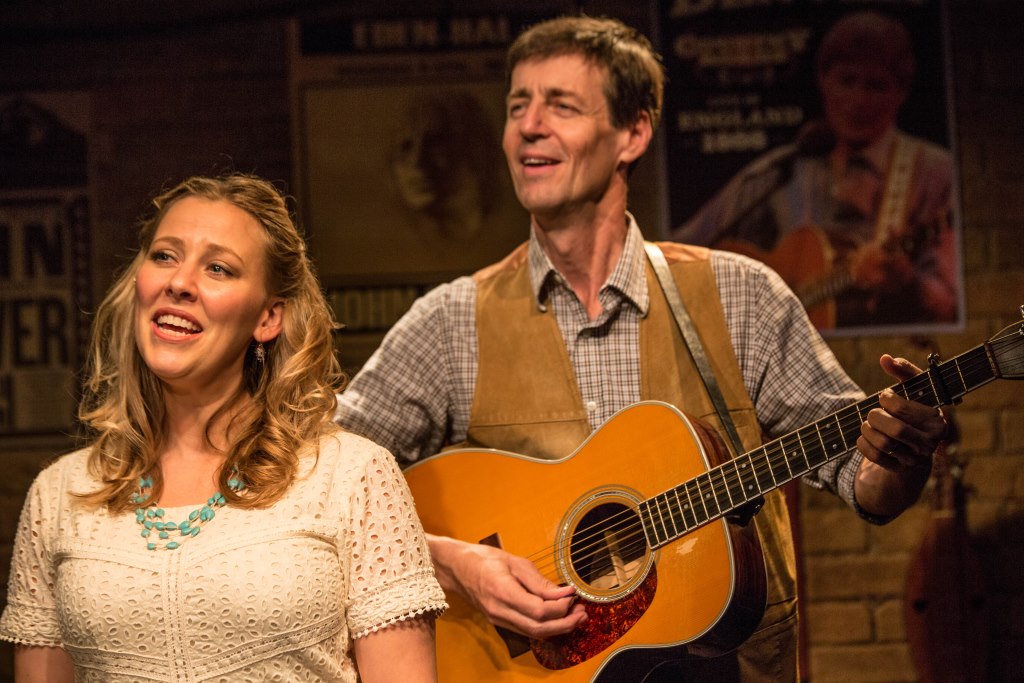 Milwaukee Repertory Theater presents the world premiere production of Back Home Again: On The Road With John Denver in the Stackner Cabaret Sept 11 to Nov 8, 2015. Left to right: Katie Deal and David Lutken. Photo by Tony Duvall.

Once again through Nov. 8 the Milwaukee Rep’s Stackner Cabaret is building a new attraction around a popular music figure. This time it’s “Back Home Again: On the Road With John Denver,” suggesting theatergoers will be transported inside a celebrity’s personal world along with a parade of top hits.

Except this time we are really on the road with a John Denver sideman in a somewhat fictionalized piece combining first class musicianship with shaky dramatic underpinnings.

It was created for the Stackner by Randal Myler and Dan Wheetman, who really was a Denver sidekick for eight years and remains a central player-songwriter with the band Marley’s Ghost while also authoring several theater musicals.

The tale is told by “Danny,” whose life on the road, rapturous romance turning to marital failure and love of Aspen at snowtime mirror parts of Denver’s life —  without having to address directly the downside or outcome of Denver’s turmoils of rage, alcohol and death at age 53 in a private plane crash (flying was a passion for Denver that rivaled music).

The production opens with Denver himself on tape. His famous song output (mostly in the 1970s) is always waiting to pop out of the duet onstage as they narrate the vagaries of life on the road.

So there is no short shrift to the name in the title nor to songs made famous by him including several written by friends or backup band-mates (including Wheetman himself) such as “Grandma’s Feather Bed” and “Thank God I’m a Country Boy.”

To provide even more variety to the many signature creations that sold more records than Elvis Presley and enraptured a generation (such as “Annie’s Song,” “Sunshine on My Shoulders,” “Rocky Mountain High” and that enormous hit for Peter Paul and Mary, “Leaving on a Jet Plane”), the Stackner show reminds us of the roots and influences on Henry John Deutschendorf  Jr. (Denver’s birth name). It sorties into hootenannies and famous foot stompers from the likes of Hank Williams and Chuck Berry. Never think when the sentimental musings get thick that another show stopper isn’t just around the corner.

Denver was criticized by country old-timers as too pop, by folkies as too country, by critics as too naked in his affections and too pedestrian in some rhymes (right time = nighttime, share with = care with). In truth his melodic gifts and the genuineness of his feelings (he was devoted to the environment and space exploration) always kept him more popular with the people who bought the records than the critics who wrote about them. And his best songs are timelessly memorable, as if a blond cherub in rimless glasses was conjuring up our youthful passions.

Still, sticking only with Denver for a two-act outing would have been too much, since there is something immensely identifiable and similar in his best known tunes – a phrasing that immediately brings to mind his main themes and lyrical methods.

“Back Home Again” is twice as long as the narrative framework deserves and somewhat meandering and forced in its constant song insertions. But some remarkable musicality keeps the audience engaged – in fact, the performers carry the story and their skills lift it into tolerance.

David M. Lutken is not only Danny as narrator but also makes his diversity on guitar, banjo and mouth organ seem like a full orchestra. As demonstrated previously at the Stackner as Woody Guthrie in “Woody Sez,” Lutken has an engaging twangy manner that fits even this manifestation of a road musician. Variety and tempo polish the best segments of all the musical pieces and Lutken’s relaxed and folksy manner drive the dialog better than warranted.

Lutken is trading hypnotic harmonies with Katie Deal, a powerful country music singer with a great smile. She delicately blends her voice into background vocalist when required or takes over as stage front powerhouse (her natural forte) when Lutken turns into the softer blender (while always remaining the main instrumentalist).

It is a dovetailing of talents ingratiating the audience to join in for a good time. It’s hard to divide the credit among director Myler, music director Wheetman (both also the authors) and these two singers, but all create a sense of compatibility and vocal ease.

Lutken deserves an even greater round of recognition. He seems so naturally at home in these roles that patrons may not sense the artistry and rapport he creates when the material falters. He is an accomplished actor who is also a fine musician. Deal is a fine country singer on the way to becoming an accomplished actor, but Lutken goes out of his way to make her seem like a full partner.

Back Home Again: On the Road With John Denver 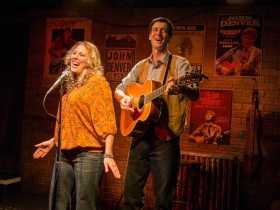 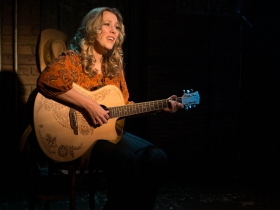 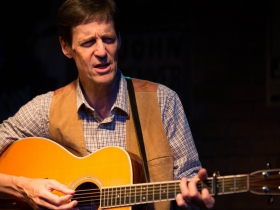 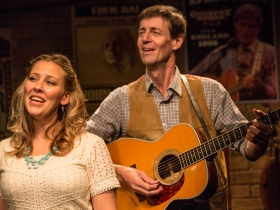 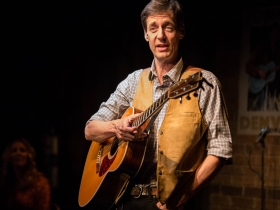