By Jabril Faraj, Milwaukee Neighborhood News Service - Sep 10th, 2015 10:13 am
Get a daily rundown of the top stories on Urban Milwaukee 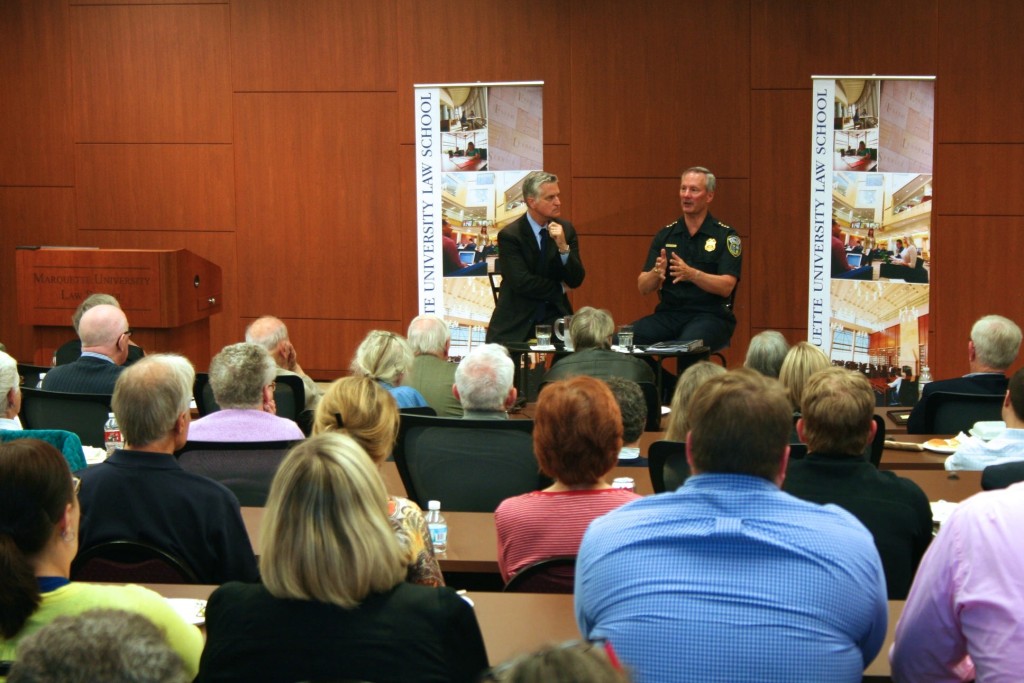 Milwaukee Police Department Chief Edward Flynn is calling for stricter sentencing for violent offenders to counter the city’s spike in homicides, which are up almost 70 percent this year, compared to the same time period last year. Flynn has consistently criticized Wisconsin gun policy and called for harsher sentences for individuals carrying firearms illegally.

Flynn, who made his remarks recently at a public forum hosted by Mike Gousha at Marquette University, quickly dismissed a community-based policing model that has seen success in Racine, while acknowledging that his views might not be popular.

“I know sentences are not fashionable right now for a wide variety of reasons but I don’t know how to get into this decision-matrix of immature brains that are carrying guns and shooting each other [if] they don’t perceive there is a reliable sanction awaiting them for that.”

Early this year, Flynn attended a meeting of the Major Cities Chiefs Police Association in Washington, D.C., that focused on “policy and legislative issues,” according to the group’s website. He said cities similar to Milwaukee, such as Baltimore, St. Louis, Chicago and Houston, that have a significant amount of inter-generational poverty in specific areas and recently weakened gun laws have also experienced a dramatic increase in homicides. 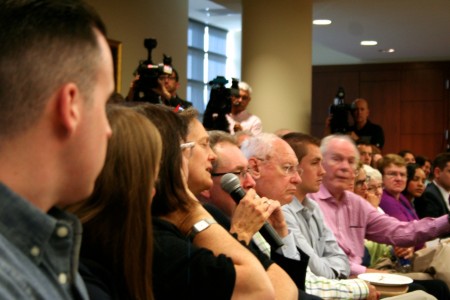 An attendee asks a question about black male incarceration. Wisconsin imprisons the highest percentage of black men of any state at 13 percent, a rate twice the national average. Photo by Jabril Faraj.

Wisconsin incarcerates black men at a rate of 13 percent, almost twice that of the country and three percentage points higher than Oklahoma, which is the state second most likely to incarcerate African-American men. Almost 70 percent of the Wisconsin’s African-American population resides in Milwaukee County. A 2007 report from UW-Milwaukee’s Marc Levine noted that, in 2005, the jobless rate among black men in Milwaukee was more than 43 percent. By 2009, only 47 percent of Milwaukee’s working-age (16-64 years old) black males were employed, a significant decrease from almost 74 percent employment in 1970.

“If you’re an African-American in Milwaukee, you are 18 times more likely to get shot … than you are if you’re a white person,” Flynn said. “From my point of view in the city of Milwaukee, who’s incarcerated is directly related to who’s being victimized … And those victims have a right to expect some level of justice.”

Flynn said he would like to see more investment in “the social safety network” rather than resources being directed solely to the police department because “then maybe we wouldn’t need so many cops.”

However, he also said the increase in homicides is not a result of drug-related violence. Flynn attributes the recent spike in homicides to personal arguments, fights and retaliation, which he said make up more than 30 percent of all shooting deaths in the city. “There is a slice of the criminally inclined community for which violence to maintain status with one’s peers is absolutely normal,” he said.

“When it comes to illegal firearms possession and use, if they don’t go away they’re not going to learn anything. Some people need a prison ministry … and I think these young fellas do,” Flynn said to the largely white audience.

Flynn sharply criticized Wisconsin’s 2011 concealed carry legislation. He said elected officials missed an opportunity to strengthen the penalty for possessing a firearm illegally. Currently, the infraction carries a misdemeanor charge regardless of the number of violations.

The MPD chief said he’d like to see that penalty increased to a felony charge. “If you’re a young criminal and the choice is [to] not carry a gun and maybe get shot … or carry a gun and get tried for a misdemeanor, what are you rationally going to decide to do? You’re going to carry the gun. It’s more dangerous to get caught without it.”

He also noted that under the law only felons are not allowed to acquire a concealed carry permit. Flynn, who has previously served as chief of police in two states with concealed carry laws, said he has nothing against the legislation but takes issue with the current law. The way it is written, a subset of “career criminals,” who have been convicted of three or more misdemeanors over the course of five years but are not convicted felons, could still be eligible to legally carry a firearm.

“I don’t think, for a minute, when the founders came up with the Second Amendment, they had the intention of arming pirates, brigands or highwaymen,” he said, referring to the right to bear arms.

Flynn also said the police department, which makes 12,000 to 15,000 felony arrests every year and has seized 1,600 guns already this year, could use more help when it comes to prosecuting individuals. “Getting the guns and making the arrest isn’t my problem. My problem is getting them charged and getting them prosecuted.”

But, in spite of the 110 homicides Milwaukee has seen so far this year, Flynn said most people shouldn’t worry about being unsafe. “We have our version of Chicago’s Englewood,” he said. “It’s dangerous there and it’s very dangerous for those young men who live there and even more dangerous for those who are part of the subculture of crime. And, there are vast areas of Milwaukee in which nothing happens.”

He noted that Milwaukee, which has been consistently listed in recent years as one of the most segregated cities in America, is seeing an increasing amount of investment downtown.

“It’s dangerous to be a young black man living in a neighborhood characterized by inter-generational poverty,” said Flynn. “I think people are getting a better general sense of what the real Milwaukee is. But, yeah, we’ve got a moral obligation to deal with the extraordinary levels of violence that are plaguing those kinds of neighborhoods in every big city in America.”