Wisconsin Women Earn 81% Of What Men Do

The gap has fallen from 59 cents for every dollar earned by men to 81 cents. Why does the gap persist?

By Jon Peacock, Wisconsin Budget Project - Aug 31st, 2015 12:40 pm
Get a daily rundown of the top stories on Urban Milwaukee

Imagine working 10 weeks each year for free. That’s a good mental exercise this month, when we celebrated Women’s Equality Day, because the income of a typical woman in Wisconsin is comparable to that of man who is making median wages but working without compensation for 10 weeks a year, and the disparity is even greater for minority women.

Women’s Equality Day is a time to celebrate the passage of the 19th Amendment to the U.S Constitution 95 years ago, and also an appropriate time to take a look at the progress that has been made in closing gaps between men and women. An analysis of women’s earnings relative to men’s reveals that inequality has lessened significantly in Wisconsin over the last several decades, but a substantial pay gap remains.

The following chart uses Census Bureau data from the Current Population Survey (CPS) to show the ratio of median income for Wisconsin women to the median for men in our state. It illustrates that in 1979-80 the typical woman earned just 59 cents for every dollar that an average male Wisconsinite earned. In 2012-13 that ratio had improved to 81 percent, but that still leaves a long way to go to reach parity between men and women. The 19 percent pay gap is equivalent to working almost 400 hours a year for free. 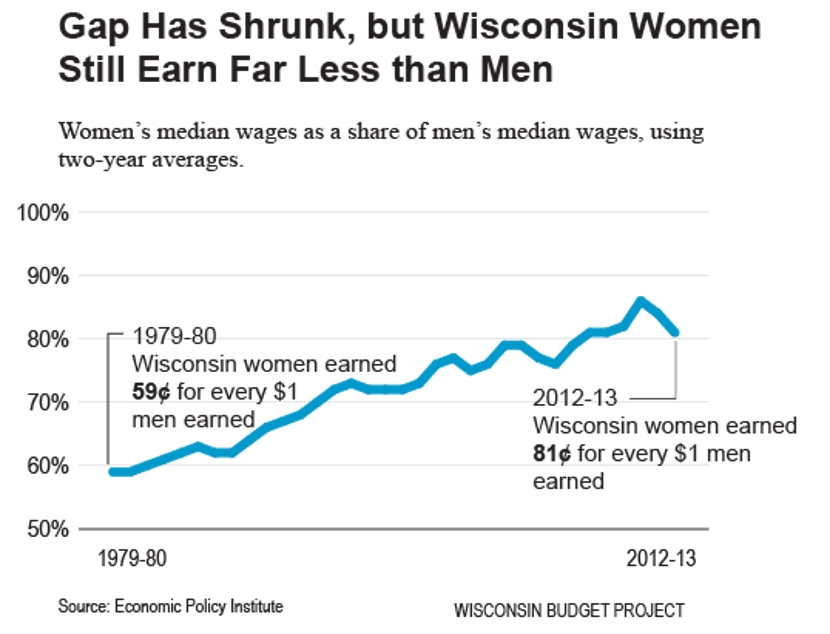 (Technical notes: Because the CPS data is based on a relatively small survey sample, we used two-year averages to dampen the year-to-year fluctuations. More current CPS data will be released in mid-September.)

A significant factor in the reduction of the wage gap is that women are now getting more college and advanced degrees than men. But that should mean that women earn more than men, which makes the persistence of a substantial earnings gap all the more disappointing.

It is sometimes argued that the disparity between the earnings of men and women results largely from factors like the professions that women choose and longer absences from the workforce for parenting. Those differences account for some of the earnings gap; however, studies that control for those sorts of variables still find a large gap between the income of men and women. (See, for example, this recent fact sheet titled, “The Gender Wage Gap by Occupation and by Race and Ethnicity.”)

Even as college graduates are just starting their careers, the pay gap is apparent. According to a 2012 report – Graduating to a Pay Gap,  by the American Association of University Women — after only one year in the workforce, women working full time made just $38,000 a year, compared to $45,000 for men in the same profession. And from there the pay gap compounds significantly over time.

About 60 percent of the wage gap can be attributed to known factors such as choice of occupation, work experience, and union status – according to an issue brief written in 2013 by the Center for American Progress (CAP) that summarizes research about the causes of income disparities. However, the other 40 percent, which amounts to more than $4,000 per year, is “unexplained” – meaning that there is no clear, measureable reason for a difference in pay. As the CAP issue brief says:

“This leaves us with possible explanations that range from overt sexism to unintentional gender-based discrimination to reluctance among women to negotiate for higher pay.”

One way to lessen the pay gap is to get more women into leadership positions in the business world, according to an article in the July 2015 issue of the Journal of Financial Economics. The authors’ research indicates that the pay gap “is significantly reduced when women hold positions of leadership in the hiring firm.”

But policymakers shouldn’t sit back and wait for employers to hire more women in management positions. They should help women obtain fair wages, and the California legislature is on the verge of taking some modest steps to accomplish that. They are completing work on a bipartisan bill that will make it harder for employers to justify paying men more than women for “substantially similar” work, and will prohibit employers from retaliating against women who ask about or discuss the pay of male colleagues. (Read more here.)

Today, we celebrate 95 years since the Constitution gave women the same rights as men in the voting booth. However, we still have work to do to ensure they are also treated equally in the workplace.