He’s the only Republican to present a specific plan, but its results might explain why.

Scott Walker recently issued his plan to “repeal and replace” ObamaCare. While most details are vague, it’s possible to do an initial estimate of how the plan might work, and who is helped and who is hurt. Walker proposes to remove all federal standards for what benefits must be included in insurance plans, leaving that up to the states. It allows plans to be sold across state lines, so a plan approved in any state could be sold in every state.

In some ways, WalkerCare is modeled on ObamaCare. Like it, Walker’s plan uses refundable tax credits to subsidize the purchase of insurance policies on the individual market. While these credits would increase with age, they do not vary with income.

Using the Kaiser Family Foundation interactive subsidy calculator and the cost of a Silver plan in Milwaukee, I calculated the net cost of insurance for people at three income levels: $25,000, $35,000, and $50,000, ranging from age 21 to 63. I then converted this into the percentage of her income the person would pay for insurance, to compare Walker’s proposal to Obamacare. The result is shown in the graph. 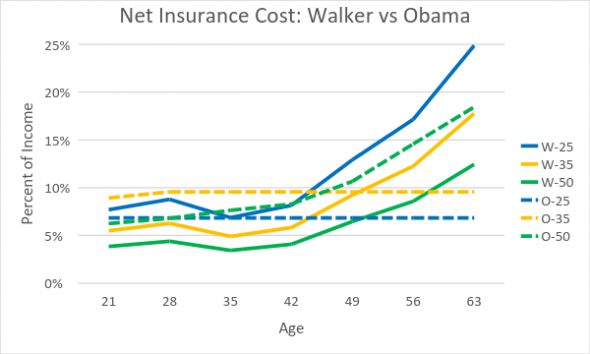 Those who gain from the Walker plan are younger people and more prosperous. A person making $25,000 (the dashed blue line for ObamaCare) would be worse off under WalkerCare (solid blue line) at any age, but the gap rises rapidly once they reach their 40s. At age 63, they would be paying about a quarter of their income under WalkerCare. This compares to a cap of 6.8 percent under ObamaCare.

Any person making $35,000 (dashed yellow line) would be ahead under WalkerCare (solid yellow line) until they reached her 50s. By their 60s they would be paying about 18 percent of their income with WalkerCare. For comparison, the ObamaCare cap is set at 9.6 percent.

A person making $50,000 would be ahead under WalkerCare (solid green line) at any age. The ObamaCare subsidies cut off for anyone making over 400 percent of the poverty level. $50,000 falls just above that line.

At a time when there is growing concern about income inequality, it is puzzling to see a proposal to increase inequality. Under WalkerCare, billionaires would get the same tax credit as those just barely getting by.

WalkerCare also has the effect of shifting risk from large institutions—the government and insurance companies—to the individual. This is contrary to the basic rationale behind insurance. Fire insurance, for instance, shifts risk from the homeowner to the insurance company, which can average any loss over many policies.

Moving risk from individuals to society is also part of the rationale behind various social programs, including Social Security and Medicare—and ObamaCare. Compared to ObamaCare, WalkerCare shifts risks, such as the risk of escalating health costs, to individuals, particularly low-income individuals.

Generally large organizations—whether the government or insurance companies—have more bargaining power in the marketplace than individuals do. Yet WalkerCare avoids taking advantage of this market power to drive down costs.

Of necessity my earlier calculations illustrated in the graph assumed that the price and features of health care policies under WalkerCare would be similar to those available under ObamaCare policies. But this may be a rash assumption.

One obvious result of WalkerCare, for instance, is that the market for this insurance among people over 40 making $25,000 would largely disappear, reflecting the unaffordability of the net premiums after the WalkerCare tax credits.

Something very similar occurs with older people making $35,000, but with a twist. People with no health problems might decide to risk going without insurance, while those in poor health, and expecting large medical bills, would make the financial sacrifice to pay the premium to keep the coverage. This would start the much-feared “death spiral,” as healthy people leave, causing the cost per-person to rise, causing premiums to rise, causing more people to leave until the whole thing collapses. This spiral has again and again caused the death of insurance plans aimed at covering high-risk people.

In order to prevent a death spiral, companies offering policies with good coverage would be forced to carefully select the people they covered, rejecting those likely to incur the highest costs and rejecting claims for pre-existing conditions. As a result those most in need of medical insurance would be least likely to find it.

The result is likely to look very much like the individual insurance market prior to ObamaCare, when insurance policies varied widely and many people had none. At the high end were policies whose coverage largely met the ObamaCare requirements, but were available only to those with excellent health prospects and pre-existing conditions were generally excluded. At the bottom were policies open to nearly everyone, but with miserable coverage, sometimes called “junk insurance.” In the middle were policies with less strict underwriting, but mediocre coverage.

A simple Google search finds endless examples of the pre-ObamaCare junk insurance policies. For example, one man had a $150,000 hospital policy but discovered that only $10,000 of that was for hospital services. The rest was for room and board. Theoretically, he could have stayed in the hospital for months so long as it didn’t treat him. He had to declare bankruptcy. There are numerous other examples of policies that were totally inadequate, including those with annual caps on benefits of $1,000 to $15,000, not covering prescription drugs, with unreasonably low payments for doctors’ visits.

Between the elimination of federal standards for health care insurance and the ability to sell insurance in any state so long as it was approved in one state, it’s likely that junk insurance would return with a vengeance under WalkerCare. Many people who think they have coverage would likely have a rude awakening when they need coverage.

What about the higher end? Policies meeting the ObamaCare standards might still be financially viable so long as the insurers carefully vetted to whom they sold the policies, adjusted premiums based on projected costs, and excluded coverage of pre-existing conditions.

But WalkerCare seems to throw a monkey wrench into this scenario when the plan talks about pre-existing conditions. Supposedly WalkerCare would “ensure individuals with pre-existing conditions would be protected….. when switching between plans… Provided individuals maintain continuous, creditable coverage, no one would see their premiums jump because of a health issue or be shut out of access to affordable health insurance because of a new diagnosis or a pre-existing medical condition.”

This wording is sufficiently ambiguous to generate a raft of questions. What constitutes “credible coverage”? Since Walker proposes to drop the federal ObamaCare standards and policies can be sold across state lines, perhaps any policy legal in any state offers “credible coverage.” This could lead to people, while healthy, buying a low cost, low benefit plan in order to maintain continuous coverage. Then, if faced with an expensive, long-term health problem, they enroll in an expensive, good-benefit plan. But WalkerCare would seem to require that plan to cover the enrollee’s pre-existing condition. This would likely trigger a death spiral for the high-end plans if people gravitated to them when they developed health problems.

The plan does seem to tacitly recognize that under WalkerCare some people would fall through the cracks. Those who allowed their insurance to lapse would not be protected against pre-existing conditions.

In a tacit acknowledgement of the gaps, Walker proposes to fill them with federal funding: “Under my plan, the federal government would provide funds to states to help provide coverage to those with pre-existing medical conditions who still do not have insurance coverage and who couldn’t afford it before ObamaCare.” It suggests that states be subsidized to set up high-risk pools. The trouble is that high-risk pools are very expensive and require heavy government subsidies. This would imply the need for new taxes, which create particular problems for Republican candidates.

Walker’s plan deals briefly with Medicaid, essentially turning it into block payments. He does not discuss how to counteract the inherent incentive this creates for states to further cut benefits and payments to providers.

The same day Walker plan came out, Republican Marco Rubio issued his plan in the form of an article in Politico. It is even more vague than the Walker plan and impossible to analyze. Most of the other candidates have all said they would repeal ObamaCare, but have not suggested what, if anything, they would replace it with. Republican Bobby Jindal attacked Walker’s plan from the right, calling it a “new entitlement program.” Perhaps it is no coincidence that, according to Gallup Healthway, Louisiana has the 4th highest rate of people without health insurance.

There is a set of models used in business and engineering called “constrained optimization,” in which the object is to find the best solution that satisfies a set of constraints. Sometimes, however, the problem is found to be “infeasible”—there is no solution that satisfies the constraints. It appears in trying to replace ObamaCare, Republicans have succeeded in putting in so many constraints on what might be acceptable that there is no feasible solution.