Tale of a Tumbling Team

The Milwaukee Flyers is a non-profit that helps kids learn acrobatic tricks -- and life lessons. 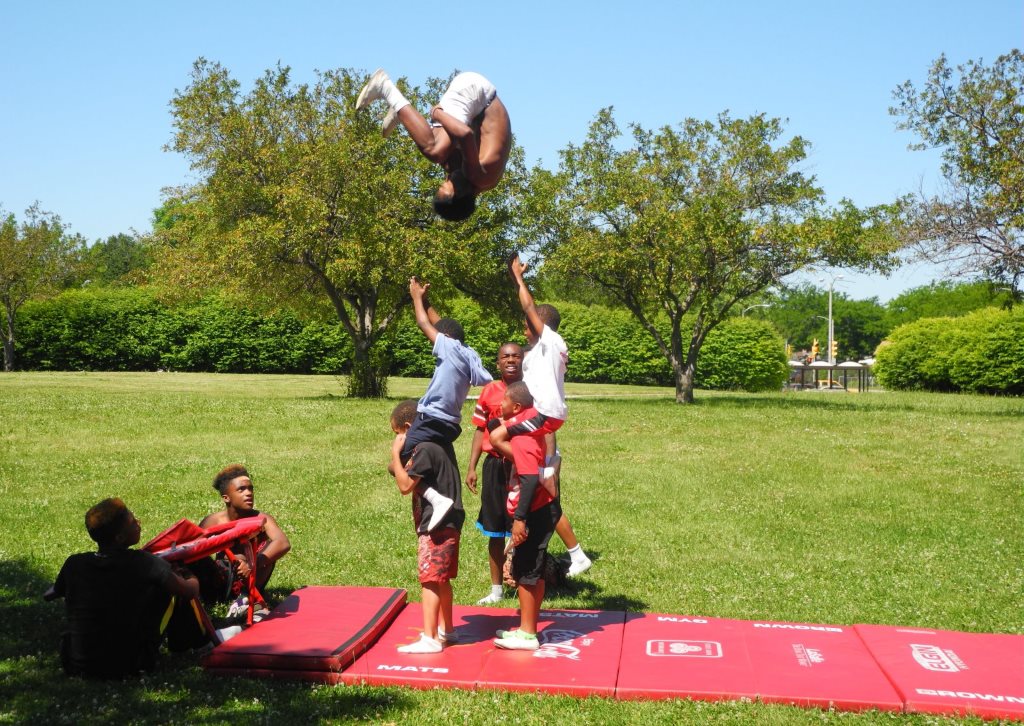 One day I could hear gasps from the crowd in Cathedral Square Park, so I walked towards the noise to see what this commotion was about. I found a group of boys and men known as the Milwaukee Flyers Tumbling Team performing their set at Bastille Days – doing dizzying flips high up in the air, often over each other’s heads. It made me wonder about their story

The Milwaukee Flyers Tumbling Team was founded in 2005 by brothers Charles, Allen, and Tyrell Grant. They started it with the goal of giving young people in their community a productive outlet for their energy. According to Charles, “We wanted to give at-risk youth something positive to do, because we once were at-risk youth.” The three spent their early years in Chicago’s notorious Cabrini-Green housing project, but Allen and Tyrell found a creative and athletic outlet through the Jessie White Tumbling Team. After being rejected from the team at the ages of 5 and 4, Allen and Tyrell persevered and made the team the following year. They continued learning gymnastics, and were among those invited to tour with Ringling Brothers and Barnum and Bailey Circus during their teenage years. In the meantime, their mother moved to Milwaukee, and brought Charles with her. While his brothers were touring with the circus, Charles struggled – landing in juvenile detention centers and dropping out of high school. After four years on the road, Allen and Tyrell joined their family in Milwaukee, and Charles started to turn things around for himself by attending GED classes.

When the brothers started contemplating things they could do, the idea of a tumbling team seemed a natural. “Man, we’ve got skills from Jessie White, and skills from the Ringling Brothers,” Allen suggested, “so let’s put this together and make our own thing.” Allen became the lead coach, with Charles, Eric Wilson, and Richard Williams also coaching. Charles is also the group’s general manager and board president. The board of directors also includes Eric Wilson as vice-president, Carey Nemo as secretary, James Henry, and Sequoia Phillips. The board members are all people the three brothers grew up with as family members and friends. “Sequoia works with the Peace Corps. James Henry worked with MPS,” Charles explains. “Carey Nemo is a social worker for the welfare department. They’re people that are familiar with youth, and that’s how we picked them to help out.”

Milwaukee Flyers does not charge any tuition fees for children to take part in the program. This makes it possible for any kid to participate, something that is very important to the Grant brothers. When asked how the group funds itself, Charles explains, “We’re a nonprofit organization, so we search for grants here and there. We received our first grant last year from the Green Bay Packers Foundation, then we got a little grant from Walmart, but pretty much, that’s how we fund it. Or, depending on events, we charge a service fee to come out and do a performance. That really doesn’t generate a whole lot of income, but it keeps us afloat.”

They found a supportive partner in the Martin Luther King Jr. Community Center (1531 W. Vliet Street), which gave them a space to practice rent-free. Charles explained, “The thing is, they just require each kid to have a membership, and we know that none of these kids can afford coaching and gymnastic training, so we are free of charge.” The group holds practices at the King Center three times per week during the school year, with two practices on weeknights and one on Saturdays.

Beginners practice along side more advanced students during the year, with the most advanced tumblers forming an “A team” that does the majority of the group’s performances. The coaches said that motivation is high within the group, especially because most of the kids in the group are striving to make the A team. Though the current team is almost entirely made up of boys, the brothers said they would welcome more girls to take part. Says Charles: “The girls tend to feel intimidated because they see all guys, and they want to join, but they’re like, ‘It’s a lot of boys,’ you know.” But Allen adds: “We don’t discriminate; we’ll train anyone.”

The age range of the group is quite broad, with kids as young as six performing alongside 18 year olds. “In the summer, we focus on our tumblers because we do a lot of performances, so we don’t have time to fully devote our time to training them in the basics,” Charles says. “But in the fall, it’s more like an after school program, so any kid can join. Allen will work with the advanced tumblers, I’ll work with the beginner tumblers to teach them cartwheels, round-offs, rolls, etc., and then you have your intermediates who are working on their handsprings, and so forth. So we kind of branch them out in three different groups during the fall.”

The brothers hope to pass on positive life lessons as well. The first hour of the weeknight practices is devoted to a mentorship session. Charles said, “We talk about goals, responsibilities, home issues, school issues, just to try to find out what’s going on in their personal lives as well as here. We personally travel to their schools and sit down with their teachers, check on their grades, make sure they’re doing what they need to be doing. We also get their report cards, and when they’re falling behind, we get them tutoring… Whatever we can do to keep these guys on the positive right track, that’s what we do.”

Sometimes the group will take on heavier issues during the mentorship sessions, including anger and depression. “We make sure that it ain’t all about tumbling,” Allen says. “It’s about keeping you on the right path, keeping you walking straight. If you can’t do a little simple thing like coming in and telling us about your day, and what’s wrong with you, then there’s an issue there. Tumbling is second. We always do tumbling – we can tumble all day – but, for the mentoring, we’re going to need to know what’s going on with you, so we can help you out.”

Allen took one of the older students to a job interview on the day I visited the Flyers. The Milwaukee Flyers also takes the kids on field trips outside of Milwaukee. Most recently, the group went camping in northern Wisconsin. “We took 23 of them up north camping… and like, 90 percent of them had never been camping,” Allen recounts “We played a lot of games, just to take their minds off here – the inner city – and to show them something different.”

While I talked to the coaches, the kids laid the mats out by themselves and started their practice. Without any adult telling them what to do, they went through a series of flips. Allen explains: “A lot of them have been here for years, since they were like six years old, and it’s like their home. We started with like six kids, and now we’ve got over 50 kids… We drill them nonstop, so it’s consistent. They turn into little coaches, and then they know who’s been here the longest… Then they get in the role and they’re like, ‘Oh, I want to be a coach!’ and they come down here to show leadership.”

The Grant brothers say that the community support for the Milwaukee Flyers is evident whenever they walk around the neighborhood. Says Allen: “Every time we’re outside, people are like, ‘Eh, you’re a Flyer, man! Even the police – we once would hide from the police – but now it’s like, the police see us now, and they say, ‘Hi, how are you doing? You got a performance for us today?’”

I asked some of the kids why they do tumbling, and here are their answers:

D’Antonio: “I’ve been on the tumbling team for a year, and I like it because it helps me with my life and stuff. It helps me practice.”

Deandre, 15: “I like it because, when I first came here, I wasn’t that good, and I got good. It made me feel like I could do anything.”

Tomeleon, 14: “I like it because it helps me build my strength and it helps me stay focused.”

Jaydeon: “I like being on the team, because this is my talent. I’m good at it, and I want to keep being good at it. I don’t want to lose it.”

Amir, 18: “One thing I like about the Flyers is that they keep me away from negative activities, and they try their hardest to keep us positive, and to keep us going down the right path.”

The Milwaukee Flyers have had a busy performing season during the summer, with over 25 appearances scheduled in August alone. They performed at the Wisconsin State Fair, Summerfest, Bastille Days, Port of Fish Day, the Brady Street Festival, and Music at Mitchell Park. More information about their performances can be found on the Milwaukee Flyers’ Facebook page. The brothers welcome any kids interested in joining the Milwaukee Flyers: they should come to one of their practices during the fall at the Martin Luther King Community Center, on a Tuesday or Thursday from 4-7 p.m. 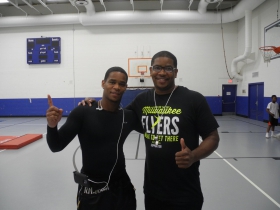 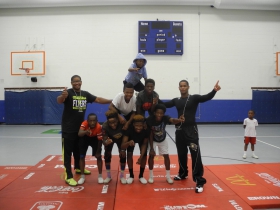 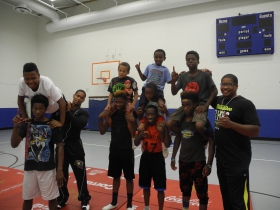 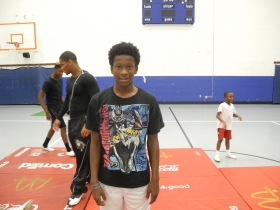 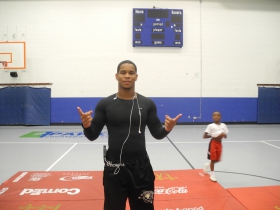 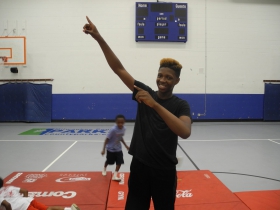