By Brendan O’Brien, Milwaukee Neighborhood News Service - Aug 13th, 2015 10:48 am
Get a daily rundown of the top stories on Urban Milwaukee 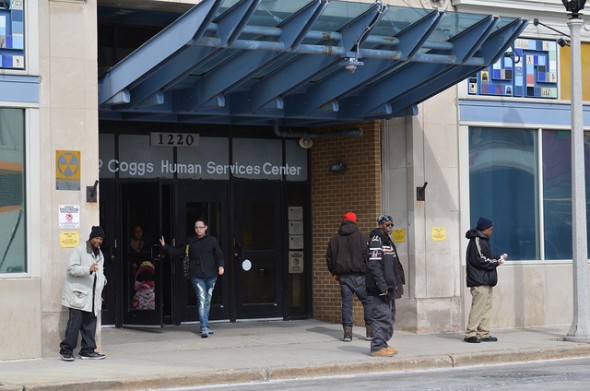 Very little is known about how state officials plan to implement a newly minted law requiring them to drug test some food stamp recipients, despite longstanding support from Republican Gov. Scott Walker. Walker recently launched a legal battle challenging federal regulations that prohibit such a law.

The law requires the Wisconsin Department of Health Services to develop and implement policies to drug test those able-bodied adults without dependents who are required to take part in the employment and training program associated with FoodShare, the state’s food stamp program. Recipients who test positive for drugs are required to participate in substance abuse treatment to remain eligible for the employment and training program and are subject to random drug tests, according to the law.

Before Walker signed the bill into law as part of the state budget last month, officials at the U.S. Department of Agriculture, which oversees the federal food stamp program, told the state that drug testing recipients is illegal. Walker’s administration responded by filing a lawsuit, requesting a federal judge to determine if the state has the right to drug test welfare recipients. The plaintiff, Wisconsin Department of Health Services Secretary Kitty Rhoades, argues in the lawsuit that she faces a legal conundrum – either break state or federal law – a conflict created by Walker when he signed the bill into law. 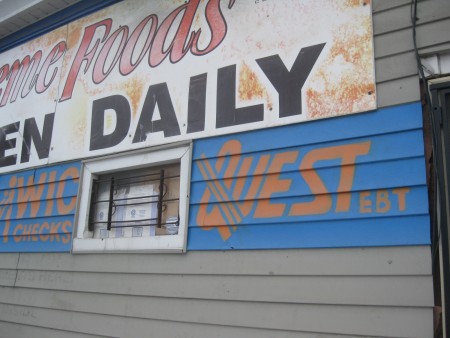 A sign promoting Quest, the state’s food stamp card, is painted on the façade of a Milwaukee corner store. Photo by Brendan O’Brien.

Department of Health Services officials have been unable to provide details on how the agency plans to implement the law, such as what type of drug testing will be conducted, who will perform the tests, who will have access to the test results and what the program is expected to cost.

“The Department of Health Services does not comment on pending litigation,” wrote Claire Yunker, a spokeswoman for the department, in an email.

Several officials at organizations in Milwaukee that help individuals apply for FoodShare benefits said they have no information from the state in regard to the new law.

“We have not heard anything yet,” said a caseworker with the Milwaukee Enrollment Services Center. She did not provide her full name and was not authorized to discuss the issue.

An official with the Social Development Commission in Milwaukee, who asked not to be identified, said that her organization, which helps individuals enroll in entitlement programs, has yet to hear about how the state plans to administer the drug test.

The cost of the federal lawsuit is also unclear. Department of Justice spokeswoman Anne Schwartz said her department will not hire outside lawyers to fight the case and therefore will not be tracking hours and will not know what it costs.

The concept of drug testing welfare recipients in Wisconsin is not new. The governor campaigned on the idea last year and has spoken publicly in favor of drug testing.

“We want people to know the dignity that comes from work. (This program) will encourage personal responsibility and workforce readiness,” he wrote in a budget document describing his line-item vetoes.

Legislation requiring some FoodShare recipients to be drug tested was also introduced in the Republican-led Assembly in April. Legislative documents contained no substantive information on how the law will be implemented and how much drug testing will cost taxpayers. A Legislative Fiscal Bureau report on May 19 noted the lack of details in the proposed measure, including whether all program recipients would be screened, when they would be screened and what role local agencies and counties would have — if any — in administering, enforcing or funding drug testing.

The report also said the state Department of Administration has indicated that some of the program details would be included in a waiver application and through negotiations with federal officials. Wisconsin did not submit a waiver application to the USDA as of Aug. 6, according to federal officials. A waiver is required for a state to change the terms of its food stamp program.

In addition, the non-partisan fiscal bureau detailed some of the legal arguments that could be made if the measure is challenged in court, including the possibility that the law is unconstitutional.

“The Governor’s proposal is suspicion-based, in that it would require a positive screen to administer a drug test, so it is not known whether a court would consider it an unreasonable search,” the report said.

A similar Republican effort in Florida failed both legally and economically. Florida spent more than $45,000 from July to October of 2011 to determine that less than 3 percent of the 4,086 welfare recipients who were tested actually used drugs, according to the New York Times. The state paid $118,140 in reimbursements to recipients who passed drug tests, more than it would have paid out in benefits to the people who failed the test, according to the newspaper. The Florida law has since been struck down as unconstitutional by a federal judge.

“This isn’t a serious policy proposal. This is an attempt merely at partisan politics to help one individual’s ambitions and it’s unfortunate that it comes at the cost of people who need food,” said Michael Bare, a research and program coordinator at the Public Policy Institute, referring to Walker and his presidential campaign.