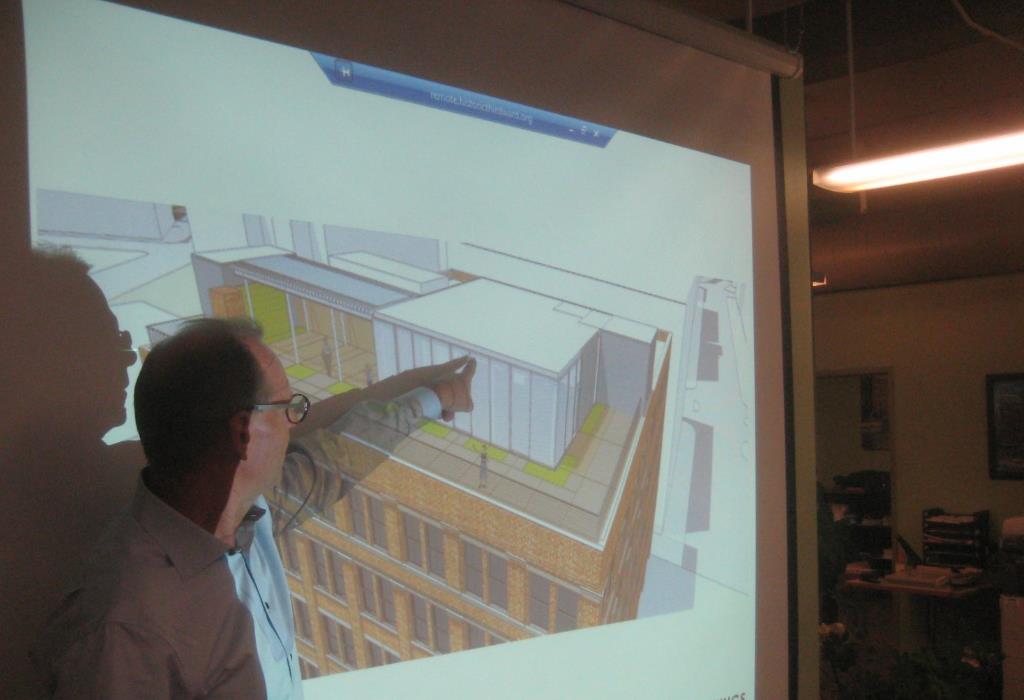 When the architectural firm of Eppstein Uhen bought and renovated an old warehouse at 333 E. Chicago St. as its headquarters in 1999, the firm employed 85 people. Today, the five story timber frame structure in the Historic Third Ward is home to 125 of the firm’s 150 employees and “we are literally out of desks,” says partner Greg Uhen.

Uhen told the Historic Third Ward Architectural Review Board meeting Wednesday that he expects to add about 30 more people to the firm within the next few years, and a sixth floor to the building immediately.

He cited a need for:

Uhen said the only place to go for these amenities would be up, so he proposes yet another rooftop expansion in an area that has seen a number of them recently. The firm is already installing smaller workstations to increase available workspace, he said. 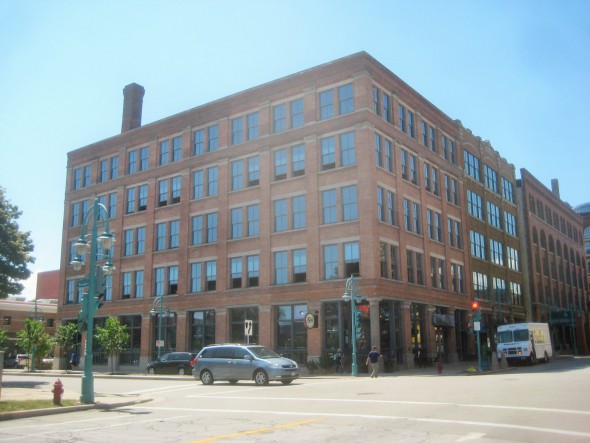 Uhen told the board that he proposes a “simple, elegant structure atop a lovely old historical building.” The new facility would be made of a galvanized steel frame set above the timbers of the original building. Right now the roof is about three-quarters clear, save for a mechanical area that Uhen placed off to a side during the 1999 remodeling, envisioning that some day the roof might be called into service. Architects like to think ahead.

The new improvements would encompass about 2,500 square feet of space, and include some raised planters, a sunshade structure, that needed kitchenette and a small rest room. The floor would be stained concrete, and Ipe wood would be used for the decking and for a wall by the sunshade. The new structure would mimic the bays and other proportions of the existing building, including floor height but would be constructed of modern materials, with a liberal use of glass.

Uhen hopes to use zinc to clad the building, provided the pricing is right. He declined to give a budget for the project, but indicated it would not be cheap. At this point, he has put the building out to bid, and says he is willing to go ahead immediately with construction by Berghammer if the project comes within budget.

An alternative would be to find rental space for the new employees, which would possibly be more expensive than the proposed build-out, and would spread out staff to remote locations, at a time when collaboration is all the rage in architectural design firms.

The members of the board, led by Ald. Bob Bauman, were generally supportive of the proposal, and gave it a preliminary approval with no dissenting votes. Member Greg Patin had some reservations about what all agreed was the single most challenging aspect of the building program, namely a stairwell that would have to be built above an existing one, and would be visible from the street. Uhen’s solution was to mimic the windows below, but Patin suggested the proportions might have to be tweaked somewhat. 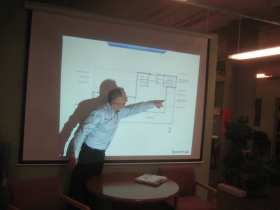 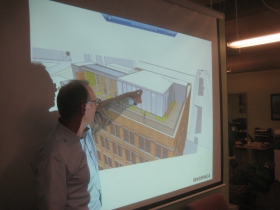 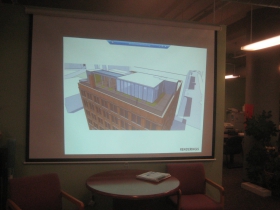 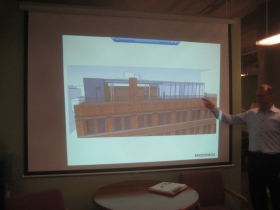 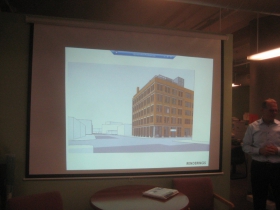 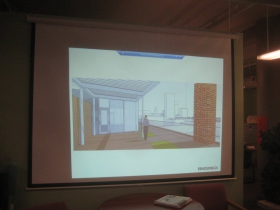 After the Architectural Review Board meeting, Bauman and Historic Third Ward executive director Nancy O’Keefe met with representatives of Milwaukee World Festival and Department and Commissioner of Public Works Ghassan Korban to discuss neighborhood complaints about traffic during the 11-day run of Summerfest this year.

“The Third Ward becomes unlivable for 11 days,” he said. “We need a plan to substantially reduce auto traffic during [Summerfest],” he said. “People can’t get to their homes.”

Bauman cited the case of a medical professional who lives in a riverfront loft. She arrives home from work around 11 p.m., he said, but during Summerfest was not allowed to her residence. Police had all traffic in the area running one-way out of the ward, she said. Furthermore, the police refused to believe she even lived there, adding to the complications. Traffic at the end of the festival day can be gridlocked as far south as National Avenue, said Bill Wesley, Summerfest head of security.

Some lots are charging as much as $50 for parking, which Bauman said is a good thing. “Let the marketplace discourage driving,” he said. When O’Keefe said the Third Ward charges $15 for Summerfest parking at its lots, Bauman retorted, “that’s not enough.”

“The problem with Summerfest is not the people — it’s the cars,” he said. “Summerfest and the Third Ward can absorb another 100,000 pedestrians. The problem is the 20,000 cars. … I have expressed this frequently to [Milwaukee World Festival CEO Don] Smiley.

“Thirty years ago there was nothing in the Third Ward. Now there are residents, businesses, with big property taxes that they are paying to us,” and that is enough to get a politician’s attention.

Bauman cited a proposed 30-block no-car zone proposed for the visit of Pope Francis to Philadelphia in late September, and suggested Summerfest might consider a similar option, closing traffic to all but residents and service vehicles, as well as likely limiting the ability of people to charge $50 to park cars on their surface lots.

Whatever the decision, Bauman said something must be done. “We need a “Plan B” at some point to significantly reduce the number of cars coming down” for the festival, he said.

Shaw, a Marquette-trained attorney in private practice, previously ran for mayor. Shaw, who calls himself a “zealous advocate for our community,” says “we need a new kind of leadership,” in the 4th District, which is represented by Ald. Bob Bauman, who is expected to run for re-election. Shaw says he has a strategy for reducing murder in Milwaukee, including getting illegal guns off the street through a “Gun Bounty Program,” which he says is not a “gun buyback program.” The bounty would pay “substantial rewards for information leading to the arrest and confiscation of illegal firearms.” The bounty could also include reduced sentencing in plea bargains agreements for offenders facing criminal charges, he said. His plans also include improving economic opportunity, improving the relationship between law enforcement and the community, and crime prevention.

Bauman, for his part is unfazed. He noted that Shaw has drawn limited financial support for his campaign. Outside of Shaw’s own contribution to his campaign, the remainer of his support came from entities interested in operating a strip club downtown, Bauman said. Rusty’s site for the fundraising was appropriate, since Bauman opposed the use of it as a strip club some years ago.