By Allison Dikanovic, Milwaukee Neighborhood News Service - Aug 2nd, 2015 10:40 am
Get a daily rundown of the top stories on Urban Milwaukee 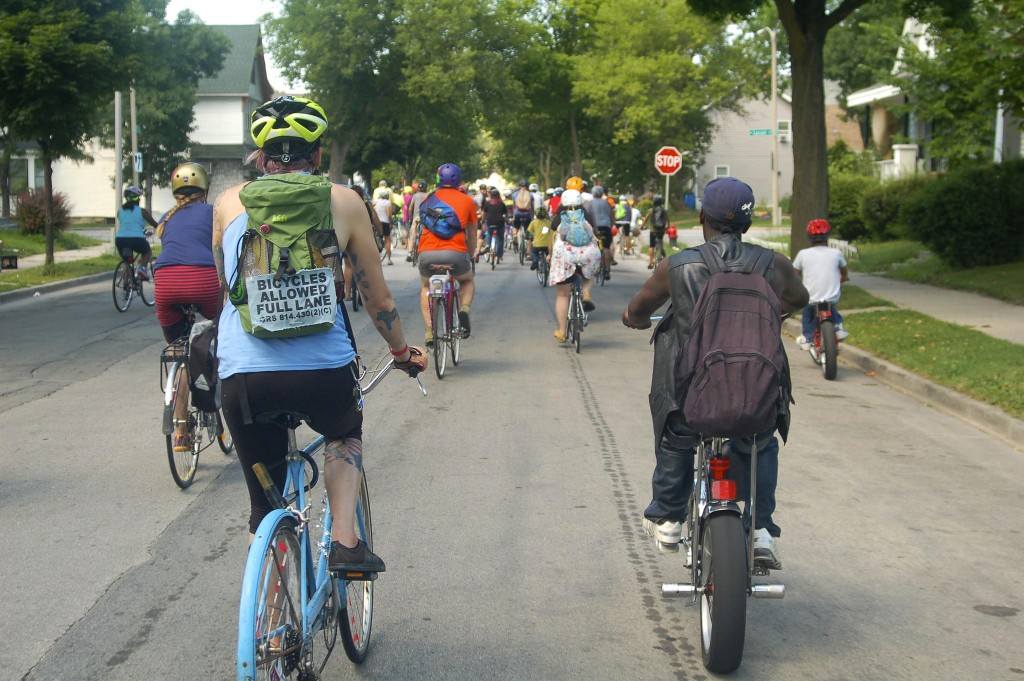 Residents of Riverwest and Harambee shared the streets and admired sites in both neighborhoods during the 53212 Unity Ride. Photo by Allison Dikanovic.

The rhythms of familiar disco tunes pulsated, smiles flashed and colorful streamers flew down the streets of Harambee, signaling the kickoff of the first 53212 Unity Ride. While the idea of the slow-paced, family-friendly bike ride was simple — to get people outside and exercising — it had ambitious intentions. Timed in conjunction with the annual Riverwest 24 Hour Bike Race, the more accessible 53212 Unity Ride set out to bridge the gap between two historically disconnected neighborhoods that share the same ZIP code, Harambee and Riverwest.

The two neighborhoods are geographically similar, but there is a noticeable racial divide that runs along Holton Street. Harambee’s residents are primarily African-American while Riverwest’s are primarily white.

“I wanted to create a way to bring Harambee and Riverwest together in recognition that we’re one community, it’s all 53212, but so often we do things separately. There’s racial tension and stereotypes that happen about both neighborhoods, so we need to start getting together and doing events that make us act as one community,” said Shea Schachameyer of Connect 53212, the event’s organizer. 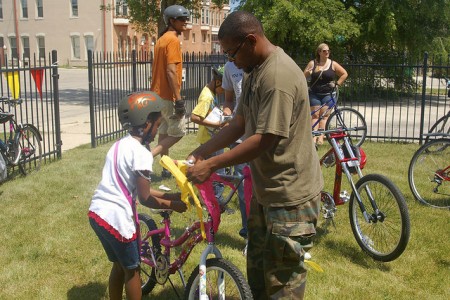 More than 100 participants including families, adults and children of all ages, shapes and sizes gathered outside DreamBikes to decorate their bicycles before the ride began. Christ Washington and his daughter Shalisa draped pink and yellow streamers over her handlebars. Washington said it was the first organized bike ride they had participated in.

“It says ‘unity’ in the name, so I wanted to be a part of it,” Washington added. “Right now, people act like they don’t know how to get along in some communities. I think bicycles are a good way to bring people together.”

The ride took participants through both neighborhoods, highlighting landmarks such as parks, gardens, murals and bike paths. One of the stops acknowledged a new extension to the Beerline Trail that connects the northern part of Harambee to the rest of the path that continues through Riverwest. “That in itself is a great project that is linking these two neighborhoods because before it stopped at Holton Street,” said Schachameyer.

The riders also took a break at Clinton Rose Park in Harambee to catch their breath and hang out in the shade. It was a chance for strangers to chat with their neighbors.

“It’s a beautiful day outside to just build relationships,” said Adrian Spencer, a staff member of Safe and Sound. She described the alleged tension between Harambee and Riverwest as a “perception” that could be broken if people in both communities got to know each other and appreciate what each neighborhood has to offer.

Paul Szedeiewski, a resident of Riverwest since 1981, agreed. He described the 53212 Unity Ride as a “blending of peoples who have an interest in community” and said he hoped “more personal recognition and contact, just people knowing each other and being open,” would be the result of the ride and similar events going forward.

Schachameyer said she was thrilled with the positive response from community members and plans to organize another ride next year.

“We need to keep doing work that celebrates how unique each neighborhood is… The goal isn’t just to meld the two neighborhoods together but to really recognize there are these separate neighborhoods within one community, and together, we’ve got all these amazing assets,” she said.

Desiree Roberts, a staff member at Connect 53212, found beauty in the simplicity of the ride. “Personally, I think it’s a great opportunity for people to simply enjoy being together doing something fun,” she said.