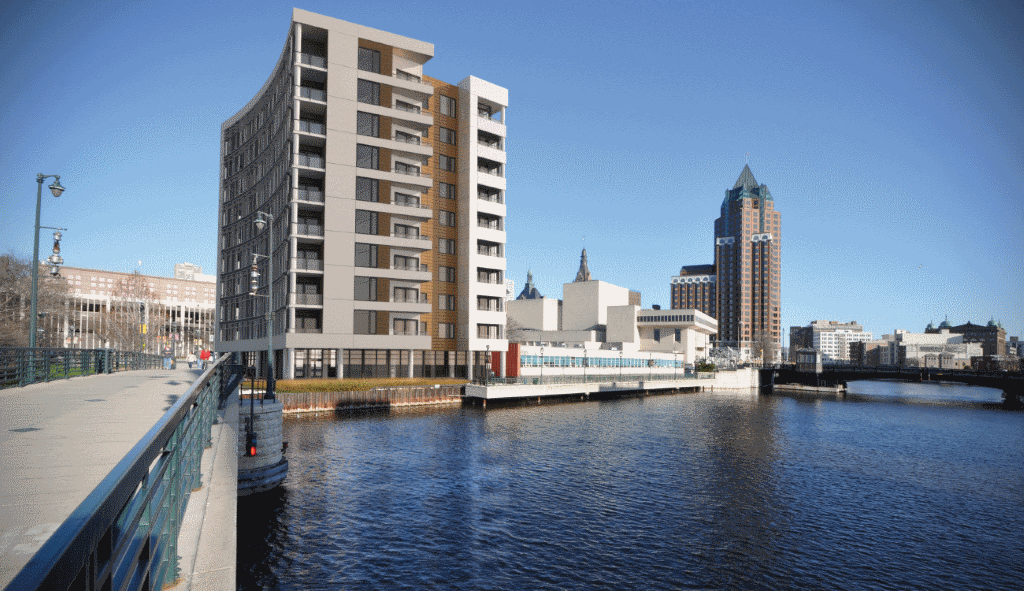 Late last week news broke that the City of Milwaukee had selected Klein Development Inc.’s proposal to build a $15 million, 10-story apartment building at 1027 N. Edison St., next to the Highland Ave. pedestrian bridge. It was selected from four proposals the city had received in response to a request for proposals (RFP) it issued to develop a portion of the 19,985-square-foot, city-owned lot. The RFP required a building of six to ten stories with all structured parking to be located below ground.

This wasn’t the first RFP issued for this site by the city. Back in late 2007 Russ Davis responded to a city RFP for this location with a proposal to build an eight-story, environmentally friendly, mixed-use building, called Edison Green, but that project never moved forward.

In a Business Journal story about the current proposal Sean Ryan laid out the details of the Klein’s proposal. “Its proposal includes 72 high-end apartments and 4,500 square feet of ground floor space for a restaurant,” wrote Ryan.

He noted the ground-floor restaurant is to be a “higher-end brew pub” with patio seating near the Riverwalk, and that the proposal isn’t that far from where the Milwaukee Bucks plan to build their new arena. The apartments would rent for about $1,600 to $1,800 a month and the plans called for 20 two-bedroom apartments, 45 one-bedroom apartments and a number of studios.

Klein would purchase the lot from the city for $840,000, which was the asking price the city was looking for, and if Klein could obtain all the needed approvals it would start construction in spring 2016 and finish the building in spring 2017.

Tom Daykin had a story for the Milwaukee Journal Sentinel on the project as well.

But something was missing from both stories: How much parking will this building have?

That’s how you can build a 10-story, 72-unit apartment building for $15 million. At an average cost of $20,000 per above ground parking spot (if allowed by the RFP), with one parking spot per bedroom (a number that is often cited as the bare minimum), the building would have incurred an additional cost of $1.84 million to build, and undoubtedly prominently feature, a garish parking plinth with multiple stories dedicated just to parking, and thereby eliminating the ground-floor, “higher-end brew pub.” And if they had attempted to build all this parking below ground, it could have easily added $3.68 million, if not more to the cost of the project.

With no parking the average cost per unit will be $208,333 (not taking into account the restaurant space), but with above ground parking that would have risen to $233,888 a unit. With underground parking the average per-unit cost would be at least $259,444, which in turn would push the apartment rental rates higher than the $1,600 to $1,800 a month. And to accommodate parking, the project would have likely eliminated the brewpub space, while adding garage doors, ramps, and curb cuts. Not unlike the neighboring, yet misplaced, town homes located along N. Edison St.

Project architect Jason Korb, Principal Architect at Korb + Associates Architects, pointed out to me that the Marcus Center for the Performing Arts’ parking garage is located just across the street from this project, which is intended as a “walk to work building.”

To build a new apartment building without parking is generally reserved for cities with great walkability and fixed-rail transit service such as Portland, Seattle, and Boston. In fact, according to a story by Angie Schmitt for Streetsblog, in 2012 some 40 new apartment buildings opened in Portland and about half contained no parking.

Might this be a start of a new, urban trend in Milwaukee? Here’s hoping. 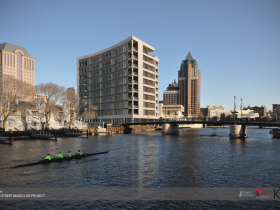 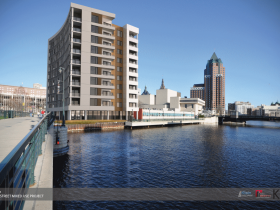 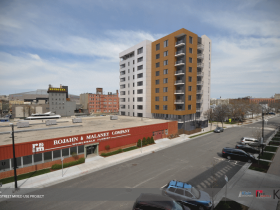 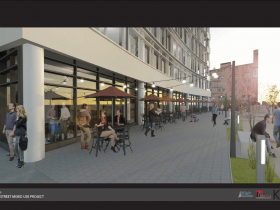 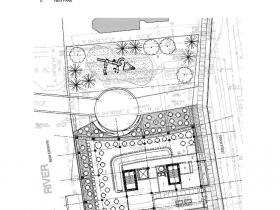 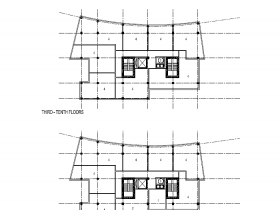 Colleague Jeramey Jannene first broke the news that Mandel Group, Inc. was working on plans to build a 240-unit, 20+ story high-end apartment tower on lake bluff property it owns at N. Prospect and E. Ogden avenues back in August 2013. And in May of this year, Michael Horne reported that Barry Mandel, CEO of Mandel Group, indicated the company intended to break ground on multiple projects within the City of Milwaukee this year. Indications are that this high-rise could be one of them. The location of this high-rise sits at the end of the The Milwaukee Streetcar’s Phase I route.

Here’s what Mandel Group’s Chief Operating Officer Robert Monnat had to say about the streetcar project in a recent Milwaukee Streetcar newsletter:

“We think our future residents will love the opportunity to board the streetcar at their front door and easily travel throughout the downtown for shopping, work, restaurants, theater, attractions and as an easy link to the Intermodal station,” said Monnat. “We’re seeing a gradual but consistent reduction in the number of cars our downtown residents own, which can be attributed to their desire to use alternate modes of transportation. Having the downtown streetcar operational will enhance this trend and simply make it more fun to get around downtown Milwaukee to everyday destinations.”

And in case you missed it, we featured the Walker’s Landing apartment project in last week’s Friday Photos.

29 thoughts on “Plats and Parcels: Trend-Setting High-Rise Offers No Parking”