Questions For the No BS! Brass Band

Just what Cathedral Square needs: a group that sounds like Led Zeppelin played by a brass band 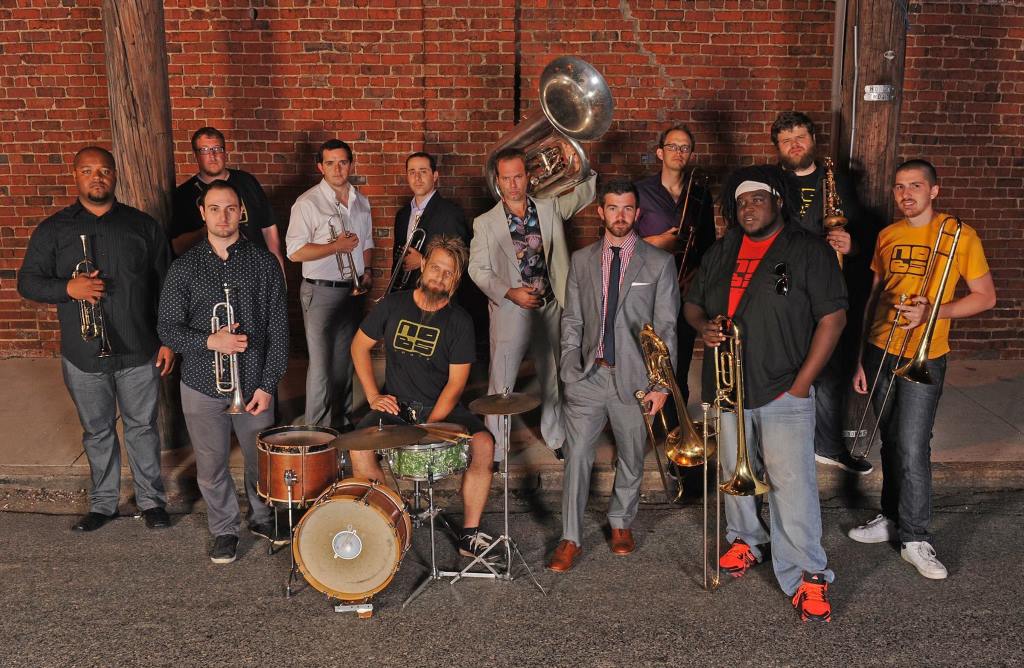 To judge by its name the No BS! Brass Band doesn’t mess around. Its music blends funk, jazz, klezmer, calypso, and Led Zeppelin and the band describes itself as a combination of James Brown, John Coltrane, Michael Jackson, and Zeppelin. The group got its start in early 2006 in Richmond, Virginia with founders Reggie Pace on trombone and Lance Koehler on drums and its 11 members, all conservatory-trained, sometimes refer to their music as the “Richmond sound.” Or as its website boasts, the band was “trained in the conservatory and hardened in the garage.” The ensemble has performed at the Kennedy Center, Lincoln Center, the Festival of New Trumpet Music, and on National Public Radio’s Tiny Desk Concert.

Pace and Koehler recruited a brass-heavy cast of bandmates, including Bryan Hooten on trombone, John Hulley on trombone, Reggie Chapman on bass bone, Dillard Watt on bass trombone, Sam Koff on trumpet, Marcus Tenney on trumpet, Taylor Barnett on trumpet, Rob Quallich on trumpet, David Hood on saxophone, and Stefan Demetriadis on tuba. The sound that resulted was described by Spin Magazine as “a hot, irrepressible blast of brass and canyon-like grooves.”

The group performs at Jazz in the Park on Thursday, July 16th at 6:00pm at Cathedral Square Park. Pace responded to our questions via email.

We all met in the vibrant Richmond music community.

We were very excited when we were asked to come play. We love Milwaukee!

How do you try to connect to the audience?

I think there are a lot of fantastic new bands in all genres. I encourage everyone to go out and see as many local shows as possible. There’s tons of great music out there, probably right in your backyard.

We all started in various public school music programs when were 10. Please please support the arts in public schools. This band wouldn’t exist if not for public school arts programs.

What is your favorite thing to see in the audience while you’re performing?

People dancing and having a good time and just vibing with the universe.

What are some of your most memorable experiences performing?

We played recently with the Richmond Symphony Orchestra playing our music. We can’t wait to play with more symphony orchestras.

Travel the world and spread the love and gospel of RVA (Richmond, VA). And if we ever got the call for the Super Bowl halftime or the Royal Rumble, we’d totally do that.

Eaux Claires festival [in Eau Claire, WI]. You can keep up to date on our schedule at nobsbrass.com

All the new material that will be on our new record out in October —  keep your eyes out for it!

Just have to roll with the punches and keep going.

Milwaukee is a great place with an awesome musical history with people like Les Paul and we all know plenty of stuff from Hal Leonard [the sheet music publisher based here]. I loved playing the Pabst Theater, which in my opinion is one of the greatest musical venues in America.