Walker Is Radical Even Among Republicans 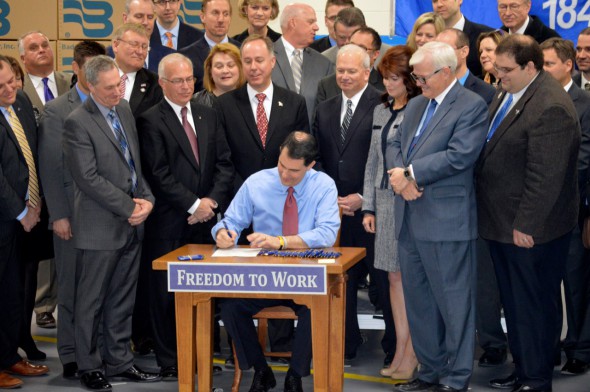 Gov. Scott Walker is not even in the mainstream among Republicans, let alone the people of the United States.

Under Gov. Walker, Wisconsin has become a petri dish for extreme conservative policies. Under his watch, the state has seen unthinkably extreme education cuts, seismic erosion of labor rights and dangerous corrosion of Wisconsin’s tradition of clean, open and transparent government.

As Gov. Walker positions himself as the most conservative Republican in the presidential primary field, he is leaving a wake of destruction in Wisconsin.

Wisconsin voters and even legislative Republicans are growing tired of Gov. Walker’s divisive policies. The latest Marquette poll found Walker’s approval rating has plummeted to 41%. Last week, a dozen Republicans and every Democrat voted against his budget because it was too extreme.

Gov. Walker has shown he will say anything to position himself in the mainstream during election season but then governs as an extremist. Here are just a few examples of Gov. Walker misleading voters:

•In 2009, during his first campaign for governor, Walker pledged to negotiate with state labor unions and then in his words “dropped the bomb” as governor by dismantling collective bargaining.

•In September 2014, Gov. Walker promised that “right-to-work” legislation would not come to his desk in this term of the legislature. Then three months into that term, he signed that bill into law — ramming it through the legislature in a matter of days.

•In a campaign ad in October 2014, Gov. Walker looked into the camera and spoke about leaving the final decision on abortion to a woman and her doctor. He then demanded that Republican legislative leaders deliver an extreme 20-week abortion bill to his desk that included no exceptions for rape or incest — which is what they did this past week.