The Harp, a Unique Waterfront Bar

The riverside has lots of restaurants and even breweries, but the venerable, Irish-themed Harp is the only true tavern along the water. 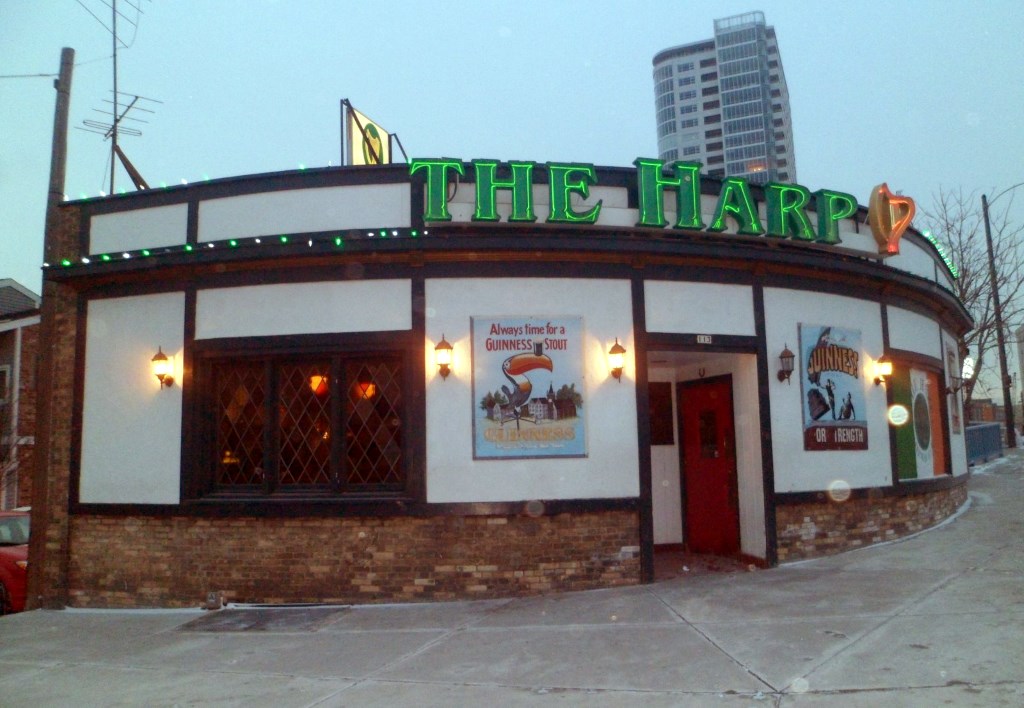 There are many places to drink along the Milwaukee River, including numerous restaurants and even actual breweries– but there is only one that you could classify as as a regular Milwaukee tavern. That distinction belongs to The Harp Irish Pub, located cheek-by-jowl with the southeastern approach of the Juneau St. Bridge, which also gives a unique status.

The operator claims there has been a tavern at this location since the 1860’s. If so, the building was over a century old when Josephine R. Dolan [1905-1982] moved her Harp tavern to this location at 113 E. Juneau Ave. in 1965 after 20 years at 933 N. Broadway (now part of the MGIC campus). The relocation was accompanied by a wake at the old place followed by a full Irish parade at midnight that included bagpipers and 200 customers. That year Mrs. Dolan also added plantings, lighting, seating, a fountain and access to the river side of the building, an apparent first for the city. Her efforts won her a front page editorial in the Milwaukee Journal under the headline, “Mrs. Dolan Does Her Bit to Improve the Riverfront.”

Ten years later, in 1975, Mrs. Dolan was a member of the Mayor’s Beautification Committee and the Bicentennial Commission, and a testimonial dinner held in her honor drew 500 people to the Marc Plaza [today the Downtown Hilton] hotel. The Harp, at the time, was said to be a popular gathering spot for the City Hall crowd, and Mrs. Dolan’s civic appointments would tend to support that argument.

Today the Harp continues as an Irish-style Pub, and is one of the Gaelic-themed establishments run by R. C. Schmidt, Jr., who also operates the Trinity Three Irish Pubs immediately across N. Edison St. Schmidt also operates the Black Rose Irish Pub, the Mexican-themed Vagabond, the Italian Louise’s Trattoria, and the Water Street Brewery, among other holdings.

The building has a harp-like shape, with its northwestern corner cut out in an arc. Its south wall is 70 feet long, and the tavern is about 38 feet wide. The much expanded decks outside add considerable space and capacity in season. Entrance to the deck is via the tavern, or by watercraft. [“Bring your boat. Park it at our new dock!” the website exclaims.] Patrons are discouraged from entering the deck by jumping the railing of the bridge, but this has happened on occasion.

The more conventional approach to the tavern is via the front door, sunken into the rounded-out portion of the facade, and flanked by wood and plaster walls over a course of newer brick. A stained and leaded glass window overlooks N. Edison St., nee the notorious River Street, where the Harp’s early neighbors (and perhaps the Harp building itself) harbored, in addition to politicians, such other discreditable individuals as prostitutes  and gamblers.

Once inside the Harp, it looks like a tavern of the darker sort, as heavily wooded as a Douglas County forest. The ceiling is wood-on-wood, there is a nice wooden back bar, as well as the bar itself, which is accompanied by a genuine brass foot rail. There is a literal harp on the bar, and six coolers beneath, with glass doors so you can check out the available bottled beers. The wooden tap handle stand is engraved “THE HARP,” exhibiting pride in place, and a nice sensitivity for custom detailing. 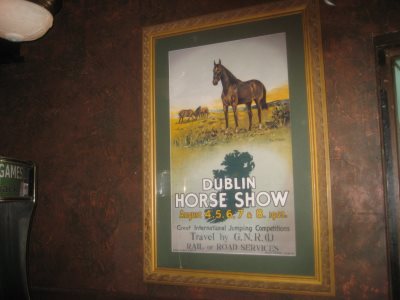 The decoration is limited to a handful of prints, mostly of the historic type and nothing to write home about. (For that, go to practically any other of Schmidt’s memorabilia-packed bars.) One poster asks us to go to Ireland for the holidays, and another promotes train travel to the Dublin Horse Show, held from August 4th – 8th, 1953. Stone is used as a wainscoting, and some of the stones have popped off of a glass-fronted gas fireplace that is the first thing to greet customers as they walk in the door. It looks like that appliance has not been fired up in some time. There are six pendant acorn hanging lamps above the bar, giving an old-timey glow to the room. Here, too, you will find the bathrooms for the place, located on the street side, somewhat curiously, and hardly on the same remodeling schedule as the rest of the place, which is updated rather frequently. The bar is seated by seven fixed, backed, unpadded wooden stools, and two tables in the room have backless wooden stools. There are two wide screen televisions in the room, set to sports. The tavern’s mirror, which I usually find to be the most attractive element in any bar, is, regrettably, largely obscured by a Irish flag.

A middle bar has five chairs and two elevated booths with church pew seating along with two tables for standing. A simple kitchen is tucked away around these parts. This area opens into yet another bar, this one a riverfront outdoors number to serve the multi-level terrace and deck. Overall, the deck is the attraction for this place, although the inside can provide a good ambience for a small group of friends. It might not be the easiest place to scope out a quiet little corner for solitary drinking, so keep that in mind if your goal is to sit and cry in your beer.

The old building at what was originally 21-25 Juneau Avenue has been greatly altered over the years, including the loss of its top story, and a good chunk of its first. It does not show up in city records until 1934, when John Gaido took out a permit to operate a tavern and dance hall in the property. The former use of the property during Prohibition, he wrote, was “tavern and dance hall.” Additionally there were five “sleeping rooms” on the second floor, which no longer exists. But in 1940, when the place operated as the Blue Room Tap tavern, Mrs. Paralee Pritchett had a license to operate the upper floor as a rooming house. The inspector took a look around and told Paralee to “provide ventilation for Bath Room.” The Bath Room must have been in pretty rough shape if it smelled any worse than the river right outside did in those days.

During all of this time, and for decades afterward, the property was owned by the Joseph Schlitz Brewing Company. Although after Repeal breweries could not own tavern businesses, there was no prohibition against them owning real estate, and the Uihlein family kept their mitts on a number of saloon properties around town.

They might particularly have wanted to retain ownership of this building, since it was just across the river and a wee bit downstream from their brewery. The Schlitz sign that hung on the building would be a good reminder of that. Also, the Pabst Brewery is in sight of the tavern, and Schlitz might have wanted to keep their flame burning right in front of the competitor’s eyes. Beer is a rough-and-tumble business.

In 1946 Schlitz took out a permit to alter the storefront of the building, although it is unclear what was done. But usually, in those days, with historic buildings, it was the wrong thing. In 1953 William Cole operated it and had a Schlitz sign on the building.

The owners of Schlitz and the tavern building called on their cousins at Uihlein Electric to do some wiring of the place in 1953, when it was vacant, and just before Cole moved in. As part of the changes, the top floor was removed, and the owner was forced to “remove a large portion of the building due to street widening” occasioned by the bridge rebuilding. At that time, the owner was denied a permit to construct a facade of wood timber, but the Board of Standards and Appeals reversed the decision, giving birth to more-or-less what we see today.

Schlitz might have used this bar as a sign laboratory. While the neon tubes in the 1953 Schlitz sign were still fresh, they were hauled down in 1955 and replaced with a fancy “Schlitz on Draught” neon sign. Two years later, William Cole got yet another new Schlitz sign on the building, which was replaced, yet again, in 1962 with another sign reading “Schlitz” and “William Cole’s Taxi Inn.”

Finally, in 1965, Mrs. Dolan, her bagpipers and 200 customers opened the Harp era at this place. She got right down to business, installing a glass sliding patio door, closing some stairs to the basement and relocating the same, erecting 60 linear feet of wood fence and cutting a 4′ x 8′ opening over the existing back bar and installing a new door in a new location in the men’s lavatory.

In 1972, Mrs. Dolan bought the bar for $25,000 from the Schlitz Brewing Company, becoming both owner and operator of the old tavern.

In 1979 the business was bought by Kent Wakefield, who operated it as a restaurant and tavern, retaining the Harp name and identity. In 1988 he installed the prefabricated fireplace, and in 1989 installed a new sliding glass door. The tavern at that time had a capacity of 25, which was upgraded to 50 the next year with the addition of an outward-opening rear door. In 1991, a $120,000 remodeling took place in the bar and on the deck, at which time it was determined that some of the deck was in the public right of way without permission. “The tavern property drains into city property, then the river,” which is a violation, the city wrote. A small portion of the lot was then sold by the city to the tavern. In 1994 Richard McGinn, agent for the Harp, succeeded in increasing the capacity to 120 for the deck and tavern, with a capacity of 86 for the tavern only. Wakefield died in 2000, and his family continued to operate the place until the current operator bought it.

As mentioned, the Harp is the only true tavern located on the river. Two other candidates remain closed — the Tasting Room on E. Kane Place, and about a half mile upstream from that — on the same uninterrupted sidewalk — Judge’s. All other drinking establishments along the river tend to be more identifiable as restaurants. The Harp does about 60 percent of its business in alcohol, with the rest in food. 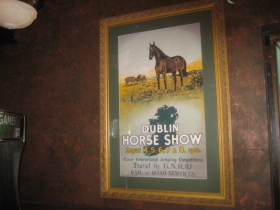 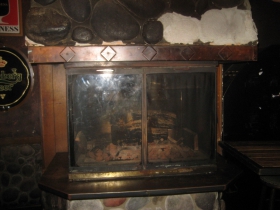 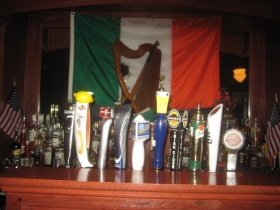 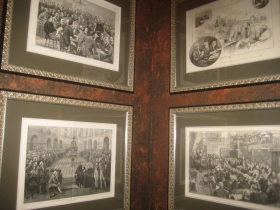 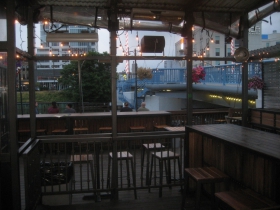 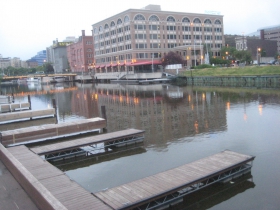 One thought on “Bar Exam: The Harp, a Unique Waterfront Bar”