Why Transportation Costs Are Out of Line

U.S. and Wisconsin use a Soviet model, which results in shortages of funding and long lines of traffic. 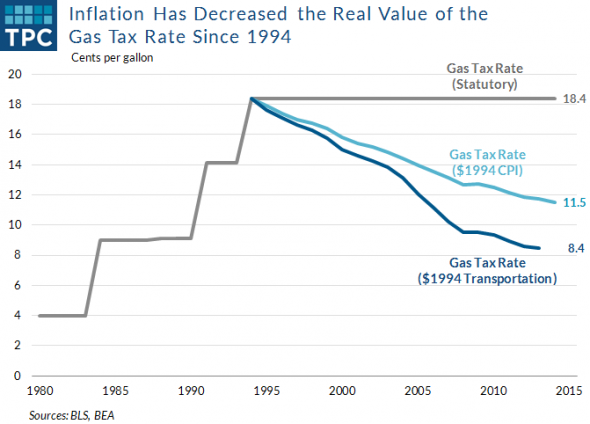 The US is facing a crisis in highway funding. The political will to increase the gas tax has collapsed both at the federal level and in Wisconsin. At the same time, there is a growing recognition that highway users don’t pay the full cost of highways.

The chart to the right, from the Tax Policy Center, plots the history of the federal gasoline tax since 1980. Early in this period the tax was increased three times. However, since 1994 it has stayed flat at 18.4 cents per gallon. With inflation, it has declined to 11.5 cents in 1994 dollars. If the cost of building roads is considered, the decline is even greater. In effect the buying power of the federal gas tax has dropped by more than half. As a result, the federal highway fund is due to run short of its commitments in the near future, yet Congress has been reluctant to increase the tax.

The decline in the purchasing power of the gasoline tax is compounded by two other factors. One is a substantial decline in per capita miles traveled in the last decade, as shown on the next graph, based on Federal Highway Administration figures. 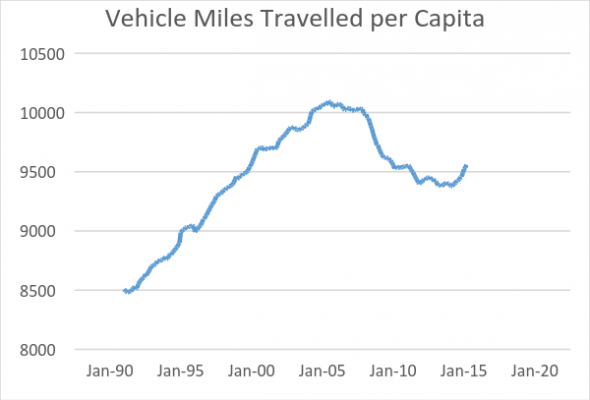 Secondly, cars on the road have become more fuel-efficient. While a good thing from most perspectives, less fuel use means less money for highway construction and maintenance. And with electric vehicles the amount paid drops to zero.

The political reluctance to raise the federal gas tax is reflected in Wisconsin. Despite the highway-centric views of the governor and legislature, they are unable to agree on how to fund already scheduled highway projects. The recommendations from a commission established by Scott Walker’s Department of Transportation were largely rejected by Walker himself. Instead, the governor proposed funding roads through borrowing, which Republican legislators have reduced considerably, while delaying various highway projects to pay for this. No one seemed to favor a hike in the state gas tax, last increased eight years ago.

In Washington, two conservative US legislators introduced a bill, the Transportation Empowerment Act, to lower the federal gas tax from 18.4 cents per gallon to 3.7 cents. (Presumably the acronym “TEA” is not accidental.) This would shift costs of interstate highways to the states. Presumably states could add 14.7 cents to their taxes without increasing the price of gas, but this could run up against the Tea Party opposition to any tax increases. 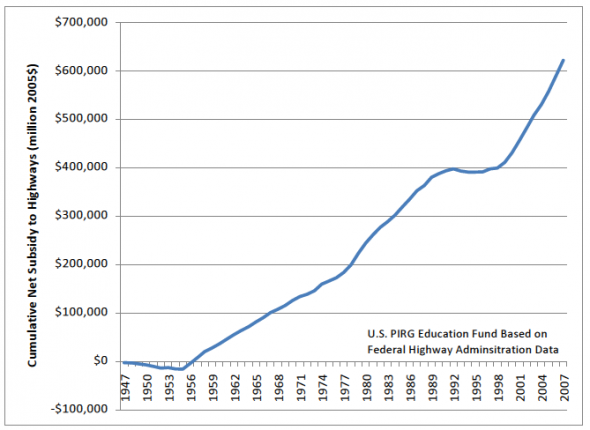 This reluctance to pay for roads comes at a time when the belief that highway users pay for the roads they use is increasingly shown to be a myth. A recent study of road costs by the PIRG Education Fund and the Frontier Group, using data from the Federal Highway Administration, found the subsidy to highways has been steadily mounting, rising 700-fold since the mid-1950s, where there was no subsidy, as the graph above charts.

According to this study, the fraction paid by the gasoline tax has been steadily shrinking. As shown in the next graph, users currently pay about half the costs, with the remainder covered by non-users and borrowing.

One key reason is that the huge network of streets in Milwaukee and other cities are largely paid for through property taxes. Yet the gasoline used by cars and trucks on those streets is taxed largely for the construction of major highways. 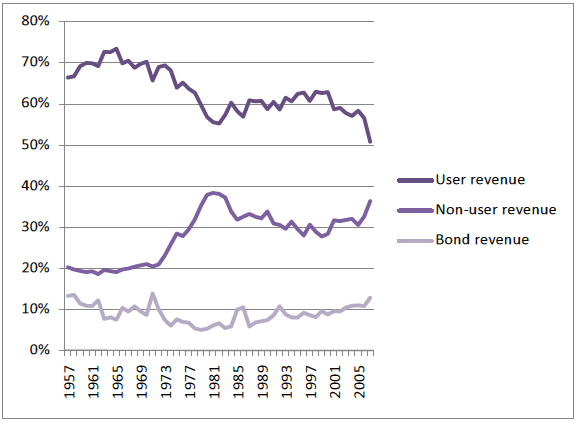 A commentary at CityObservatory argues that the PIRG/Frontier Group analysis actually understates the subsidy. It lists “the hidden subsidies associated with the free public provision of on-street parking, or the costs imposed by nearly universal off-street parking requirements, that drive up the cost of commercial and residential development.” The analysis also does not include the social costs, such as air pollution or increased sprawl. Nor does accounting for roads include the implicit costs of depreciation, as they wear out.

Building freeways has become hugely expensive. The Wisconsin Department of Transportation estimates the cost of upgrading 3.5 miles of I-94 near Miller Park and widening it to four lanes in each direction at $850 million. The DOT arrived at this estimate after rejecting an even more expensive double-decker option.

Transportation policy is further complicated by applying different economic models to different modes. Roads are treated as “public goods.” Their major competitor, rail transportation, is treated as a “private good.”

The standard economic market model is built around private goods, which describes these as goods that are both “excludable” (meaning it must be purchased to be consumed) and “rivalrous” (meaning consumption by one individual prevents others from consuming it; two customers cannot both benefit from the same private good). This leads to the familiar cost-benefit diagram, where the market price of a good ends up at the point where the marginal cost of producing the good equals the marginal benefit to the purchaser.

Freight railroads outside the nation’s northeast corridor are largely treated as private goods and run by private companies. Unlike freeways, they pay property taxes on their rights of way. In the early part of the 20th century, public transportation systems were usually treated as private goods, but were closed or taken over by public authorities when they couldn’t compete with subsidized auto transportation. The change to public goods model may have come because the costs of setting up and staffing toll booths and the fact that traffic on most roads was once well below capacity so that another vehicle incurred little additional cost.

But today, our clogged roads act less and less like public goods. Technology makes charging based on usage much more feasible. Currently Oregon is among several states experimenting with systems in which cars are equipped with a GPS and charged based on mileage. This charge could be variable, so its higher when congestion is high–much like peak pricing for electricity.

Consider the DOT’s proposal for the stretch of I-94 near Miller Park. Amortizing the $850 million construction cost over 20 years and dividing by the average daily vehicle use implies that each vehicle should be charged an extra $1.17 each time they use that section. The charge could also be higher in peak periods and less at other times because the need for an extra lane results from peak usage. It is likely that such a charge would reduce traffic sufficiently to eliminate the justification for increased capacity.

Thus roads behave more and more like private goods, but ones that are heavily subsidized. When the price of a private good is capped, two things happen: demand goes up and supply goes down. As countries like the old Soviet Union or today’s Venezuela discovered, the result is shortages and long lines. In Wisconsin we have deteriorating roads and congestion caused by overuse and a reluctance to pay the resulting costs.

Another justification for subsidizing a private good is that it offers positive externalities—benefits to society as a whole. An example is education. It is easy to exclude students who don’t pay tuition and additional students require more teachers. Yet all modern societies heavily subsidize education in the belief an educated population benefits society as a whole and it is unfair to exclude children who have the bad luck to be born into poor families.

It is hard to identify similar positive externalities when it comes to roads. Most of the externalities are negative—pollution and sprawl by subsidizing car travel. Subsidizing freight travel shifts the supply chain to favor larger and more distant production over smaller and closer operations, countering any desire to buy local. 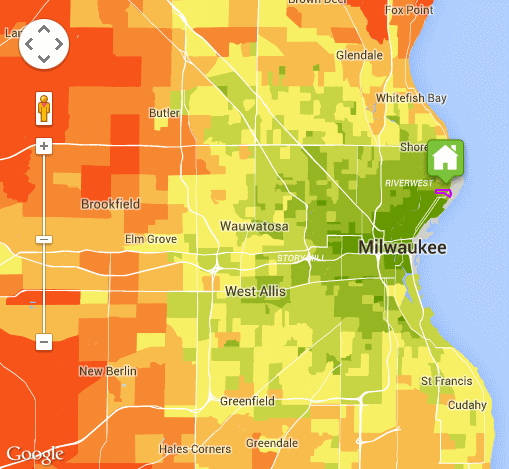 One interpretation of the current resistance to raising the gas tax is that Americans don’t value roads enough to pay their full cost. It appears that road users will make use of roads, especially new ones, only if their cost is subsidized by others.

The more one uses roads, the more valuable is the subsidy. The map on the right shows estimated average driving costs in the Milwaukee area. People living in areas colored green spend less than the average while those in red spend more. Thus the heavy government subsidy of roads represents a cross-subsidy from people in green areas to those living in red areas. Perhaps this helps explain why Milwaukee’s suburbs are dominated by socialists when it comes to highways.

The current resistance to paying even the heavily discounted cost of new roads presents an opportunity to reexamine the assumptions underlying the present transportation economic model, particularly the assumptions by some liberals that all infrastructure is a good thing. It depends on what kind of infrastructure. A place to start is to look at applying a market model to highway transportation. Markets can be a very powerful tool to make sure the costs of an activity are in line with its benefits.

20 thoughts on “Data Wonk: Why Transportation Costs Are Out of Line”