The numbers for Wisconsin are bad, yet Walker is a leading presidential candidate. Why?

Despite lagging economic growth during his term as governor, Scott Walker has rapidly risen to the top rank of contenders for the Republican presidential nomination. That raises a number of questions. 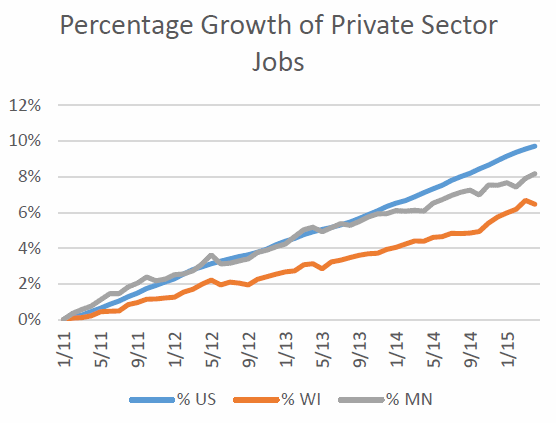 By this time it’s well-known that Wisconsin failed to gain the 250,000 new private sector jobs candidate Walker promised to achieve in his first term as govenor. Instead, Wisconsin gained about 140,000 new jobs, a bit over half the promised number. In percentage growth, Wisconsin lagged both the nation and its even colder neighbor Minnesota, as the graph to the right shows.

One way to reconcile the lack of Wisconsin economic success with Walker’s political success is to argue that governors play a minor role in their states’ economies. In this view, factors outside their control—climate, scenery, the entrepreneurial spirit of the residents, and plain luck—are far more important, at least in the short run. This is a perfectly respectable position, shared by many economists and political scientists. It is not one that Walker would be comfortable making, however. It runs against his whole political stance—from promising the 250,000 new jobs to declaring Wisconsin “open for business” and blaming his predecessor for a lagging economy.

A second theory to explain Walker’s political success in the presidential race despite the Wisconsin jobs record was advanced in a recent column by Christian Schneider. Schneider argued that it would be dangerous for Walker’s challengers for the Republican presidential nomination to make an issue of the Wisconsin economy under his watch:

Perhaps most important, Walker’s challengers won’t attack him on the Wisconsin economy because to do so would be to attack the efficacy of conservative policies in general. Walker is a down-the-line conservative; criticizing his governance would be to criticize exactly the kind of leadership Republican voters want to see in a candidate.

This is a remarkable comment. It confirms that present conservative thinking on the economy has progressed from theory to religion, immune to evidence and criticism.

Another possible reason that Wisconsin’s economic record won’t be an issue in the Republican primary is that many of Walker’s opponents are also vulnerable on their jobs record while governor. Vox published the next graphic for governors running, or considering running, for president. It compares the percentage change in jobs in their states while governor with the national jobs change during the same periods. 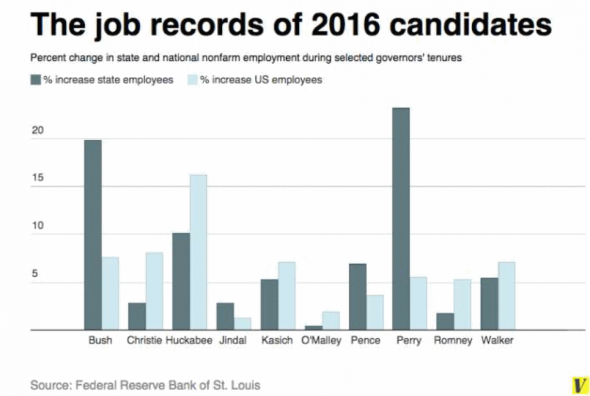 The job records of 2016 candidates

On the surface, it appears that Jeb Bush and Rick Perry are in the best position to call attention to Walker’s record without leaving themselves vulnerable for their own record. However, Bush left office at the beginning of 2007 and the Florida economy immediately tanked. The Florida collapse was triggered by the bursting of a particularly intense housing bubble that had been allowed to grow unchecked during Bush’s term. As a result most of the jobs added during Bush’s term were gone within a few years.

That leaves only Perry, and perhaps Bobbie Jindal and Mike Pence. Perry was given three “Pinocchios” by the Washington Post for exaggerating his record. Still, the Texas record is impressive. It has been attributed to several other factors besides state economic policy, including a strong energy sector, cheap housing, and cheap labor from legal and illegal immigrants. It also largely avoided the housing bubble and subsequent crash; despite its reputation as an “anything-goes” state for business, state law restricted the ability to offer no-money-down mortgages.

Even if Walker’s economic record is given a pass in the primary because his policies represent “down-the-line conservative” thinking, the eventual Democratic candidate will be under no such constraint. How well will these policies stand up to critical examination? 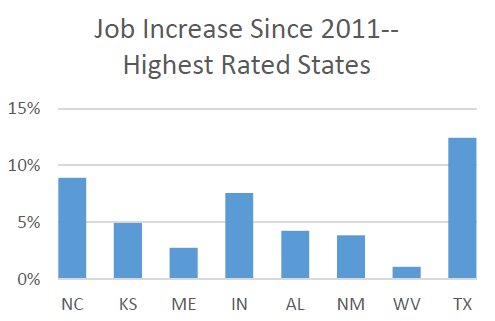 The first step in evaluating a set of policies is to determine which states most faithfully follow them and which most blatantly violate them. Rather than make that determination myself, I will turn it over to the Cato Institute. Cato started as a center for libertarian thinking but has recently evolved into one of the guardians of Republican orthodoxy, under the influence of the Koch brothers. Last year, It issued a report card rating states and their governors based on how well adhered to the dominant conservative economic policies:

Four governors were awarded an “A” on this report card: Pat McCrory of North Carolina, Sam Brownback of Kansas, Paul LePage of Maine, and Mike Pence of Indiana. Eight governors were awarded an “F”: Mark Dayton of Minnesota, John Kitzhaber of Oregon, Jack Markell of Delaware, Jay Inslee of Washington, Pat Quinn of Illinois, Deval Patrick of Massachusetts, John Hickenlooper of Colorado, and Jerry Brown of California. 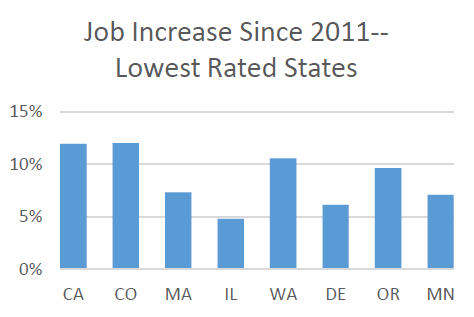 How did these states do during the Walker term as governor in Wisconsin? The next graph shows the percentage increase in jobs since January 2011 for the four states given A’s by Cato plus the four highest scoring states rated B.

Following that is a graph shows the percentage increase in jobs for the eight states given a Fs by Cato.

The eight states rated F by Cato had an average jobs growth of 8.9 percent, a bit better than the average US growth of 8.1 percent. By contrast, the eight top-rated states had 5.7 percent, well below the national average, but still exceeding Wisconsin’s 5.4 percent.

The heart of today’s standard conservative economic policy is reducing taxes, particularly on wealthy people. Thus another approach to judging their effectiveness is identifying the states making the largest tax cuts in the recent or more distant past and measure the change in jobs in the period since with that of the average state. 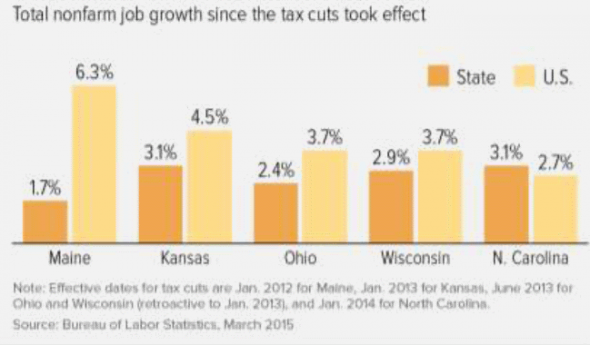 The next graph shows the biggest tax-cutting states in the early 2000s. The bars show the percentage change in the state’s share of US non-farm employment since the tax cuts took effect. The result: Four of six states saw their share of the nation’s employment go down, one state stayed about the same and only Oklahoma saw a significant increase in its share of employment.

While the Center on Budget and Policy Priorities is hardly a disinterested observer, in my experience they play it straight with the numbers and are transparent about how they make the calculations. 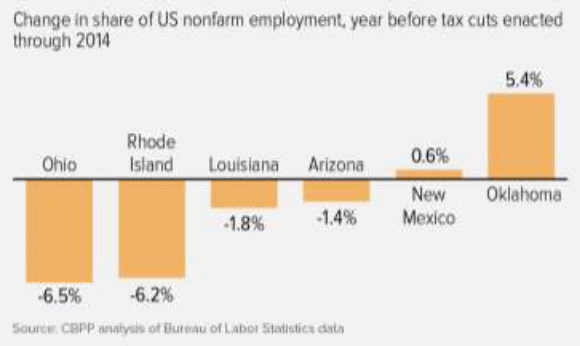 Change in share of US nonfarm employment, year before tax cuts enacted through 2014

While the conservative faith in the job-creating power of tax cuts seems unshakable, it is not supported by the evidence. Neither is the faith that tax cuts will create additional economic activity that will help pay for them. Wisconsin is not the only state that is struggling with its budget and proposing cuts in education and other programs. A recent New York Times article describes the budget struggles in Kansas, Louisiana, and other states that cut taxes. Ironically these struggles come at a time when increased economic activity and employment nationwide should make budgeting easier.

However, one should not conclude that the relatively poor performance of the tax-cutting states shows that tax cutting causes the lower employment gains. States differ in many other ways. It is possible, for instance, that causality runs in the opposite direction—that states with weak economies are more likely to turn to tax cuts in a desperate effort to turn their economies around.

But the reality is that most governors like Walker, who have applied the tax cut approach, have not seen jobs growth as a result. Indeed, Walker’s current popularity in the Republican base that is so influential in the presidential primary depends little on evidence of economic effectiveness. Instead it rests on fealty to currently dominant conservative policies and particularly his success in enacting those policies. Walker isn’t the jobs candidate, he’s the theoretical jobs candidate.