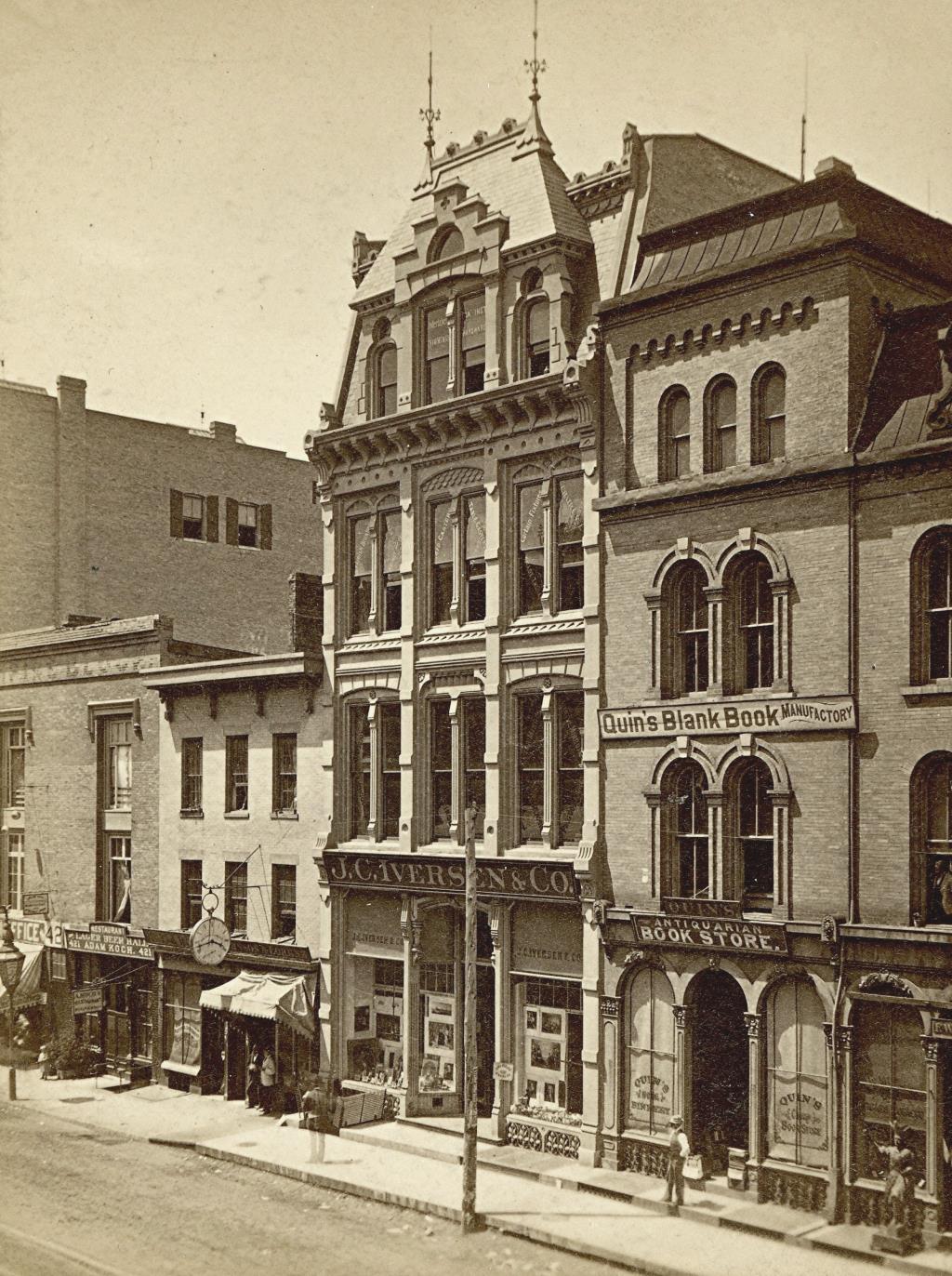 H. H. Bennett already had a thriving business in Kilbourn, WI (now Wisconsin Dells) when he began to do photographs of Milwaukee. Why he did so is not certain, but we do know his first views date from approximately 1879 and he would photograph here until the late 1880s. Bennett would sell stereoviews from his own shop in Kilbourn, but he found an agent to sell his Milwaukee photographs. The agent was John C. Iversen, owner of J.C. Iverson & Co.

Iversen’s store was new at the time and was located on the east side of N. Water St., just south of E. Mason St. This view is of the store and is one of the very earliest Bennett views of Milwaukee. One of the businesses in the photo helps establish the date of the stereo view. The Quin’s antiquarian bookstore and blank book manufactory are of no use as they were located here for some years. However, the saloon of Adam Koch does help as he is listed in Milwaukee city directories only from 1878 to 1880. And J.C. Iversen & Co first appears at this address in 1879, which is likely the year this photograph was taken.

Iversen’s company was a manufacturer of and dealer in picture frames, materials, cabinet hardware and specialities, including trimmings and undertaking. At some point the company facade advertised “Picture Frames, Mouldings, Mirrors.” Iverson was also part of a group of business men who in the 1880s created a company that tried to bring a professional baseball team to the city; he served as its president. (Efforts to bring a team here were successful, and resulting in the old Milwaukee Brewers beginning to play here in 1884.

Eventually Bennett and Iversen would part ways. Around 1887 Bennett’s views were being sold at the West Book & Stationery Co., located a block to the east on Broadway. But by this time Bennett had already produced 200 different Milwaukee views for Iversen and would make nearly 100 more for West.

In the latter half of the 1880s Iversen would produce a magnificent book of 100 photogravures of Milwaukee entitled Milwaukee Illustrated. It is quite a rare book, perhaps because Iversen’s store suffered a fire at this time. Bennett, meanwhile, would provide views for a rival publication produced by Samuel Stein. Was the first book the cause of the breakup of the Bennett/Iversen partnership? Perhaps, but that is mere conjecture.