By Jabril Faraj, Milwaukee Neighborhood News Service - Jun 12th, 2015 11:40 am
Get a daily rundown of the top stories on Urban Milwaukee 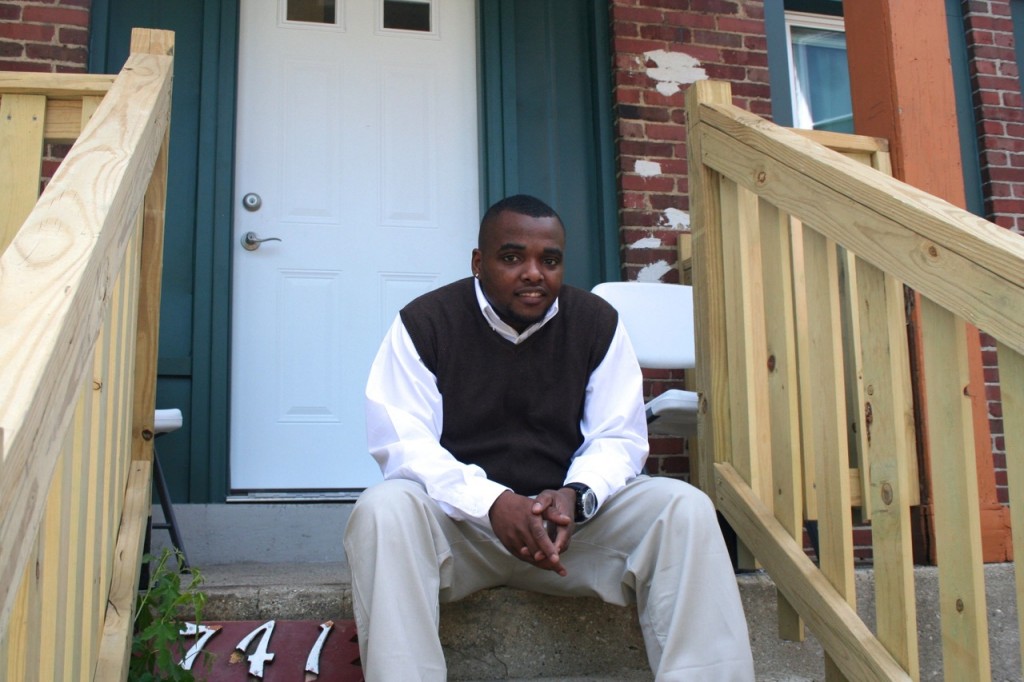 Wilton Johnson, who spent more than four years in foster care as a child, will serve as the Campus Housing Initiative’s peer advisor at 741 S. 23rd St. Photo by Jabril Faraj.

Wilton Johnson walked into his new home for the first time last week. Johnson, 24, lived in foster care from ages 9 to 14 and was homeless, off and on, for a period after that. Until recently, he worked at the airport assisting wheelchair-bound passengers get to their destination.

“We all know that housing for young adults is a huge need,” Johnson told a crowd gathered at a grand opening event for the six-unit house, part of Journey House’s Campus Housing Initiative. The initiative provides housing for “motivated youth” — young people ages 18 to 25 who have aged out of foster care and are going to school or working.

“This initiative reaffirms my faith in my city and my county,” Johnson said, adding that the program will provide “optimism and hope for me and many of my peers.” Milwaukee Mayor Tom Barrett and Milwaukee County Executive Chris Abele also made remarks at the event. 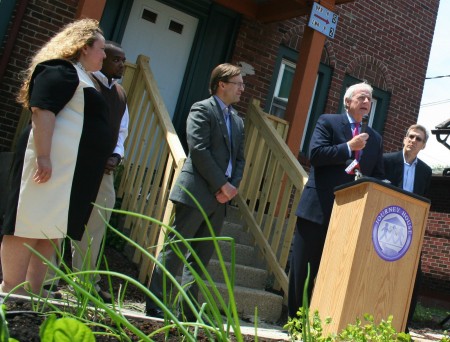 In addition to Johnson, who will serve as a peer advisor for the program, five other youths between the ages of 18 and 22 have been identified by Milwaukee County Wraparound to fill the property at 741 S. 23rd St. Brian McBride of Project O-YEAH, which provides services to young people transitioning out of foster care, said the program identified individuals who “showed motivation, who stayed engaged within their treatment plans … and have struggled with the housing piece.”

The grand opening event marked the beginning of the Journey House program, which was originally slated to launch in March. Journey House CEO Michele Bria said a new water main had to be installed, which set the renovation process back.

“Well, you know, when you’re renovating older properties … you never know what you’re going to find,” she said.

The house was a vacant foreclosed property, which the county bought from the city for $1 to make it available for the housing initiative. Bria said workers “literally [tore] everything out,” ran new electricity and plumbing, put in a new roof and new windows and installed a furnace and hot water heater in each unit.

The rebuild cost about $11,000 more than projected, but could have been more expensive if not for the volunteer help from Northwestern Mutual and Eppstein Uhen Architects. The two companies supplied 40 volunteers who did “everything from putting doorknobs on to painting to drywalling,” Bria said.

Bria praised Clarke Square Neighborhood Initiative Housing Committee Chair John Miceli, who she called a “superhero” for his role in bringing the renovation to completion. Miceli, who has been involved in a couple other rehab projects, said he never doubted the house would get finished, though it was frustrating that the project took longer than expected.

“I never gave up,” Miceli said. “We never had an option of not finishing it, really.”

Abele said the Campus Housing Initiative is proof that “we don’t give up on anybody” and the property itself symbolizes “what could be.”

“When kids age out of the foster care system … we very rarely have an adequate answer,” he said. “They deserve one. We, as a society, deserve one.”

Barrett, who helped change laws when he was a legislator to make it easier for older foster children to stay with their families, said homelessness — especially among youth aging out of foster care — is an important issue. But he acknowledged not every child can stay in his or her foster home after turning 18, though many of them still need “adult supervision and … care.”

Barrett said, with the Campus Housing Initiative, Journey House has “stepped up to fill a void … in our community,” adding that he wouldn’t know what to do if his daughter, who just graduated high school, were on her own.

Bria said the program came out of a Journey House board retreat in 2012 as attendees grappled with “persistent challenges [of] our participants and residents.” It is a double-edged answer to the question of how to address the issues of homeless, motivated youth and “dangerous and unsafe” passageways in the Clarke Square neighborhood.

Miceli said he believes the City of Milwaukee currently owns about 1,000 homes that have been acquired through tax foreclosure. He said those homes could be used to provide a roof for people who don’t have one.

“My dream is that this … can serve as a model to help address the many distressed and foreclosed properties across the city,” he said.

And McBride noted that the Campus Housing Initiative has generated a high amount of interest and there are other youths taking advantage of O-YEAH’s services who would be “wonderful candidates” for this program. He acknowledged the financial challenges, but added, “we could easily double, triple, quadruple this and be comfortable with it.”

Johnson, who will move into the property this month and expects to serve as a peer leader for at least a year, said he’s eager to meet the other individuals he’ll be sharing the home with. He hopes to learn from them, that they will learn from him and that the group can “become six strong individuals.”

“Words can’t even express how thankful I am,” he said. “I’m just overwhelmed.”