The Master and the Pupil

Tory Folliard presents related but quite different work by two Illinois artists. Does the former student outdo his teacher?

The current exhibition (through July 4) at Tory Folliard presents work by a teacher and his one-time pupil, both painters based in Bloomington, Illinois, and while the bolder, bigger works of Harold Gregor may initially dominate over those of his former student Mark Forth, and while Gregor is more prominent in the art world, it was Forth’s work that ultimately had a stronger impact on me. You may feel differently.

Forth’s are Midwestern genre paintings, mostly oil on canvas, all featuring soft, luminescent surreal lighting, emanating from a window (in his interior settings) or a street lamp or lights (in his exterior settings). Some evoke a still, summer night, in a small town (Bloomington perhaps?), with well manicured yards and neat little homes, but not fancy, it could be Bay View. Forth describes his paintings as a “realm of stillness and shadow.” The subjects are achingly human, mired in quotidian details, but often with a Surrealist twist.

The paintings are so soft they almost look like pastels; they have a children’s book feel to them, reminiscent of Chris Van Allsburg illustrations, but the subjects are adult and a sense of mystery pervades. In “Western Western Man” a horse stands inside a home, actually within an empty bed frame, the animal pressing his face against the bedstead.

In “Spring 15,” a woman sits in an old fashioned bath tub. There’s an open window and a watering can and some socks and other laundered items hang from a wash line strung above her head. One senses her fatigue, her shoulders slump, she stares into the water in the bath, but there’s also a sense of well being and accomplishment; the garden has been tended as long as she could work, her back is aching, but her laundry is washed and drying, another task for the day completed. It’s a lovely meditation on the simple pleasures of completion.

Mark Forth: The Owl and the Pussycat.

Another painting is entitled “The Owl and The Pussycat,” calling to mind the nonsense poem by limerick master Edward Lear:

The Owl looked up to the stars above,
And sang to a small guitar,
“O lovely Pussy! O Pussy, my love,
What a beautiful Pussy you are…

We see man standing in a doorway, strumming a guitar and looking at a woman sleeping in a bed, with a statue of an owl and an actual pussy sitting serenely in front of the bed staring at the viewer.

These are all small works, about ten by 11 inches or so, and the viewer has to get in close to see all the details and what’s going on, though the work is evocative even from further away.

Forth, born in 1955, attended Illinois State University in Bloomington (in Central Illinois), where he studied under Gregor. Their paintings could hardly be more different, but they work together in this exhibition to emphasize a difference in vision and style.

Gregor’s current works are landscapes, brilliantly colorful, panoramic and sweeping. Titles such as “Blue Magnified Tangledscape #487” combine elements of more conventional landscape, but often morph into surprising shapes filled with bold colors and patterns, often with a heavy outline which flattens out the shapes and leans toward abstraction. From a distance many of the works have a tapestry or quilt-like effect. “Illinois Flatscape # 106” is a dramatic, birds-eye view of farm fields and roads as if seen from a low flying plane.

“Time Of Reflection” is a rural landscape seen from a distant hilltop and looking towards a distant horizon. The rolling hills, trees and fields suggest a Fauve-like style, again using a brilliant multi-colored palette. Above the horizon line is a tumultuous second landscape — the sky? It’s a dizzying juxtaposition of shape upon shape, colors vibrating, patterns moving us all over the surface. But it all hangs together somehow, forming an exuberant, joyful image.

Gregor’s paintings are riots of shapes and colors. The images are shown from a distance suggesting sweeping monumental views. The works on display are acrylic paintings and watercolors. All are fairly large: the acrylics are 60 inches x 66-80 inches; the watercolors are all about 18 inches x 24 inches.

These works are about as far as you could imagine from photorealism, which is how Gregor got his start in the early 1970’s, with realist landscape depictions. But he later turned to his “Flatscape paintings” which offered an aerial perspective of Midwestern landscapes, and according to his bio, he has since his retirement in 1995 been creating art in four different modes.

These two artists provide an exquisite counterpoint to each other, a small, quiet, intimate world with another that is exuberant and sweepingly tumultuous. Gregor has won National Endowment awards and in 1993 was awarded the Illinois Academy of Fine Arts Lifetime Achievement Award and his work has been displayed in more prestigious venues nationally than that of Forth, who has mostly been exhibited in Midwestern galleries. But Forth is still relatively young in a field where its practitioners can continue to flourish, as Gregor has, late in life. It will be interesting to see how the younger artist’s work develops in the years to come. 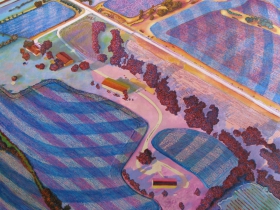 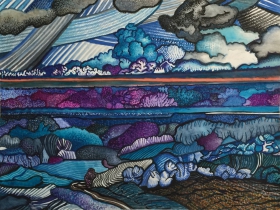 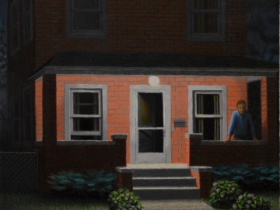 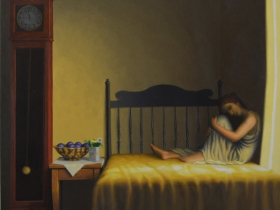 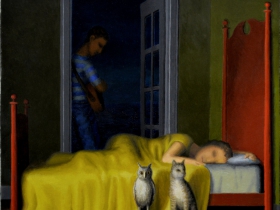 0 thoughts on “Art: The Master and the Pupil”