First established in 1891, and run by the same family for 115 years, the Bay View bar is a classic. 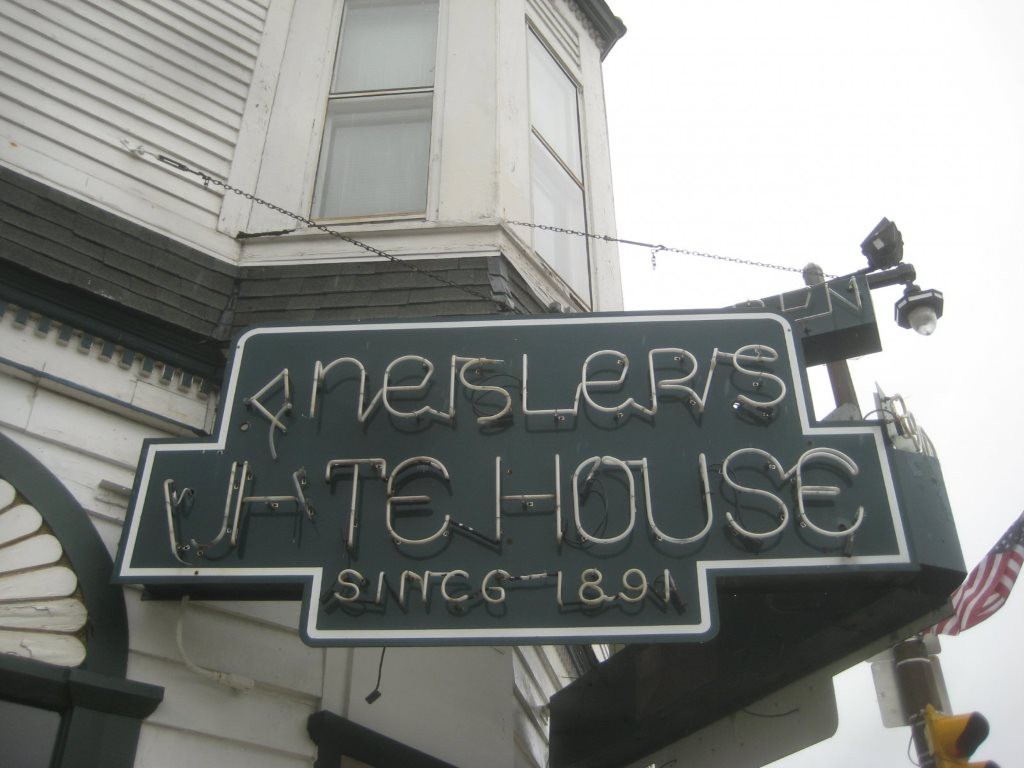 The Joseph Schlitz Brewing Company must have had some excellent real estate scouts in the late 19th century, at a time when the giant brewery would build taverns in developing areas of the city that were still more like the country. In 1891 the brewery built this dual-turreted marvel and leased it to William Kneisler, who had already proved himself by operating two other taverns on the north end of Bay View, at Maple Street and at Fernwood Grove (now the Outpost Co-op). He, his wife and three children moved to the outskirts of town and settled into the distinctive, wedge-shaped tavern located where S. Kinnickinnic Ave. makes one of its periodic dog-leg turns. It was a highly visible location located midway between South Milwaukee and downtown Milwaukee on the major north-south state highway, and provided a good spot to hitch up the horse, strap on a feedbag, and head to the bar for a drink and a free lunch. At the time, there were no buildings to the east to obscure the view of the lake, just four blocks away, but within a few years the location would be filled with the factory workers and locals that would prove to be the tavern’s mainstay, even to this day. It remained in the Kneisler family for 115 years until it was purchased by Sean Raffaelli, now 50, in 2006. 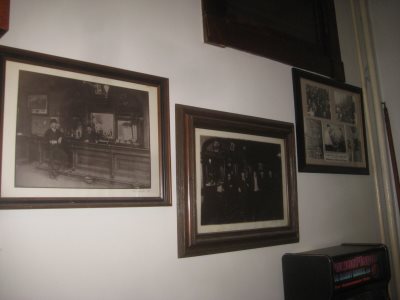 With a fairly legitimate claim to be one of the city’s oldest bars, and an apparently ironclad lock on the longest involvement in a bar by a single family, Kneisler’s has been rebranded as The Historic White House Tavern. It ranks high among Milwaukee drinking establishments for authenticity to its historic roots. The bar, back bar, floor and many other details are original to the building. This can be attested by viewing the many photographs of the place — interior and exterior — that line the walls. Unfortunately, the upper panes of the broad storefront windows have been boarded over, but the place looks pretty much as it always has. The beer steins that are way up on top of the giant mirrored back bar, resting in their little cage, appear to be authentic and rather old. It would be nice to have photos of them somewhere, since you can only see the tops of them from here. The ventilating system is new, and snakes through the upper reaches of the tall room. This place must have been a bear to heat in the old days. The old bar includes an old brass rail, and there are lots of trophies gathering dust as they memorialize past athletic feats of the tavern’s many sponsored teams. A plaster Blatz Beer Maid dances provocatively on her little pedestal high up on the wainscoting, providing a counterpart to the dour visage of William Kneisler as seen in his oval portrait that hangs above. The historic display more than compensates for the loss of tacky beer signs that had dominated the bar during its dive period, which lingered on into this century.

For a small place, it has a lot of blocked doors. A table next to a wine cooler holds a number of plastic beer pitchers.  This setup blocks a door along with a prime window seat from which to view the heavy traffic outside. Never mind, there are plenty of other window seats available.

The bar stools are old-school efficient. They are wooden and circular. They do not swivel, they have no backs and they are not cushioned. This is Historic Bay View, mind you, and not some artsy, upholstered lounge, for heaven’s sake.

Further back, on the way to the rather disappointing toilet rooms, which are tacked onto a shedlike addition to the east, you encounter an old wall-hung telephone with its receiver off the hook. It’s been a long time since this thing heard a dial tone. A room labeled “Office” by a brass plaque apparently lies behind yet another blocked door. The door now serves as the scoreboard for the two dart boards (authentic and electronic) located in this room off of the main hall. The tavern’s wedge shape is a product of Bay View’s screwy street grid, if you could call it that. Kinnickinnic only fronts the south 24 feet of the building, while the broad, 48 foot side that is capped by the dual turrets and two dormers, is actually on S. Ellen St, as is the tavern’s active volleyball court. There is some paved parking in the rear of the building, accessed from Kinnickinnic.

The entrance to the building is right at the junction of KK and Ellen; to the right of the door is a plaque announcing that this is a Historic Bay View Landmark.

A neon sign hanging above the entryway has been broken, and the Kneisler name has been shattered, but “Since 1891” can still be seen in the defunct tubes’ skeleton.

A 1911 photograph predates the neon and the window board-up, but William Kneisler stands proud in front of his “Wine & Beer Hall” that featured a “Tele-Phone Exchange.” (You could get your mail delivered here, too.) 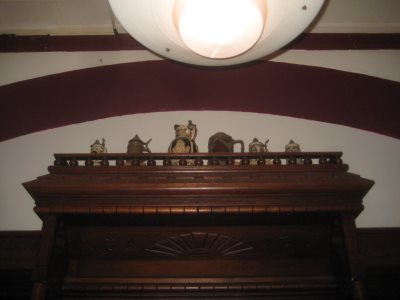 Those hard to spot beer steins. Photo by Michael Horne.

William Kneisler departs the scene in 1919, when he died in the apartment above, and the place was run by his only remaining child, Herb, born in 1890. Brother Alfred died of tuberculosis in the upstairs apartment before graduating from high school and sister Norma died there of an infection from what would today be a simple scrape occasioned by a skating accident.

Herb remained in the apartment and behind the bar, prohibition or no prohibition, until his death in 1973. For the last decade of his service, he did so from a wheel chair, after losing both legs to diabetes, an occupational hazard for bartenders. Interestingly, Herb never smoked or drank.

Kneisler’s was known as the White House because of its color, you would assume, and even at its unpainted worst, it was still reliably white, if tending toward the gray. However, some say the White House was a sly reference to the place’s popularity as a gathering place for south side politicians. These included Ted Wedemeyer, Sr., who would hang around the bar on election nights as the latest results were tallied on chalkboards just as soon as they came in from City Hall over the Tele-Phone Exchange.

In 1936, Wedemeyer became the district alderman. This was three years after repeal, when Kneisler took out a permit for “the erection of a ladies toilet room.”  The Great Experiment had so degraded societal norms that women now insisted upon drinking with their husbands, rather than simply hunting them down in saloons. The ladies and the men’s toilet rooms have since been moderately re-plumbed, (“urinal repair,” 1980) but they certainly rank among the building’s greater disappointments. But who’s to complain when the beer is flowing?

In 1934, Kneisler made the tavern legit, with a Certificate of Occupancy, as so many others did in that year. He admitted that the previous use of the place had been as a tavern, to nobody’s surprise, including the historians of a future time.

On December 14th, 1944 a $3,000 fire burned through the north half of the roof above the family’s living quarters. By March, 1945, the entire roof was repaired. In 1958, Gustave Janzer, Jr. the Deputy Inspector of Buildings sent an “Official Notice” to Mr. Herbert Walter E. Kneisler, regarding a “one-story frame shed” located in the back yard.

“The wood foundation sills are decayed; walls and roof are sagged, out of plumb or level; wood studs are decayed at the bottom; siding is split, warped, decayed and parts are missing.” Kneisler had thirty days to remove the offensive structure, and it disappears from history. 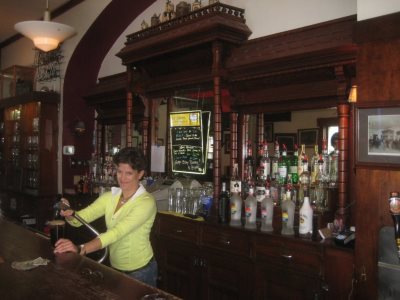 The bar at The Historic White House Tavern. Photo by Michael Horne.

By 1968, the net sales at the bar were $36,608, which must have been plenty for Herb, considering he was not one to drink or smoke away his profits. In 1969 the assessor came by and found its condition to be “fair. In bad need of paint.”

After Herb died at 83 in 1973, the tavern remained in the family, run by Raymond S. Hildebrand and his family including son Scott Hildebrand and daughter Beth Freda. The owners were able to increase the capacity from 25 to 80 in 1992, just after the place celebrated its hundredth anniversary with a festive tented party outdoors.

The volleyball court enters the picture in 1992, and caused a bit of a neighborhood ruckus over its placement. Three locations were suggested, with the northeastern frontage of Ellen Street being the winner. A net fence keeps the volleyballs off the street and out of the neighbors’ yards. Wedged between it and the bathroom addition to the building is a modest outdoor patio featuring what appears to be a genuine City of Milwaukee Harp Lumiere, painted forest green, like the building’s gables and trim.

For longevity and authenticity, The Historic White House is worth a visit. If you can’t wait until the 3 p.m. weekday opening hour, come by on weekends when the place gets going by 11 a.m. It’s a good place to meet the neighbors on the south end of the south side, and is just four blocks from South Shore Park and its myriad delights.