Study shows 86% of those convicted of pot possession are African American.

By Edgar Mendez, Milwaukee Neighborhood News Service - May 31st, 2015 02:37 pm
Get a daily rundown of the top stories on Urban Milwaukee 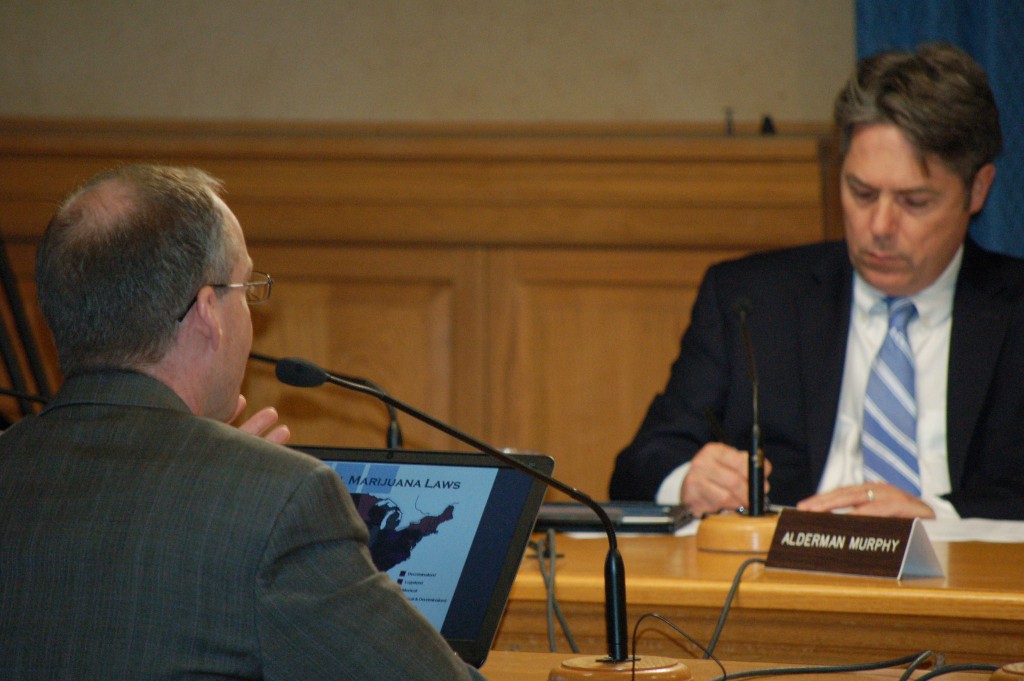 In 1997 Alderman Michael Murphy drafted Milwaukee’s current ordinance making first-time possession of less than 25 grams of marijuana a municipal offense rather than a state charge.

“There was a (racial) disparity back then that was pretty relevant,” he said.

The racial disparity in marijuana convictions remains extraordinarily high, according to a new report by the Public Policy Forum (PPF), which was presented to the Common Council’s Public Safety Committee Thursday. The report found that in 2013 and 2014, 86 percent of those found guilty in Milwaukee County of a second or subsequent marijuana offense were African American. The second state conviction is a felony.

Alderman Joe Davis, Sr. makes a point during a discussion of options to change marijuana laws and policies. Photo by Edgar Mendez.

According to the report, very few Milwaukeeans end up in jail for a first-time marijuana possession offense, but the second and subsequent convictions are referred to the district attorney for state charges and often result in incarceration.

Eighty-six percent of Milwaukee County cases that are prosecuted by the district attorney resulted in a felony conviction. Of the 275 defendants in 2013 and 2014, 274 were sentenced to serve time in jail or state prison. A 2014 NNS report found that marijuana possession convictions are a key contributor to racial disparity in the state’s prison system.

The Common Council convened earlier this month to discuss possible changes to marijuana laws. One option the council is considering, authored by Ald. Nic Kovac, is to lower the punishment for possessing less than 25 grams of marijuana to a municipal offense and a $50 ticket. Currently, marijuana possession tickets are $250 to $500. State Rep. Melissa Sargent recently re-introduced legislation to legalize medicinal and recreational use of marijuana in Wisconsin.

The PPF report also examined other municipalities that have recently changed their laws or policies related to marijuana possession. According to Rob Henken, president of the Public Policy Forum, the state recently passed legislation paving the way for municipalities to begin enacting their own marijuana ordinances. So far, only West Allis has moved to make second and subsequent marijuana offenses municipal offenses punishable by fines.

Another issue in Milwaukee is that there are few options available to the district attorney, according to the report. “There simply aren’t treatment options that exist for marijuana as opposed to other drugs,” Henken said.

The report made no policy change recommendations. However, it did state that “de-prioritization, decriminalization, or full de-penalization could dramatically reduce the number of African Americans who are being arrested on small-scale marijuana possession charges and the number of disadvantaged individuals whose ability to find and retain jobs is being impacted by time spent in jail or the existence of a marijuana-related criminal charge on their record.”

Molly Collins, associate director of the ACLU of Wisconsin, said the report’s findings are consistent with what the ACLU has long been saying about the racial disparity in marijuana arrests, adding, “These criminal convictions are resulting in jail, trouble finding employment and disrupting other aspects of people’s lives.” The ACLU has been working to decriminalize marijuana.

The Common Council will take up Kovac’s proposed marijuana possession ordinance at the June 2 meeting of the council.