The Only Saloon in Piggsville

And the Valley Inn is a dandy, with a nicely-restored 1898 building and all those photos (and stories!) of floods. 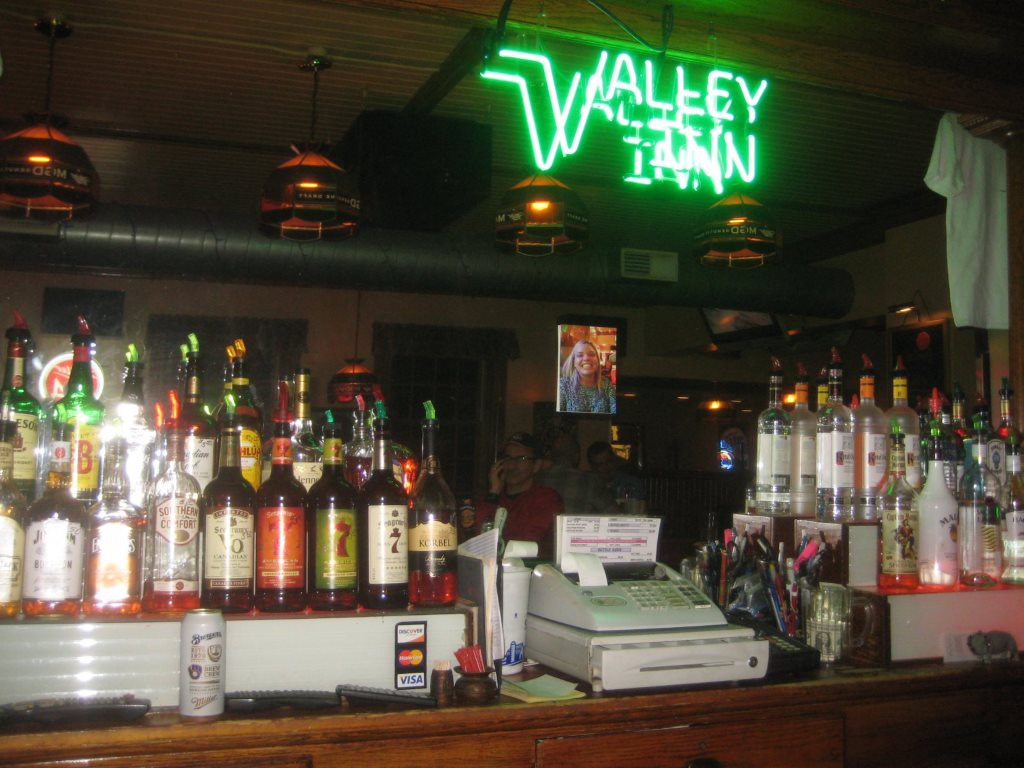 If you travel to a hilly city like Pittsburgh or Birmingham, hidden neighborhoods tucked in remote valleys are commonplace.

But here in the relatively flat land of Milwaukee only one neighborhood has the topographic props. It is known as “Piggsville,” “Pigsville,” “The Valley,” “Valley Park” — take your pick — and calls itself the “smallest distinguishable neighborhood in Milwaukee.”

After the removal of 18 homes in an early 21st century flood control project, the late 19th and early 20th Century neighborhood is even smaller and harder to distinguish than it was when annexed by the City of Milwaukee in the 1920’s. Today, this six-block-by-four-block enclave south of the Wisconsin Avenue Viaduct, wedged between N. 39th St. and the Menomonee River, which flows south here, has only about 100 homes — and just one remaining business.

That lucky survivor is the Valley Inn, located in an 1898 building that has served the community since it opened, and has been in the same family’s hands since the early 1960s.

It’s a relatively easy walk or drive to get to the Valley Inn during low water, although the place has been accessed by boat several times over its history, most recently during the consecutive 100-year floods of 1997 and 1998. Want proof? There are pictures inside of people rowing through the neighborhood. But first take a moment to admire the simple lines of the building. This is a classic Milwaukee storefront/residence structure, and has been admirably updated with accessibility ramps, a sturdy front porch (its first ever, apparently) and a recent addition to house bathrooms and other facilities. Its foundation is limestone (I’m guessing Silurian Dolomite), almost certainly from the nearby Story Quarry about 500 feet west across the river, where Miller Park is today.

The exterior is one of the many improvements to the building, and a good example of what can be done with a modest building in a modest neighborhood. Today, cedar siding with appropriate period details covers the building, replacing the “Insulbrick 5/8″” siding that covered it since in was installed in July, 1947. “Insulbrick” is that ugly asphalt material that is said to resemble brick, and was a popular surfacing material in the immediate post war era. A patch of the Insulbrick can still be seen on the north apex of the building’s gabled roof. The place looked pretty shabby when it covered the entire building.

A Bit of History

Back in 1932 Julius Zunker took out a permit to operate a “Soft Drink Parlor” here. He had operated it as a saloon since 1905, but you know how times and popular tastes changed during Prohibition, so soft drinks it was. Two years later, after Repeal, Zunker took out Tavern Permit A455, listing the previous use of the space as “Tavern.” No soft drinks for you!

In 1946 Pete Bassler installed a basement cooler, a reach-in box and a tap box in the bar as it readied to meet the demand of returning soldiers for Milwaukee beer. Pete also put on the siding, and life continued in the sleepy little Village in the Valley.

Leave it to Leo Milner to shake things up by bathing the neighborhood in flickering neon signs. In November, 1953 Leo installed a Miller High Life sign in an east window, a Schlitz sign in another east window and a Pabst sign in a south window. Two months later a Blatz sign accompanied the Pabst sign on the south window.

Having thus run out of windows to cover, in July, 1954 Leo hung a projecting sign on the corner of the building reading “Leo’s Valley Tap Hamm’s Beer.” The Minnesota beer retained its billing on the corner until it was replaced in 1959 by a sign reading “Gettleman,” giving the building’s displays over entirely to Milwaukee beers. Three painted Gettleman signs were tacked on to the Insulbrick for good measure.

In 1963 Joe Hutterer comes onto the scene (though he may have gotten involved earlier, stories vary) and the place takes on the style and dignity of “Hutterer’s Hut.” On March 5th, 1963, an overheated rubbish burner caught fire, causing $1,500 in “damage to first floor joists and wood beam.” Hutterer repaired the damage. In 1971, a Pabst “P-800” sign replaced the Gettleman sign. The Hutterer family remains in charge, and chances are the person serving you here grew up in the place, and even took a swim in the street during high water as a kid.

In-law Daniel E. Waters bought the property in 1984 for $29,900 at a time when the assessor said “bldg. was in need of repairs and cleaning.” Waters immediately gave it its current name, put $20,000 on a renovated first floor while “retaining ‘Old World Charm’,” the assessor approvingly noted. However, much of the expense was hidden from sight. “It doesn’t look it because most expense was to cure ‘functional obsolescence’,” the assessor said. Waters is a big one for putting money into the less glamorous portions of a tavern, especially those things that do not produce an immediate return, but pay off in the long run. He’s not one to mess around with frozen drink machines, or whatever the latest fad is, but if you want to talk about a giant stainless steel exhaust hood in the busy kitchen, that’s more like it. In 1990, Waters removed the Insulbrick siding and replaced it with cedar in a first stage of the transformation of the building. Back then, there was a woman’s room and men’s room lined up on opposite walls of the tap. These have since been moved to a rear wing added to the place during the nonstop remodelings here. 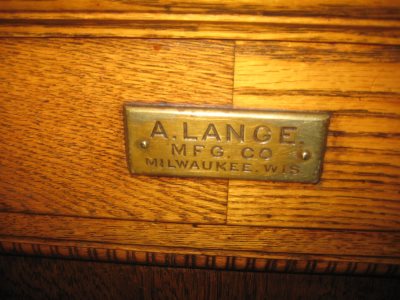 The customer who enters the corner door finds an old bar and back bar to the left. Both are original, dating back to Zunker’s day. A brass plaque on the bar informs the ages that the artifact was manufactured by “A. LANGE MFG. CO. MILWAUKEE, WIS.” (Apparently fine burnished oak bargoods were not the company’s only line of trade. In 1912 A. Lange Co. sold $54 of stakes to the City of Milwaukee.) The bar also has a genuine brass footrail, where you can rest your feet while sitting at one of the eight swiveling, padded, backed stools at the bar. You’ll have no problem seeing the huge grill from this vantage point, and no problem getting a menu. The place serves food from 11 a.m. to 10 p.m.

In fact, it is clear that food is a big part of the business here. The place derives about 60 percent of its revenue from food, and the rear of the saloon is set up nicely with about a dozen tables arrayed in a homey space. There is a wooden ceiling above, wooden wainscoting on the walls, and attractive windows with beer-related curtains. The jukebox was unplugged during a recent visit, but FM commercial radio played, like it or not.

Your illumination comes from MGD light fixtures and lots and lots of Miller signs. This makes a good deal of sense, since Miller’s 10 million barrel brewery and corporate offices are one of the few places you can actually get to from here, and the Valley Inn has long been a favorite luncheon stop for Miller executives.

Other than the expected Miller signs and a few quirky oddities like a mannequin dressed in full Divine Savior Holy Angels regalia at the front bar, and a clock fashioned from a Milwaukee Police Department emblem, the decor here is rather spare. This is just as well, since it helps to show off the excellent bones of the building, and is much easier to keep clean that way.

The visitor should take the time to check out some of the historical photographs and articles in the corridor leading to the bathrooms.

[This poem, found on the Valley Park Civic Association website, sums up life Down Under. Who needs the strife of striving when you already have everything you need?–M.H.]

Life is what you make it,
And you make it what you will.
If you’re happy in this valley,
Don’t try to climb the hill. 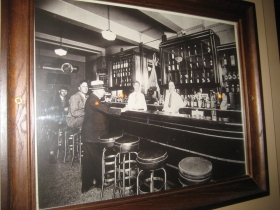 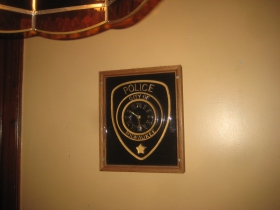 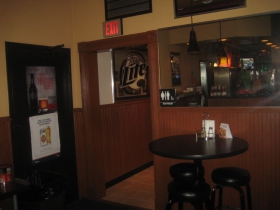 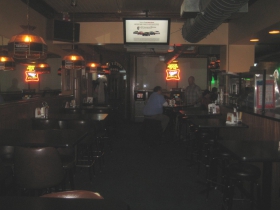 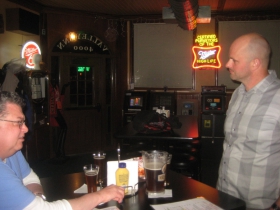 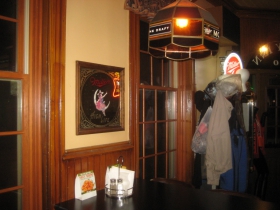 One thought on “Bar Exam: The Only Saloon in Piggsville”