This engraving offers remarkable detail about the quickly growing city just ten years after its incorporation. 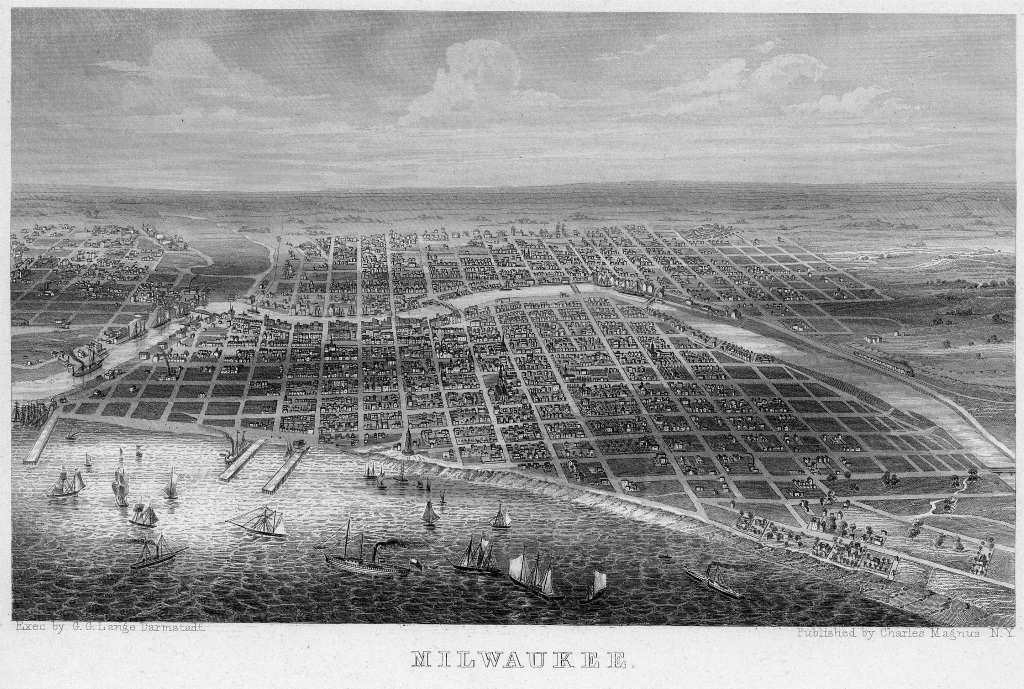 While this is not a photograph of Milwaukee, it is a view of considerable interest as it dates from the 1850s. This engraving is from a lettersheet published by Charles Magnus of New York. Magnus produced similar views of northern U.S. and Canadian cities at that time. Magnus is known for those color lithographs, as well as song sheets, maps and patriotic illustrations for stationery. During the Civil War he also sold many illustrated envelope covers with patriotic themes.  He also published such board games as “New Game of Snake,” “Comical Game of Pigs and Kittens,” and “Running the Blockade,” a Civil War game.

While the Magnus views can be tricky to date, this one is rather easy as the publisher was a bit, shall we say, light-fingered. This view is actually a copy of a much larger lithograph of Milwaukee created by James Palmatary in 1856. Palmatary was active in the 1850s and 1860s, when he was associated with the creation of some 20 views of eastern and midwestern American cities. His lithograph of Milwaukee is very rare and it’s probably nearly impossible to find one available for purchase. This then is the ‘poor man’s’ version. But it is very well done nonetheless.

Zoom in and you will find three sets of railroad tracks: the northbound heading towards La Crosse; the westbound to Waukesha and beyond; and the southbound, a recently completed track to Chicago. While the level of accuracy is remarkable, some items are exaggerated in size, namely all the ships and most of the churches. The lighthouse crowning the bluff at the east end of Wisconsin St. (now Avenue) is impossibly tall.

And note the two large piers on Lake Michigan (also too big). These piers were used for shipping until harbor improvements were completed in 1857 which allowed larger boats to navigate the Milwaukee River. Boat traffic would dominate shipping at this time because of the Panic of 1857,  a financial crash in which most of the fledgling railroads went bankrupt (which was a great financial opportunity for Alexander Mitchell), but that’s another story.

Altogether, Magnus produced about 1,000 varieties of printing, as compared to about 7,500 produced by the then most popular Currier and Ives. His published view of Milwaukee, whatever its origin, gives us a very good sense of what the city was like just a decade after its incorporation.

One thought on “Yesterday’s Milwaukee: View of Milwaukee,1856”