Steny’s Is For Sports and Wing Nuts

Chicken wings, a huge selection of beers, 17 flat screens blasting games, and super jolly crowd. What more do you want?

In 1985, when Jerome and Cheryl Stenstrup bought this old tavern, it was a much smaller place, a regular old South Side tavern of maybe 1,300 square feet operating under the fascinating name, “The Cordovox.” Since then, the tavern, now known as “Steny’s Tavern & Grill,” has been expanded twice and remodeled once and now has 5,228 square feet of space — a good triple the size of your regular neighborhood bar. Accordingly, its capacity has been increased from 50 to 160.

In those three decades, which are to be celebrated during the tavern’s 30th anniversary party Memorial Day weekend, May 23rd – 24th, the area around S. 2nd St. and W. National Ave. has evolved into a nightlife destination. The bar has coexisted with its gay neighbors La Cage, Walker’s Pint, Fluid and others, and has from the beginning welcomed “all races, ages and professions” to its sports-themed hospitality.

The construction changes began almost immediately after the Stenstrups took over the place, and indeed, even before they bought it for $120,000 in 1996 on a land contract from a previous owner, who bought it in the late 1970’s for under $30,000 when the neighborhood was quite dead. Today, the busy property is assessed at $433,000, up from $424,000 a year previously. With fine dining outlets and new housing proliferating in the area, it looks like the Stenstrups’ investment was a sound and prescient one.

The building first appears in city records back in 1910 when its address was 330 Reed St. and it was owned by the Jung Brewery as an outlet for that company’s pre-Prohibition output. The brewery altered the storefront here, probably to make it more attractive for drinkers. Chances are, the place was already a saloon in 1894 when the building appears on Fire Insurance maps. To the east of the building was a barber’s shop, and to the south was a building that housed a restaurant, and, later other businesses. That structure, at 804 S. 2nd St. served in 1944 as a place to pack model airplanes. It later became a sweet shop, flower shop and a place that manufactured and repaired levels. The 804 building has since been razed for the tavern’s expansion.

There must have been something in those soft drinks — and that something was alcohol, you can be sure. Proof of that came in 1934 with the end of Prohibition, when Mayer took out a permit to operate the place as a tavern. It’s former use — tavern! As a condition of getting his occupancy permit, Mayer had to remove some stairs that encroached on the city right of way on National Ave. To this day, it takes a little bit of maneuvering and some sure footing to enter the door here, located on the building’s northwest corner.

An inspection of the lunch room located at 804 S. 2nd St., in the adjoining building, showed that the floors were “dirty,” the walls were “fair,” the ceiling in the kitchen had “loose plaster due to leaky roof,” and that the plumbing and range in the building was “unsanitary.” The tavern itself at 800 S. 2nd St. seemed to be in more appetizing shape. The floors were “very good,” the inspector noted, and the first floor ceiling was metal on plaster. Today, the metal ceiling remains on the original part of the tavern, giving you an idea of how much the place has grown over the years.

In 1970, this place was the L+M Tap, and had an Old Style sign hanging out front. In 1975 Margaret Plantz ran a bar here, by 1980 it was the Cordovox, as noted, and in 1984 Thomas Neidinger ran the place as the Old Tapper, before turning the reins over to Stenstrup the next year. The first thing Stensrup did in 1986 was to remove a non-load bearing partition to increase the capacity of the place, and to cut a 12 foot opening into a brick wall, expanding the bar into the old barber shop.

Today, Steny’s advertises itself with the simple slogan of “You Should be Here!” It hangs above the door, and appears elsewhere in the saloon. Once inside, the visitor is faced with a long oak bar that runs along the south wall of the tavern. There is also an oak floor below, that tin ceiling above, and a number of window seats fronting the busy intersection. Security guards posted at the door look like they mean business. The seats at the bar are swiveling wood, un-backed numbers, and they tend to be filled, especially during chicken wing and fish fry hours. Behind the bar are nice stainless coolers, backlit liquors and the various appurtenances of the tavern trade, all in order, it seems. This place, considering its volume, needs to stay orderly in order to operate efficiently, which it seems to do admirably, thanks to a large staff that keeps hopping. There are 17 flat screen televisions in the bar, tuned to sports, while the night-clubby music that the kids like so much these days plays in the background. Along the walls mirrors are obscured by beer posters, but you didn’t come here to look at yourself, so no loss. The large back room is good for wandering about. The decor is limited, with the exception of a signed poster of Robin Yount, and a few promotional items. An outdoor beer garden is available in better weather.

A sign tells visitors that Steny’s began “with a little dream and a lot of heart,” 30 years ago. Another sign promotes the “T B Buffalo Wings” served here. Steny’s good friend “Tommy Bal sailed the Great Lakes searching for ‘the perfect wing’,” the sign reads. The perfect wing was found in Erie, Pennsylvania. “We start with meaty naked wings, deep-fry them until golden brown. We shake them in T. B.’s signature sauce and bake them until crispy.” The crowd can’t get enough of them.

Another sign tells of “Steny’s ‘Famous’ Bloody Mary — Our Signature Drink.” The recipe dates to Steny’s 1985 opening, and “hasn’t been touched or altered since day one.”

Register for the Pedal Tavern. Photo by Michael Horne.

The tavern also is a registration point for the Pedal Tavern, another phenomenon that would have been hard to imagine back in 1985, especially in this area. Today it is a popular feature of the flatter districts of the city.

One of the biggest contrasts with Steny’s today and with the Cordovox of old, was that I don’t recall there being more than two beers — maybe three — available at the Cordovox. (I would check the place out when playing hooky from the Gay bars in the area.) Today’s Steny’s offers a powerhouse collection of tap beers, with a rotating selection. Almost all are microbeers, curated by Ryan Stenstrup, son of the owners. There are so many beers that the tavern has a beer menu, something that would have seemed incredibly precious during the soft drink parlor days, or even the Cordovox era for that matter. The nearby Milwaukee Brewing Company will debut some new beers at the Steny’s anniversary party, which gives you one more chance to be present at a historic event. And, when you are done with the Memorial Day anniversary festivities, be sure to show up two weeks later, on June 7th, when the Milwaukee Pride Parade marches proudly past this place located on the Straightest Parade Route in America. 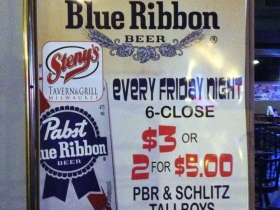 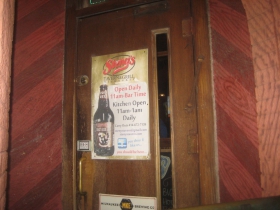 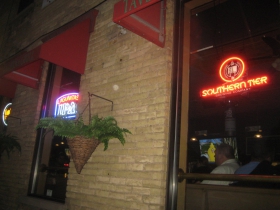 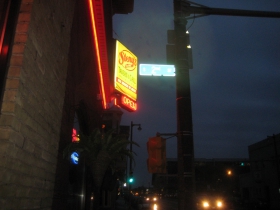 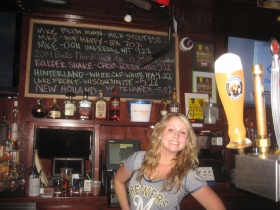 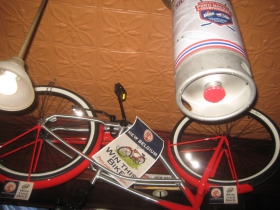 3 thoughts on “Bar Exam: Steny’s Is For Sports and Wing Nuts”