A New Approach to Equal Opportunity

New data shows switching neighborhoods can improve equality. What does this mean for Milwaukee?

It is well-established that children who grow up in high-poverty neighborhoods fare worse on average than those in lower-poverty neighborhoods on a wide range of economic, health, and educational outcomes. What is difficult to sort out is how much is due to the neighborhood and how much to poverty. To what extent do these children fare worse because their families are poor and to what extent because of the neighboring families are poor?

An early experiment from the 1990s in five large U.S. cities attempted to sort this out. Called Moving to Opportunity (MTO), it involved 4,604 families, who were randomly assigned to one of three groups: the first was offered a subsidized housing voucher that required them to move to a census tract with a poverty rate below 10 percent, the second group was offered a standard subsidized housing voucher with no additional requirements, and the third group was not offered a voucher but retained access to public housing.

Initial studies of the experiment found disappointing results. Researchers found that moving to lower-poverty areas greatly improved the mental and physical health and subjective well-being of adults as well as family safety. But the same studies found no economic benefits–the MTO treatments had no significant impact on the earnings and employment rates of adults and older children.

But a paper issued this month by Raj Chetty and Nathaniel Hendren of Harvard University, and Lawrence Katz of the National Bureau of Economic Research reexamined these results. It looked at the earnings of the younger children, those less than 12 at the time of the experiment, but now in their twenties and early thirties. Using tax data, the re-analysis found that children who had moved to the better neighborhoods had higher earnings than those who stayed behind and the difference was directly proportional to the amount of time they had lived in the better neighborhoods. Similarly, those moving to worse neighborhoods had lower earnings than those who stayed behind.

The release of this re-analysis was accompanied by a second paper by Chetty and Hendren, called The Impacts of Neighborhoods on Intergenerational Mobility: Childhood Exposure Effects and County-Level Estimates. Using a much larger sample, it analyzed the effect of families moving from one neighborhood to another on the earnings of their children when they became young adults. Much of the results are on their website, called The Equality of Opportunity Project. These two studies were also extensively covered in the New York Times. 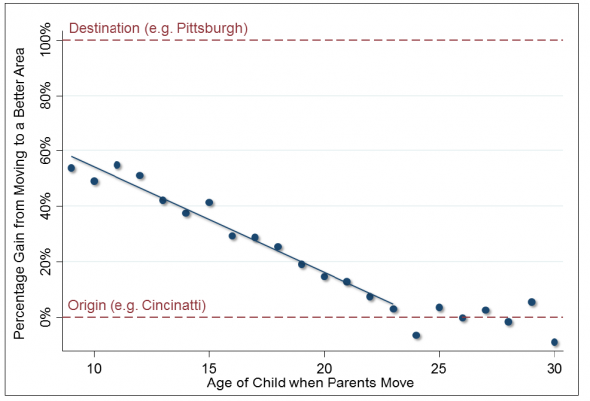 Percentage Gain from Moving to a Better Area

The authors find that growing up in better neighborhoods has a positive effect on children’s earnings, as well as college enrollment. Similarly, worse neighborhoods have a negative effect. They use the example of Cincinnati and Pittsburgh. On average children who grow up in low-income families (at the 25th percentile) in Cincinnati have incomes of $23,000 at age 26, compared to $28,000 for those spending their childhood in Pittsburgh. The authors further find that the difference is linear with the time they spent in a neighborhood while growing up. This is illustrated in the figure to the right, which shows that the earlier age at which the child moves to a better neighborhood, the greater the gain in income. As indicated in the figure, there is at least some impact for any person in the family making such a move, up to the age of about age 23.

The authors find this effect is symmetric. Thus, the children of a family moving the opposite way, from a better neighborhood to a worse one (Pittsburgh to Cincinnati) would on average have lower incomes. The research shows that spending an extra year in a county where the mean rank of children of permanent residents is 1 percentile higher increases a child’s expected rank by approximately 0.03-0.04 percentiles. Boys’ outcomes vary more across areas than girls, and boys have especially poor outcomes in highly-segregated areas.

Chetty and Herndon report several tests to check whether the effect is due to differences in neighborhoods rather than to differences between the families that move. Looking at siblings in families that move they find the neighborhood effect is strongest with the siblings who spent the longest time in that neighborhood. They also looked at families whose move was triggered by an event out of their control, such as a natural disaster or a plant closing. Finally, they find that the effects are consistent among subgroups such as boys versus girls.

On their web site Chetty and Hendren list their calculations of the average effect on earnings of the 100 largest counties on children in families at the 25th percentile. Baltimore City comes in last, but Milwaukee County does not fare well, ranking 93rd among the 100 counties. Generally large cities fare poorly. Also among the bottom ten counties are the counties containing Tucson, Detroit, Fresno, Chicago, Tampa, Orlando, and Charlotte, as well as the Bronx in New York City. Except for King County (Seattle), none of the counties in the top ten include large cities. 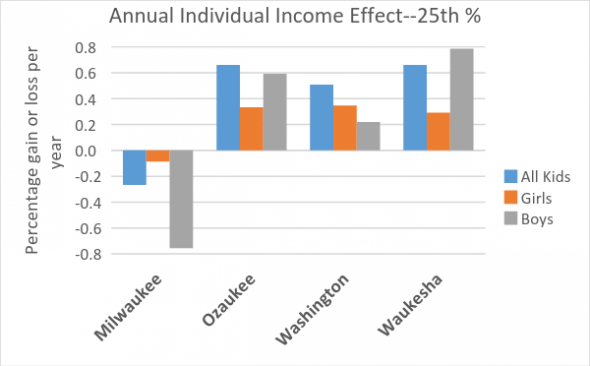 The figure to the right shows the estimates for Milwaukee, Waukesha, Ozaukee, and Washington counties for children growing up in families whose income is at the 25th percentile. The vertical score is the average percentage gain or loss for every year the child lived in the county, compared to the national average.

The clear implication is that poor children are better off growing up in Ozaukee or Waukesha county, rather than Milwaukee County. This is particularly true if they are boys.

The research suggests that a Move to Opportunity type of housing voucher that allowed low-income families to live in suburban counties would be good for economic mobility. It is likely there would be huge obstacles to such a program, however. Locally, Milwaukee’s suburbs have proven particularly hostile to proposals for affordable housing. Transportation would also be a barrier; outside of Milwaukee County and the city of Waukesha, there is almost no public transportation in these counties. 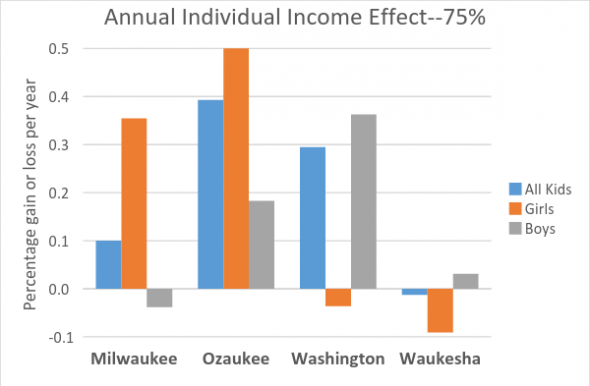 For children growing up in more prosperous families, meanwhile, Milwaukee County fares much better compared to its neighboring counties. The figure to the right shows the same results for children growing up in families at the 75th percentile, compared to those nationally. Particularly for girls, Milwaukee County more than holds its own against Waukesha and Washington counties.

Addressing the last of these issues, a program sponsored by United Way appears to have had success in reducing teen pregnancy. This is beneficial for two reasons: girls who become pregnant are much more likely to drop out of school and children, particularly boys, brought up by single mothers are less likely to be successful. Despite this success, this program has come under criticism from those who fear the message could be damaging to girls.

Changing the other four factors would seem to present huge challenges. I have already noted the strong suburban opposition to affordable housing, making the reduction of segregation or income inequality difficult to accomplish. Lowering crime rates is hurt by the political resistance to getting good data on guns in Wisconsin and the temptation for politicians and others to exploit the sense of grievance both toward and by the police, making partnership between police and residents more difficult, neighborhoods more dangerous, and police work more hazardous.

As to improving Milwaukee schools my experience on the Milwaukee School Board, as well as more recent service on the MPS Charter School Review Committee, makes me pessimistic about the likelihood of seeing better results. Too many decisions are made based on ideology rather than empirical evidence or to protect the interests of the adults involved. But that is a subject for a future column.

3 thoughts on “Data Wonk: A New Approach to Equal Opportunity”