The Meaning of Judge Bradley’s Victory

She carried more assembly districts than Obama or Mary Burke. Are there lessons for Democrats and the GOP in her victory?

At a forum sponsored by the Milwaukee Bar Association, the two candidates for Wisconsin Supreme Court in the Spring election had very different strategies. The challenger, James Daley, ran as a conservative, accusing his opponent of creating the conflict on the court because of her liberal beliefs.

His opponent, incumbent Justice Ann Walsh Bradley, was having none of Daley’s liberal-conservative dichotomy. She said she’d decided to run for re-election to keep politics out of the court. She criticized Daley for taking help from the Republican Party and for spending much of his campaign appearances before Republican audiences.

She also spoke against the referendum to change the state constitution to allow the justices to elect the chief justice. She criticized it as deliberately targeting one individual, Shirley Abrahamson.

In the end, Bradley won with 58.1 percent of the vote, but the referendum also passed, by a narrower margin, with 53 percent of the vote.The recent release of vote totals by the Government Accountability Board allows an exploration of where those votes came from.

Bradley had several advantages going into this election. Most notable was the decision of the big funders on the right not to heavily invest in this election, perhaps in the belief that a sure 5-2 or 4-3 majority was sufficient. Another advantage was the historic reluctance of voters to turn out incumbent judges.

Some conservative voters may have been unhappy with Daley because of his involvement in the John Doe investigation or because of harsh criticism about one of his decisions from Mark Belling. It seems unlikely, however, that this would have caused these voters to switch to Bradley. At worst, they might have decided to skip the Bradley-Daley race while voting to remove Abrahamson as chief justice. Yet the total drop-off from the referendum vote to the supreme court race was less than 5,000, not nearly enough to affect the results. 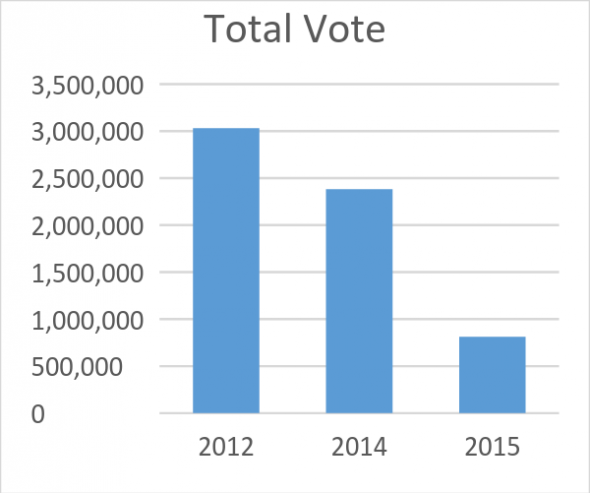 Bradley’s most serious obstacle was the low turnout in a mid-year election with few competitive races. The chart to the right shows the total vote for president in 2012, for governor in 2014, and for Supreme Court justice this April. Turnout was just 800,000, compared to almost 3 million in the last presidential race and about 2.4 million in last year’s gubernatorial race.

It is widely presumed that low turnout favors more conservative candidates, whose voters are whiter, older, and more likely to show up. To the extent that voters voted along party lines, this was likely to hurt Bradley. 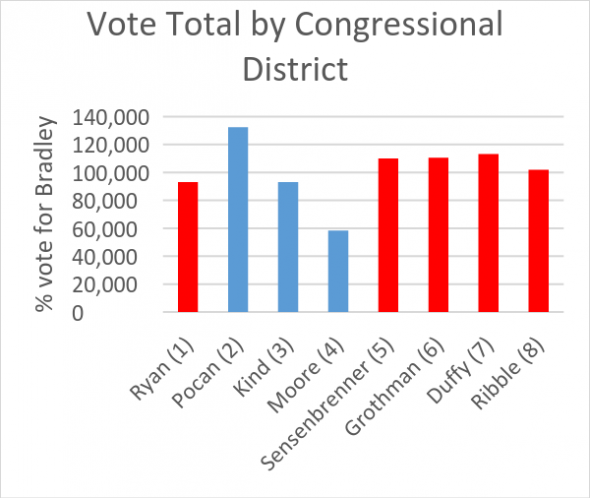 It appears that turnout was a mixed story for the candidates. As the next graph shows, turnout in Milwaukee’s heavily Democratic fourth congressional district was about half that in the fifth containing Milwaukee’s western and northern suburbs. Yet Madison’s heavily Democratic second district had the highest turnout in Wisconsin. (Districts represented by Democrats are shown in blue while those represented by Republicans are shown in red.)

Although nominally non-partisan, the Supreme Court race ultimately reflected the partisan divide in Wisconsin. Where Democrats have done well Bradley did well; where they did poorly she did less well. 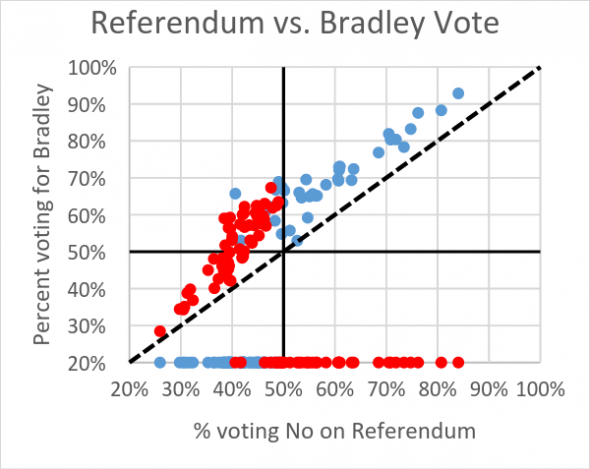 The partisan nature of the voting pattern shows up in the next plot, comparing the percentage vote in each assembly district for Bradley with the “No” vote on the constitutional amendment to allow the justices to elect the chief justice an elective position. The red dots indicate Assembly districts held by Republicans; the blue by Democrats, and results show red district voters had a low percentage of pro-Bradley votes and low percentage of no votes on the referendum. The result was the opposite for blue district voters. With a correlation of .91 the votes on these two items align almost perfectly.

Yet there were exceptions, which favored Bradley. Clearly, there were voters in every district who supported Bradley, but were convinced that electing the chief justice was good policy, even if she didn’t.

The same pattern shows up in comparisons between this year’s vote and the previous presidential and gubernatorial elections. The next plot shows the percentage vote in each Assembly district won by Bradley versus the percentage won by Barack Obama in 2012. The districts above the dotted diagonal lines are ones that Bradley won by higher margins than Obama. 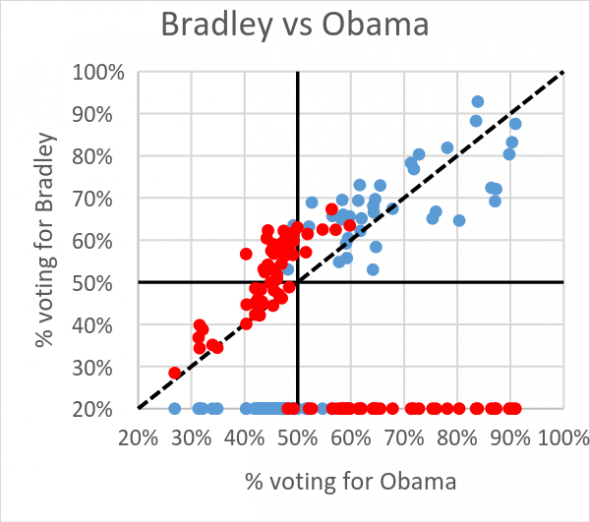 The 31 districts in the upper left-hand quadrant are ones that were lost by Obama, but won by Bradley. In all, she won 74 of the 99 Assembly districts, winning more districts than Obama did. (But Obama benefitted from the higher turnout in red districts.)

A comparison with last year’s gubernatorial election shows the same pattern, though Bradley did even better compared to Democrat Mary Burke than she did versus Obama, managing to win 39 Assembly districts that were lost by Burke. 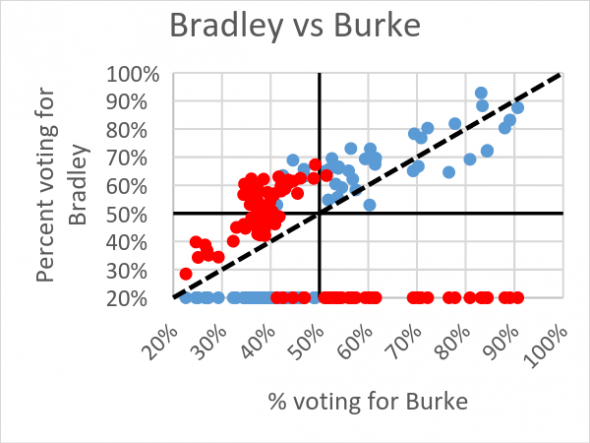 The next graph further underlines Bradley’s accomplishment in broadening her support. She won in 6 of the 8 Wisconsin Congressional districts, including three of the five represented by Republicans.

It appears that two factors explain this year’s election results. First, there was a large number of voters who voted along party and ideological lines. This would account for the basic pattern of outcomes by Assembly district. 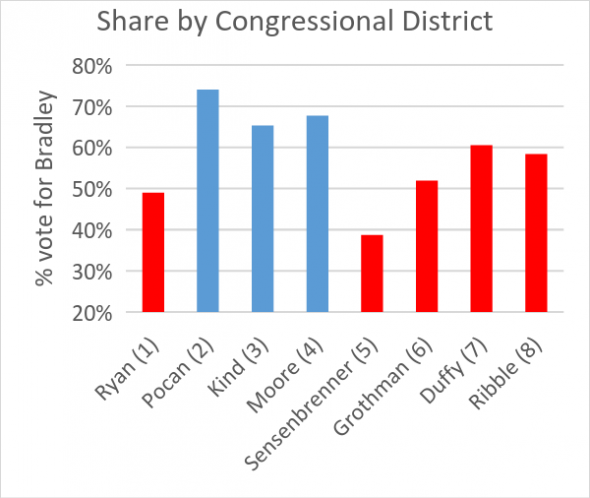 Second, however, there was a minority of voters willing to buck the party or ideological pattern, based on a compelling issue. Bradley was perhaps able to appeal to this group’s weariness with an increasingly politicized and ideological judiciary, though she might have also benefited from incumbency and a lack of funding for her opponent.

Does Bradley’s success in winning over Republican-dominated districts suggest a possible strategy for Democrats in legislative races? Are there issues and candidates that could put some of the districts lost by Obama but won by Bradley in play?

Recent Marquette and St Norbert poll results suggest some such issues. I have listed ten examples below. They include a number of provisions from the governor’s budget and others supported by Republican legislative leaders. These issues are problematic for Republicans because the side supported by most GOP voters is rejected by a majority of all voters.

There is no guarantee that a political strategy based on such issues would be successful. Candidates for judgeships are more able to select the issues they wish to emphasize, by arguing they cannot address certain policies because they must stay neutral should these issues comes before them.

Still, Bradley’s victory suggests the right kind of campaign by the right candidate might draw more swing voters. In every district, regardless of gerrymandering, there are some votes in play if an issue arises that resonates with the electorate. The challenge for Democratic candidates is to identify and run on those issues.

4 thoughts on “Data Wonk: The Meaning of Judge Bradley’s Victory”