How Chisholm Is Reducing Black Imprisonment

A New Yorker story portrays the Milwaukee DA as a super-hero of reform. Hm. Is that true?

It turns out Milwaukee has the solution to the mass incarceration of blacks. Who knew?

We’ve now learned that courtesy of The New Yorker, which has published a piece called “The Milwaukee Experiment,” which portrays Milwaukee County District Attorney John Chisholm as something of a hero for his efforts to reform how prosecutors handled drug crimes in Milwaukee. The story is written by Jeffrey Toobin, one of my favorite New Yorker writers, who has done terrific stories on the U.S. Supreme Court and various legal issues. But this story is more straight reporting, which is not necessarily Toobin’s forte.

Toobin references Michelle Alexander’s book, The New Jim Crow, which found “The United States now has the highest rate of incarceration in the world, dwarfing the rates of nearly every developed country, even surpassing those in highly repressive regimes like Russia, China and Iran,” and “the racial dimension of mass incarceration is its most striking feature.”

There’s little doubt Wisconsin is part of that trend. The story notes a study from UW-Milwaukee Employment & Training Institute, which found that “as of 2010 thirteen per cent of the state’s African-American men of working age were behind bars—nearly double the national average, of 6.7 per cent. The figures were especially stark for Milwaukee County, where more than half of African-American men in their thirties had served time in state prison.” I wrote about ETI’s research last year.

Toobin notes that in 2007, when Chisholm first took office, “the Vera Institute of Justice, a research and policy group based in New York City, had just begun studying the racial implications of the work of the Milwaukee County District Attorney’s office… Chisholm allowed the researchers to question his staff members and look at their files. The conclusions were disturbing.” The Vera study found Milwaukee prosecutors were more likely to prosecute blacks than whites for such crimes as possession of drug paraphernalia (41 percent of blacks vs. 27 percent of whites) prostitution and resisting or obstructing an officer.

Chisholm set out to address the issue and his “most significant innovation,” Toobin writes, was to create an “‘early intervention’ program, which begins after a defendant is arrested but before arraignment.” Those judged better candidates for deferred prosecution may be placed in incarceration alternatives, like drug-treatment or other educational programs.

How has that worked? “To some extent, he has succeeded in his goals,” Toobin writes. “There are many fewer prosecutions of both blacks and whites for low-level drug offenses… On his watch, the overall number of misdemeanor prosecutions in the county has dropped from nine thousand to fifty-two hundred. The number of African-American residents of Milwaukee County sent to state prison on drug charges has been cut in half since 2006.”

But John Pawasarat, the UWM researcher whose data on imprisonment of blacks was cited by Toobin (and who is not quoted in the story) says the story exaggerates the impact of Chisholm’s work. “He’s trying to do prevention which is great, and starting a drug court is a great idea, but making a claim it has anything to do with mass incarceration is ridiculous.” 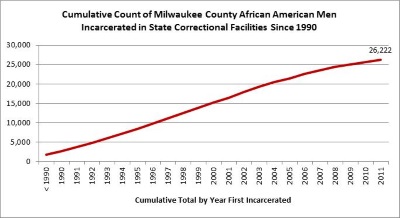 Pawasarat notes that the numbers arrested for offense like possession of drug paraphernalia are small, and that, while there has been some reduction in the annual rate at which blacks are incarcerated, the cumulative number of African American men incarcerated in state prisons continues to go up, as a graph published by ETI dramatizes. “Every year there are going to be new men entering,” he says. And they will probably always have a problem getting a job because they are black males with a prison record, he adds.

Toobin’s story also contrasts Chisholm’s approach with the get-tough-on-all-crime philosophy of Gov. Scott Walker (in passing Toobin also notes Chisholm’s John Doe investigation of Walker) and Sheriff David Clarke. Simply by quoting Clarke, of course, Toobin elevates the role of the sheriff, whose deputies do almost no arrests of criminals.

This is an outsider’s account, of course, which is what makes it interesting if uneven. Toobin is right that “even in poor neighborhoods, Milwaukee still has a lot of sturdy housing,” but wrong about the reasons for the “threadbare” condition of the county Safety Building, where the “wall clocks… haven’t worked since a fire in 2013” and “old records are stored in the cells of an abandoned jail.” He blames economic decline for the county’s inability to spend on maintenance, but the more direct cause is the infamous Milwaukee county pension plan of 2000 and 2001, whose huge costs have continued to constrain the county’s ability to maintain services.

7 thoughts on “Back in the News: How Chisholm Is Reducing Black Imprisonment”