What If Racism Ended Today?

Results of poll by YWCA will be used to develop training sessions for companies in cultural sensitivity.

By Matthew Wisla, Milwaukee Neighborhood News Service - May 3rd, 2015 11:30 am
Get a daily rundown of the top stories on Urban Milwaukee 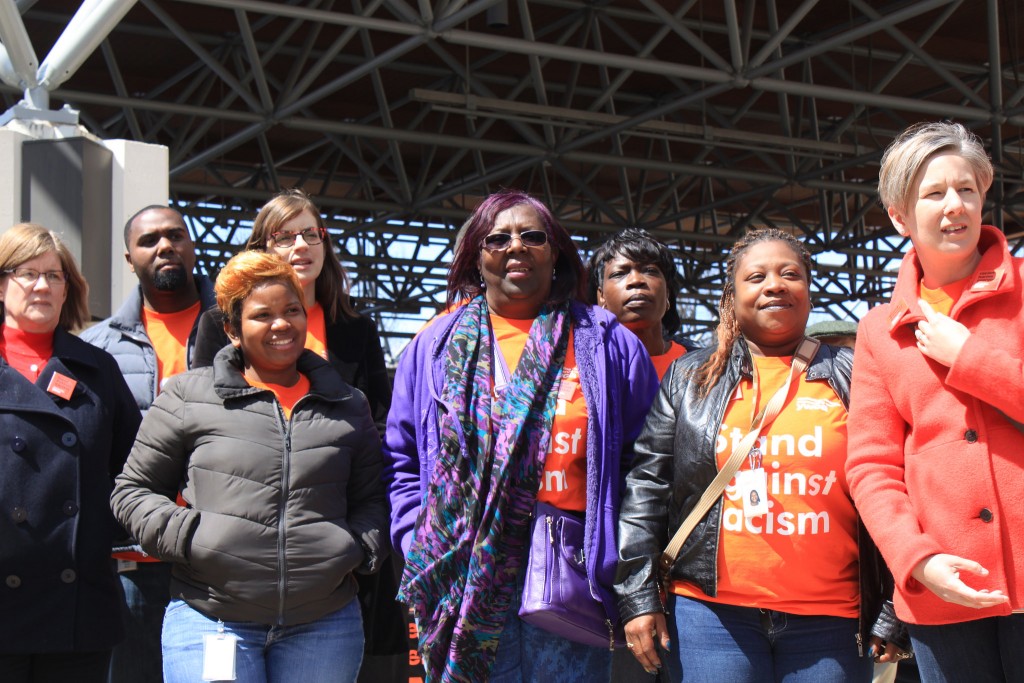 Volunteers prepare to fan out downtown to poll passersby about the impacts of racism. Photo by Matthew Wisla.

The question seemed to take Barney Moore by surprise. Thinking about it he frowned a little and said, “If racism ended today I would sleep better at night. It causes a lot of underlying stress in our society.”

Moore is African American and works downtown in the Milwaukee Center. He was approached by volunteers from the YWCA of Southeastern Wisconsin while on his lunch break recently and asked, “If racism ended today, what would be different?”

The poll was part of an effort by 44 YWCA chapters across the country to highlight racial issues. “We want to raise awareness and get people thinking and talking about the impact of racism,” said Paula Penebaker, president and CEO of YWCA of Southeastern Wisconsin.

The group recorded the responses and will use them to develop training sessions for companies and organizations looking to increase their cultural sensitivity. The Medical College of Wisconsin is among the organizations that have received such workplace training from the YWCA recently. 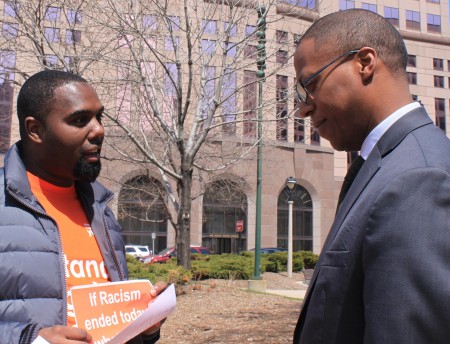 Before fanning out to conduct the survey, about 25 volunteers wearing bright orange shirts reading “Stand Against Racism” were briefed by Penebaker and Mayor Tom Barrett. As an indication of the sensitivity of the topic, most respondents preferred to answer anonymously.

For many, the question brought thoughts of violence to mind. “Think of all the violence and shootings that would end,” one said.

Others mentioned social justice topics. “It would mark the end of blanket judgments,” someone said. “Of course less shootings but also more income equality,” another said.

Recent data collected by the Marquette Law School shows that black males in their late 20s and early 30s earn about $10,000 less annually than their peers. Coincidentally, as the street polling was going on downtown a conference called “Urban Men in Poverty” was taking place down the street at Marquette University, where data on race and poverty were presented.

Commenting on how racism impacts her life day-to-day, Ashanti Roberts said, “Without it things would be a lot different because we would all treat each other better.”

“There would be less animosity and social media would be a much nicer place to hang out,” someone else said. “People would be more open and honest if there weren’t stigmas attached to them,” added another.

Penebaker distinguished between racism among individuals and racism in society. “Even if racism ended between people we would still be dealing with institutional racism,” she said. Several survey participants brought up racially biased hiring and promotions practices.

Racial profiling among police officers is another form of institutional bigotry, Penebaker said. “Officers need training, and then they need supervision and retraining,” she noted. Even good cops can become jaded after years of working in the community and seeing the worst society has to offer. “If the cycle isn’t interrupted that’s when bad things happen between police and the neighborhoods,” she said.

Not everyone thought bringing an end to racism would elevate society to a new plateau. “People are hateful so not much would be different. They would just find another reason not to get along,” one person said. “Right now, everyone is against each other so I don’t see what would change,” another said.

Although most people approached by the volunteer pollsters were willing to share an opinion on ending racism, about 20 percent refused to comment, often saying the topic was too sensitive or uncomfortable for them.

Stephen Crymes said he doesn’t like talking about racism but looks forward to a day when it no longer exists. “Then we wouldn’t have to think about it anymore because even just thinking about racism can ruin your day.”