Leif Erikson at the Lakefront, About 1910

Not long after Solomon Juneau's statue was erected, a knockoff of a Boston-made sculpture of Leif Erikson was erected in the lakefront park. 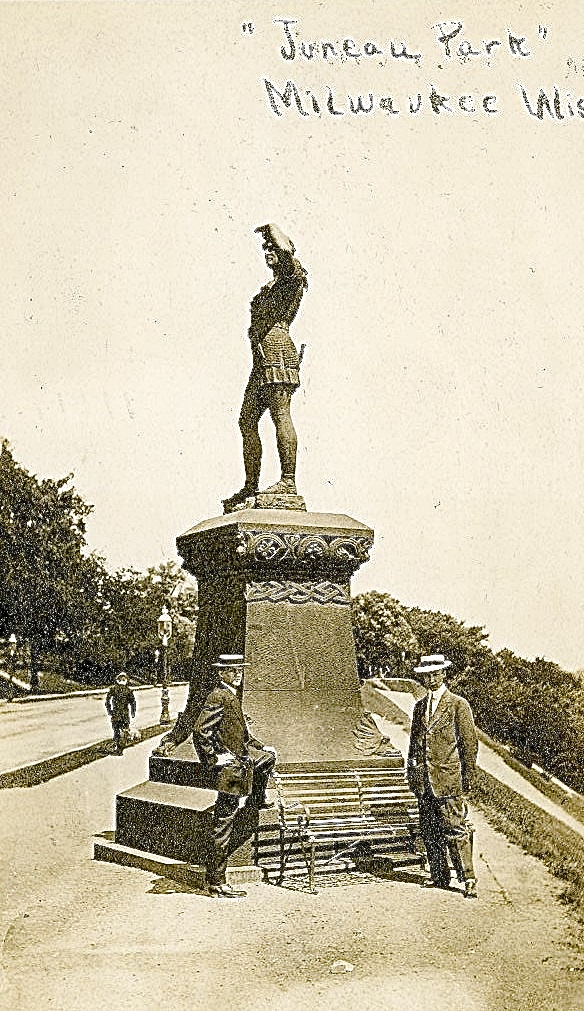 “Leif the Discoverer” and two tourists visiting Milwaukee, around 1910.

The new Juneau Park, established in the 1880s, needed a little extra something. Given who it was named after, the logical thing was to create a memorial to Solomon Juneau, Milwaukee’s first mayor. And so, a 5-feet-by-15-feet sculpture of the city founder was created by artist Richard Hamilton Park, as we’ve previously reported, and the memorial was unveiled on July 6, 1887, and located near where the park meets Kilbourn Ave.

But that’s not this statue. This is a memorial to Leif Erikson, which was erected just a few months later, in November 1887. In the 19th century Norse Sagas about Ericson’s discovery of America were translated into English, and the stories had reached the height of popularity after the discovery of two different Viking ships in 1867 and 1880. And so, in 1887, a statue sculpted by Anne Whitney was erected in Boston on Commonwealth Avenue, to create a symbolic bond between America and Scandinavia.

That apparently inspired Milwaukee as well, which created a copy of the Anne Whitney statue, paid for by donor Mrs. Joseph Gilbert, and it was erected in Juneau Park, near the east end of State St., about two weeks after the Boston statue was erected.

This is a view of the statue circa 1910, a photographic postcard custom-made for the tourists in the photo. The winding paths on the bluff, featured in last week’s featured photo, are clearly visible here. By this time there would also be a much grander Chicago & Northwestern depot to the south of the statue and many more railroad tracks along the lake.

8 thoughts on “Yesterday’s Milwaukee: Leif Erikson at the Lakefront, About 1910”