The spine of Peter and the Starcatcher seems to be the back-story for J. M Barrie’s Peter Pan and our curiosity about how an abused nameless lad changes from simply loathing adults into the eternal boy of heroic adventure and family values.

But that’s the pretend spine that lures the family to the play. The real purpose is to demonstrate the immediacy of live theater and its ability to riff on pop culture just as well any number of popular cinematic hits such as Toy Story or Frozen when they joke around with familiar childhood icons and touchstones. It is proof how inventiveness on the stage is every bit the equal and in some ways the superior because of live audience interaction to compress and stretch moments of comedy and fantasy.

In an honest program note for the  Milwaukee Rep’s final main stage offering through May 24, director Blake Robison, the leader of the Cincinnati Playhouse in the Park which first cast and staged this production in collaboration with the Rep, notes the similarity of the play’s appeal to Pixar films. To which I would add its connection to the late Robin Williams and the outburst of collaborative improv theater companies that now dominate Internet and video sensibilities in this popular trend of adding contemporary whimsy to familiar legends and bedtime tales.

All these productions insert modern references into their playfulness, sometimes masterfully. So even if the era is Victorian, rock star movements pop in as if Neverland was a disco party. It’s just great fun to wink and revel while leaping around time.

But this production also reveals the price of that approach. Lost is the true darkness of child abuse, deprivation and other elements that caused Barrie to imagine a world of lost boys longing for mother and hearth. This spine has gone limp in the rush to entertain. Director Robison substitutes distractions – and quite clever they are – to disguise the lack of insightful meaning. Perhaps that’s what makes the production far more entertaining than any game on your smart phone. But it ought to remind patrons that passing diversion is different than enduring pleasure.

The big chorus numbers and plot developments are written around puckish culture jumping (the Busby Berkeley-Carmen Miranda motif that opens the second act) or topping our in-bred sentiments with a joke. Those “No Place Like Home” meanings  reminiscent of The Wizard of Oz – the selling point that comforts parents — are simply clothes hangers for puns and malapropisms and for the staging inventiveness that turns an open stage into a choreographed tumbling mat.

A dozen well-trained actors go way over the top for laughter as they trade narrative and gimmicks among themselves, concocting a Pan prequel of pirate ships, confused trunks, desert island and a giant grinning crocodile made out of string. But as inventive as their physical bits are, in theater it is the constant wordplay that draws the most frequent guffaws.

This is lip service to the Barrie mystique until the next joke comes along – and it soon does and we are entertained. The storytelling and the dialogue prove convoluted excuses, as if nascent Peter Pan can’t soar in our imagination without complicated explanation. So now we are getting familiar romantic hints about the boy who becomes Peter and the clever tomboy Molly whose relationship to Wendy will be revealed.

Were it not for the trappings of traditional British stage clowning (men dressed as women) and endless and amusing star-crossed words and parodies — even Blazing Saddles bean jokes and gross body sounds that always send eight year olds and adolescents into gales of giggles — we would more quickly realize how cloying is the pretense of any lasting thought to fly home with.

Not to deny there is fun while it lasts. At least half the cast keeps us surprised by individualized inventive excursions. This is particularly true of Tom Story (what a great name for an actor) who blends Julliard acting training with Bert Lahr-era burlesque and spontaneity as Black Stache, the prancing mincing villain we know will turn into Captain Hook. As with Peter it is a plot curiosity for the customers – a hook as it were — to anticipate how and when he transforms. Story makes the most of that moment and proves that is why a live audience allows extended hysteria that a mere movie can only envy.

Joanna Howard as Molly hits all the smart notes not just of fine singing but of girlish impatience in an ocean of chauvinistic men. Stepping out of the ensemble, she walks the comic line between ingénue and mocking ingénue expectations. Her several made-up languages are amusingly done, part of her secret mission and the “starstuff” she carries in a special amulet. But the less you know about all those plot maneuvers the better.

While Howard handles this double edge well to reduce the tendency of the script to telegraph feelings, the problems are deeper for Noah Zachary as the boy who becomes Peter. Howard has the personality and pinpoint accuracy to carry us with her, but Zachary falls back on a surface earnestness edged with stock company defiance. The trick for the cast is to have fun but let us peek under the postures, and Zachary is not alone in not quite knowing how to find a human underpinning to the horsing around.  The director isn’t helping them there.

So interdependent are the production values that an outsider would be pressed on accurate credits for the technical integration among scenic designer James Kronzer, costumer David Kay Mickelsen, lighting by Kenton Yeager, various sound designers, casting and movement specialists and property masters.

All deserve praise, but let’s not confuse their crafts with full creativity. Both the play’s pleasure and problems are inherent in this production, though other outings might provide a better balance of purpose and joshing. The idea started with children’s literature cleverly imagined to create a past for Peter by co-authors Ridley Pearson and topical humorist Dave Barry. The talented staff at Disney working with experienced playwright Rick Elice and incidental music by Wayne Barker succeeded in a Broadway stage adaptation in 2012 and commercially successful variations off Broadway, on tour and now with this technically centered production that combines casting choices and reduces costs among two noted regional companies.

There’s nothing wrong in this age of survival with catering to a new family audience while keeping the old, but let’s not pretend that wasn’t most of the reasoning, more so than introducing or polishing theater jewels for us to examine.

The production is so interwoven with modern culture references – Michael Jackson, SNL, flamboyant flourishes, goofy posturing – that most youngsters get the jokes more quickly than many adults. Vaudevillian proficiency combines with a parade of literary allusions that have actually become mocked clichés. So you don’t have to know this is from Walt Whitman and that is from Shakespeare or John Donne – most adults and certainly most children won’t know the antecedents and it doesn’t matter. This is a romping anachronistic style that disguises the planning involved, just as animation movies never dwell on the history behind the visuals and the voices.

The great ones reach deep into our psyche. This production doesn’t. It’s more pop-catcher than starcatcher.

Peter and the Starcatcher Gallery 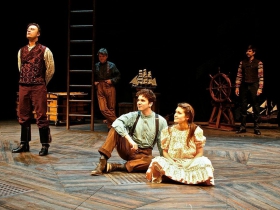 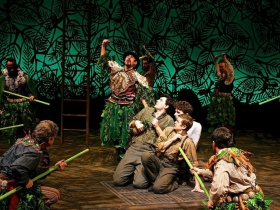 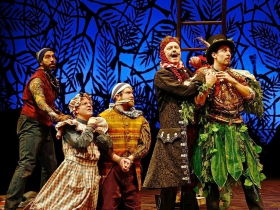 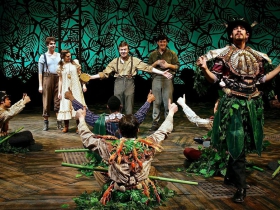 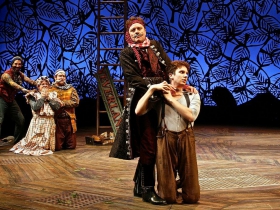 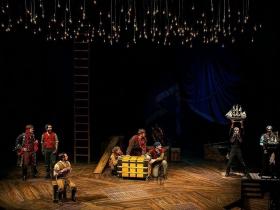