Plus, a new parking plan for the Pritzlaff Building and a huge increase in wedding bookings at the Pritzlaff. All were revealed at Third Ward ARB meeting. 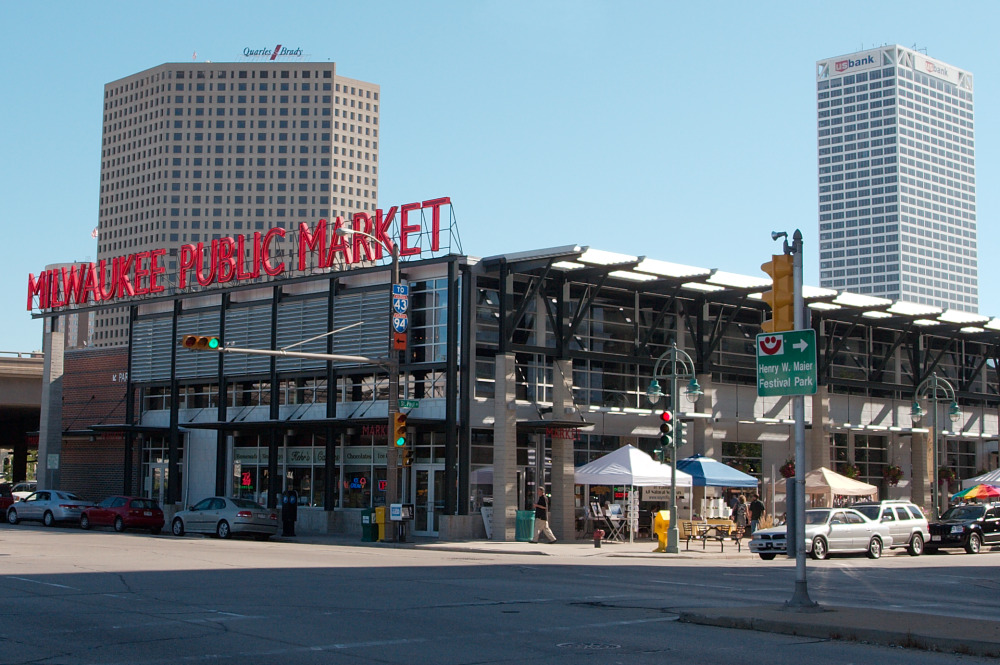 Milwaukee Public Work by Dori. Licensed under CC BY-SA 3.0 us via Wikimedia Commons 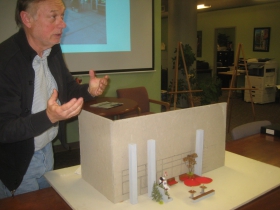 David Ware, the manager of the Milwaukee Public Market, is an artistically talented son of an architect, and many of the displays and constructions at the market are his handiwork. So it’s no surprise that when he appeared before the Historic Third Ward Architectural Review Board to seek approval for an outdoor cafe for Anodyne Coffee along E. St. Paul Ave., he brought along a handmade model of the changes, mounted on a hunk of drywall, with a convenient carrying handle for it.

The model showed the portion of the building to be impacted, namely the western couple of bays of the 2008 building’s south wall fronting the coffee shop. Ward would construct a cement seating area that could be removed during the plowing season. “We’ve got a forklift. We’ll just move it away.” He would also construct a permanent low wall and fountain as a water feature to calm the noise and wind of the corner. A couple of tables and a plastic model of Sylvester the cat (for scale) completed the charming vignette.

An outdoor cafe would be a help for Anodyne, as it has been for Colectivo across the street. Board members did not raise any issues about the general plan, noting it would only take up about as much space as do the planters and other stuff that’s out there right now.

The biggest concern was with the proposed plastic chairs to be used by Anodyne. They belong to the coffee shop, Ware said, and are part of the cost sharing of the project between Anodyne and the Market, which itself is owned by the Historic Third Ward.

He was told that the board usually prefers wood or metal chairs outdoors, which will be inevitable once the strong winds of the ward blow the plastic ones into the lake.

Finally, before the plans were approved, there was a consensus that the market’s design and architecture make it clear that the area inside is a series of stores, and that additions like the proposed coffee terrace and the existing Tiki Bar at the St. Paul Fish Company along the N. Broadway facade of the building, conform with the general spirit of the place, identify the various merchants and enhance the vitality of the street. They are essentially window displays, and are not without their charm. (Pat Nedobek, impresario of the Tiki Bar, is itching to get it open again, but is thwarted by the lousy weather. His sister, Beth Collins, remarked that her brother and co-worker at the family business becomes “warm and fuzzy on the outside” when he’s not cooped up on the inside.)

The motion approved, Ware lifted up his model by its handle, tucked Sylvester the Cat away, and headed back to the market for his next project.

Parking and Lawsuits at the Pritzlaff Building

In 2006, after months of preparation, developer Kendall Breunig of Sunset Investors received the approval of the Historic Third Ward Architecture Review Board (ARB) to construct a new parking structure to serve the historic Pritzlaff Building, 351 N. Plankinton Ave.

Wednesday, April 22nd, 2015, he was back to ask members of the board to approve some changes he had made to the plans over the years.

What took him so long?

For one thing, a little thing called the Great Recession intervened, creating a horrible time in the real estate development industry. Only now is the market recovering, with demand for historic buildings like the Pritzlaff at an all-time high due to demographics, market pressures, and the ready availability of financing via the threatened Historic Tax Credits.

Other complications took up three years of Breunig’s time: He discovered an underground power line running through his property. The line is owned by American Transmission Company. Further research showed that the company had never filed an easement on his property, so could they kindly remove or relocate it? he asked.

The company’s response, Breunig told the board, was “Sue us.” 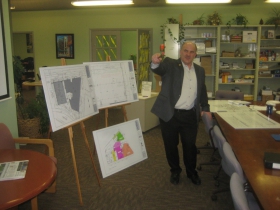 That he did, initiating a process that he was to learn could stretch out in the courts until the end of time. You don’t beat American Transmission Company, he said, unless you had unlimited means and time, so he settled with the utility giant, after learning that the Public Service Commission would probably rule in the company’s favor, easement or no easement. “We would have been in court forever,” he said.

The changes he was thus forced to make to the proposed parking structure required board review, so here he was, in person, to present his case, armed with a slide show and a series of renderings on panels.

What sort of compromise does one make when dealing with a firm that has buried power lines on one’s property?

The company required that the grade of the structure not be altered and wanted ten foot high access in the vicinity of the power line for maintenance vehicles, (a ten foot height is practically a cathedral ceiling in parking structures). The bays of the structure would have to be 60 feet wide, greater than in the original plan, and the building had to be shifted about ten feet west from the originally approved proposal.

Additionally, the first floor of the parking structure could not be concrete: it will be asphalt so the power company’s ten foot tall machines can dig it up when needed.

Breunig said the National Park Service suggested the building facade be of brown brick, not Cream City brick, so as to provide contrast with the 1876 structure it is to serve. He added that some of the details of the facade would reference its neighboring building.

Board members discussed the matter, and were most concerned that Breunig’s building would have its structure revealed on the west side, and that whatever the building’s design would be, it should wrap around the corner in a cohesive fashion.

They had no problem with a contemporary building on the site (“we don’t feel a necessity that the building have a historical character,” one said, “it’s next to the Post Office,” another added pungently), but would prefer a little more verticality in the design, members agreed in discussion.

“Stick to the principles of rhythm, proportion and scale,” suggested board member Chris Rute.

Acting Chair Matt Jarosz said of the building’s location, “you can feel it’s not in the Third Ward,” which, to most readers would go without saying. So why was the ARB debating it in the first place? The Pritzlaff Building and the gas station at 350 N. Plankinton Ave. are indeed within HTW boundaries, and are the only two of its structures located west of the Milwaukee River. They have been in the HTW since the beginning, largely as a measure to ensure the preservation and ultimate redevelopment of the then-vacant Pritzlaff, and that the gas station and vacant property to the south complement the development on the opposite shore.

And yet, as Breunig noted, only the east ten feet of the proposed building lies within the district’s boundaries.

Breunig also received approval for a minor change to the existing Pritzlaff Building. A proposed exterior staircase of 7 stories, located 106 feet south of the property line would be reduced to two stories, and encased with Cream City Brick salvaged from new window openings in the building.

The Future of the Pritzlaff Building

Breuning also gave an upbeat assessment of the Downtown – Third Ward real estate market to the members of the Historic Third Ward Architectural Review Board. Finding a use for the Pritzlaff was at first perplexing, but by some measure of serendipity its first floor has proven to be a popular event destination, with a particular emphasis on weddings.

Breunig says he has already booked 103 events for 2015, and did 115 last year in the raw, loft-like space. With serendipity comes synergy, apparently, since potential tenants are now calling him all the time, he said, after years of trying in vain to get people interested in the space. A bridal consultant and a wedding cake maker drawn by the number of events in the building, have expressed an interest in renting space, he said.

County Executive Chris Abele and his CSA Partners venture fund have leased 35,000 square feet of the second floor of all six Pritzlaff buildings for Ward4, a business incubator. Breunig said the incubator could potentially start small businesses in cubbyholes and graduate the lucky ones right up to a corner suite. [Perhaps Abele could start up a charitable fund to eventually donate a replica of his county courthouse office to the incubator.] Work on the entire second floor is underway at this time, Breunig said.

Next up will be an apartment build out on the upper floors. This is expected to be completed in late 2016, he said. 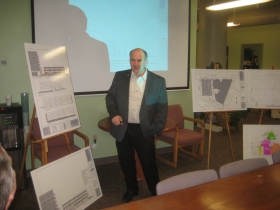 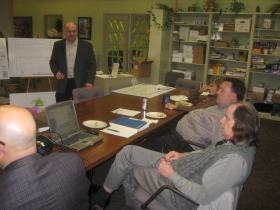 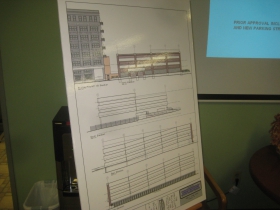 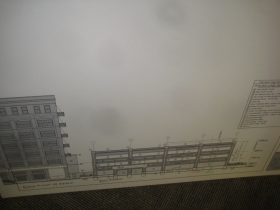 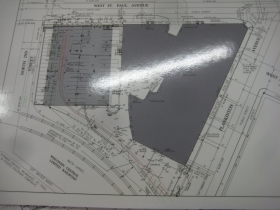