$1 Million Plan to Upgrade Near West Side

By Brendan O’Brien, Milwaukee Neighborhood News Service - Apr 19th, 2015 09:17 am
Get a daily rundown of the top stories on Urban Milwaukee 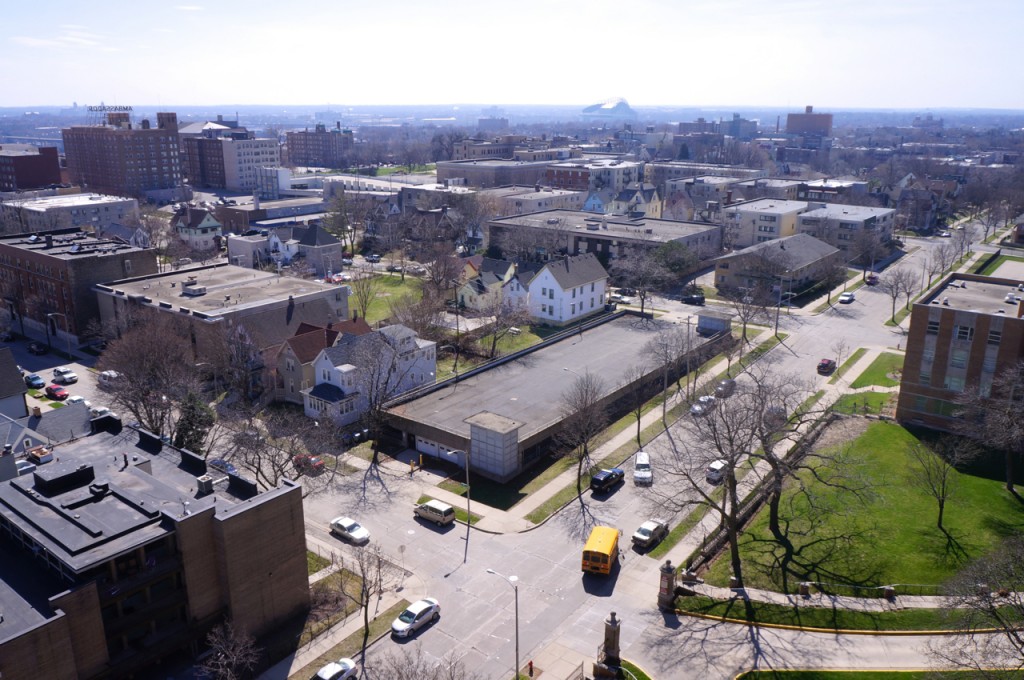 The near west side as seen from the roof of the Milwaukee Academy of Sciences, 2000 W. Kilbourn Ave. (Photo by Adam Carr)

Melvin Mitchell sat on a stoop intently watching a group of young men and woman congregate across the street outside of a tobacco shop at the corner of 27th Street and Kilbourn Avenue.

“There’s so much going on around here that I don’t know what to say … the crime runs deep … and the police do nothing,” he said as he sat outside a row of boarded-up storefronts.

Moments before the 78-year-old made his daily mid-morning stroll along 27th Street, city officials were having their own gathering nearby at the Harley-Davidson facility, where they unveiled a plan they hope will address Mitchell’s core concerns and revitalize the near west side area.

“If we find a way to work together … I think great things can happen,” said Marquette University President Michael Lovell at the press conference, noting that the area is home to about 40,000 residents and 200 businesses. “We have all of the elements to be successful. We just need to enhance those elements.”

The plan is intended in part to change the perception of the neighborhood, Lovell said. This will be accomplished, according to officials, through housing improvements, commercial corridor development, neighborhood branding and a focus on safety.

The PARC plan also consists of creating a community prosecution unit made up of an assistant district attorney and a coordinator who will work with the police department government agencies and community organizations to reduce crime and prevent domestic violence, according to the organization.

“This is a very exciting time. Be excited about it. This is historic,” Milwaukee Police Department Chief Edward Flynn said.

The crime reduction portion of PARC mirrors a similar effort by Washington Park Partners that reduced crime by 30 percent in that neighborhood in its first year, according to the Near West Side Partners. 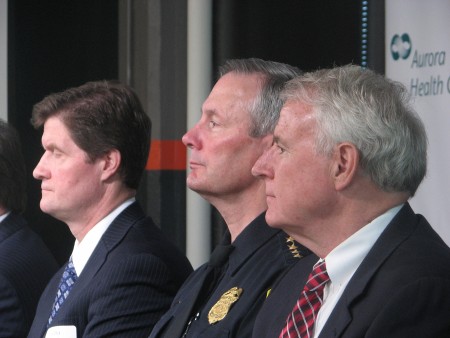 “Whatever kind of help that we can get to bring up the neighborhood and to help the people…I am all for it,” said James Hall, 60, standing outside his apartment building down the street from the Harley-Davidson facility. “The kids need to know that the police are in their corner and not their enemy.”

Hall said that while he appreciates the asset promotion and crime reduction effort, bringing good-paying jobs to the inner city is a fundamental key to addressing poverty and crime.

“You can’t have people working for the minimum wage…they have nothing,” he said.

According to officials, the initiative will be driven by public health and safety data gathered and analyzed by Marquette University’s Center for Peacemaking. They also promised to get residents and business owners involved in improving their neighborhood.

Near West Side Partners was formed in January. It will focus its efforts in the area bounded by Interstate 43 to the east, Interstate 94 to the south, Highway 41 to the west and north, Vliet Street west of 27th Street and the north side of Highland Avenue east of 27th Street.

“This is a jewel that we have right before us and we have an obligation as a community to do what we can to bolster and shine up this jewel once again,” Mayor Tom Barrett said.

5 thoughts on “$1 Million Plan to Upgrade Near West Side”