This lovely Colonial has abundant nooks, color-coordinated ceilings, and a family whose parents have been arrested for welfare fraud. 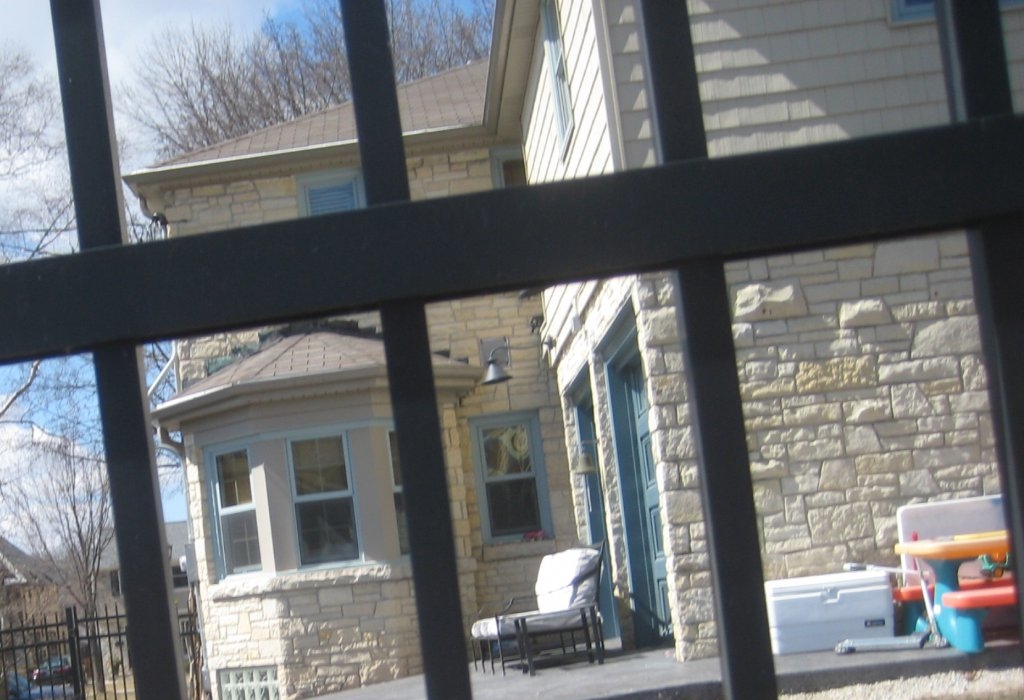 The Milwaukee Journal Sentinel’s “At Home” feature asks readers for their stories about “cool, funky or exquisite” living spaces they know of.  It is considered by some to be a social, and, possibly, economic accomplisment to have one’s residence appear in “At Home.”

This is red meat for those of the bourgeoisie, whether petite or grande, who are more than willing to nominate their own digs in order to accumulate, retain, or regain social status points. People with a knack for design and a mercenary bent use the feature to show off their talents to potential customers. See: “Designer’s Apartment is All About the Lighting,” “Decorator … Fills Elegant Home with Holiday Collectibles”

The Village of Whitefish Bay is fertile ground for “At Home” stories. [“Vintage German Ornaments Enhance ‘Antiques Roadshow’ Appraiser’s Home,” “Renovations Help Make Whitefish Bay Home Jolly] and it is here that in 2012 readers met Mary Carini Gallagher, a “designer who fell in love … with the Lannon stone fireplace, leaded glass windows and creative possibilities” of our House Confidential feature this week.

“Country, City Meet in Blended Family’s Whitefish Bay Home,” the story’s headline read, as readers learned that Carini’s business, “Eye 4 Color, specializes in color and design.” No white ceilings in her home! “It puts a cap on your house,” Carini Gallagher declared. Instead she mixes the wall color with three parts white, “to give the ceilings in every room depth and interest.”

Her blended family includes Todd Schaller, the “country” part of the domestic equation, a concrete supplier and “avid outdoorsman,” which “explains the occasional deer head on a wall, or the walleye mounted above the chalkboard in the lavender kitchen,” we were told. The couple together had seven children, five of whom were in residence at the time of the story’s publication, and “there’s usually a collection of kids and their friends hanging out in the living room or banging on the drum set in the finished basement,” the Journal Sentinel reported. Life was sweet indeed for the family living in this lovely home just a few blocks from Klode Park and the lake.

Having so prominently introduced society to their $379,200, 1,420 square foot dwelling with its custom chandeliers, the cozy “nook” off of the pink master bedroom, the “nook” off of the kitchen, and another “nook” beyond for serving beverages, the Carini Gallagher – Schaller family now finds itself under the less welcome scrutiny of the Milwaukee County District Attorney.

At the end of March the home was raided by officials who had obtained a search warrant to seize evidence that might link the couple to ongoing public assistance fraud. It appears that the Journal Sentinel article did not attract the attention of state officials when it appeared, but some anonymous reader later sent a clipping of it and other documentation that led to an investigation as to whether the couple collected as much as $115,000 in unlawful benefits, including $64,000 in Food Share (food stamp) benefits, $51,000 through Medicaid, free and reduced school lunches for her child and other government relief not usually associated with the residents of North Shore Lannon stone homes with abundant nooks and color-coordinated ceilings. Carini Gallagher’s decorating philosophy may have been “less is more,” but her approach to financing leaned in the opposite direction.

This hubris-induced downfall must be particularly difficult to live down in the Village of Whitefish Bay, which, like Milwaukee, is laid out in a grid, with small lots and a sidewalk in front of every home. This may be the classic urban land use pattern, but Whitefish Bay is hardly metropolitan.

“Small Town” is more like it, and I can’t imagine a worse community in the entire metropolitan area to be the resident welfare fraudster. You can run, but you most assuredly cannot hide here. This is a town of many rules and regulations, with strict compliance thereof expected from one and all.

There are no taverns in Whitefish Bay, unless you consider the tap room at Pandl’s Whitefish Bay Inn to be a saloon, which it certainly is not. You want to get rowdy and have fun? Go to Glendale! There hasn’t been any fun in Whitefish Bay since the Pabst Resort closed in 1914.

Whitefish Bay has a homeownership rate of 83 percent, with 76 percent of the residents having college degrees, a median household income of $100,769 and a poverty rate of 3 percent among the 14,125 people who call this 2.13 square mile village home. The community has three Lutheran and two Catholic churches, along with Christian Science, Episcopal and Methodist congregations, all of which have supported programs to help the genuinely poor and needy in the community.

Carini Gallagher and Schaller would not fall into that category. And if the claims against them are proven, they could face maximum 10-year sentences. The couple are free on signature bonds, and the DA is expected to charge them this week. The children are probably already suffering — the playgrounds of Whitefish Bay can be tough.

Unless the family has another home to escape to (which wouldn’t help the welfare fraud case much) it looks like they are imprisoned for now in their Whitefish Bay fishbowl, trapped as they are on their 50′ x 120′ lot, surrounded by neighbors and subject to the scrutiny of passersby on busy Santa Monica Boulevard.

The residence, known to the Wisconsin Architecture and History Inventory as the George and Maud Janisch Home, was built in 1936, possibly as a lark, since it apparently predates many of the other homes in the area. (A notable exception is an 1860s home a few doors to the north which is undergoing a renovation.) It is classified as a “Colonial Revival” and is symmetrical from the street view. Its quality of materials distinguishes it more than its size or design.

The home was probably the pride and joy of the Acme Realty Co. Subdivision #1 when it was built by the Janisches who were in their mid-fifties at the time, with two children in their thirties living there with them according to the 1940 census.

Janisch, an Austrian native, took out a building permit for the $5,500 home in 1935, listing a current address of 1012 W. Becher St., Milwaukee, which was then and is now a world away from the North Shore. A garage, for which there would have been absolutely no room on Becher St., was constructed with, and attached to, the new Whitefish Bay house — a rather extravagant gesture for the time, especially for a not-too-large home.

By 1962 the home was owned by Dr. Neil Thomson, medical director of the city’s Cerebral Palsy clinic, and the sort of person who probably put a cap on his house by painting his ceilings white. Doc Thomson eyed the attached garage and had a two story addition built atop it, spending $5,000 on the improvements.

With the home over three decades old in 1957, Thomson spent $2,595 on interior remodeling, including the installation of a garbage disposal.

By 1977 the home was owned by Lawrence Foreman who was soon to feel the sting of scorn from the village government for his failure to follow village-dictated landscape norms.

A note from the Village Building Inspector laid it on the line in 1978: “The bushes on each side of your front yard are much greater than [the permitted 3-1/2 feet] in height and planted so close that a person cannot walk between them. … Kindly trim, cut, or remove these barriers to conform to the ordinance.”

With the front yard appropriately denuded, the residence passes into the hands of Michael and Paula Gillespie, Marquette professors who completely gutted the kitchen in 1992, spending $18,000 on the project. In 1995 the Gillespies spent $5,349 to have Badger Fence Co. surround the yard [to the extent permitted by Village Ordinances] with a metal fence.  That construction gives the home, for now, the unsettling look of being behind bars from certain vantage points, like the alley, where the toys of innocent children provide a stark contrast to the drama that faces the adults within the Lannon-stone-veneered walls.

By 2009, Schaller and Carini Gallagher owned the residence, even though she continued to file papers with the state claiming a Shorewood address. Acting as his own contractor, Schaller tore out and replaced the kitchen cabinets, and added drywall, a sink, a dishwasher, disposal and the bar in one of the kitchen’s nooks.

The Village said several permits were expired, and that Schaller was missing required inspections of the work. These things — and malfeasance of any kind, really — do not go unnoticed in The Bay. 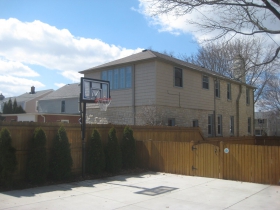 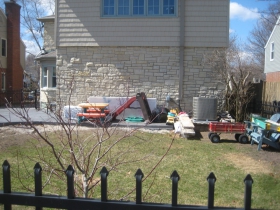 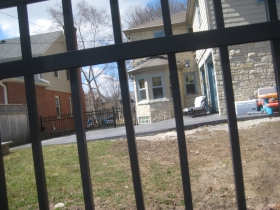 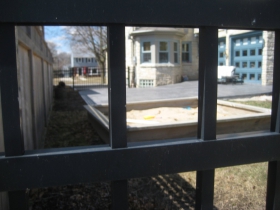 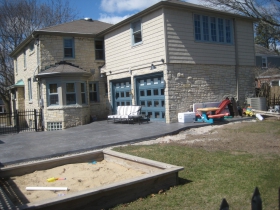 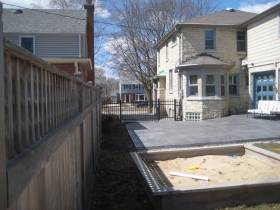 How Milwaukee Is It? The residence is 8 miles from Milwaukee’s City Hall.