Hom, Home on the Range

One tends to be suspicious of corporate-owned restaurants, which are often designed to have a broad but shallow appeal. But the restaurants of the SURG Restaurant Group include some of Milwaukee’s most satisfying, including Carnivore and Umami Moto, and the recently opened branch of Hom (pronounced “home”) in the Bayshore Town Center (there’s also a branch in Brookfield) continues that satisfying streak. The menu is designed around locally-sourced ingredients and Wisconsin-themed recipes, served in a pleasant setting with a North Woods atmosphere. The interior is cozy and labyrinthine, with several dining rooms and a bar with a handsome modernistic fireplace. The drinks are well made, the wines are well chosen, and there is a large selection of artisanal Wisconsin beers.

The menu is extensive with an emphasis on dishes that evoke Wisconsin, like beer-battered cheese curds made with New Glarus’s Spotted Cow beer ($8) and a Lazy Susan with braunschweiger, smoked trout and Ma Baensch’s pickled herring ($15). Other appetizers include a tasty shrimp cocktail ($10) with wood grilled (rather than steamed or boiled) shrimp and a nice homemade cocktail sauce, and shrimp and grits topped with Klement’s andouille sausage ($11). The grits in the latter were wonderfully creamy, though instead of the plump whole shrimp you expect in this dish, they were cubed and the portion rather meager, more sausage than shrimp.

Hom has a wide range of soups, salads, sandwiches and skillets that extend the Wisconsin theme, among them beer cheese soup with aged Widmer’s cheddar and Nuske’s bacon ($5), Green Bay chili ($6), a Wisconsin macaroni and cheese with the same cheddar and bacon as the beer soup ($11) and a cottage pie ($13—OK, not really a Wisconsin dish).  The salads include a nice Caesar with a pungent dressing and anchovies on request ($6/9) and a hearty chopped salad with blue cheese and bacon ($10).

Most of the entrees I’ve tried have been outstanding. The pot roast ($17) was one on the best I’ve had, made with Hidden Creek Angus beef.  Most pot roasts in restaurants have a fairly thick sauce; this one was light and short, which let the flavor of the very tender beef come across more clearly.  The bacon-wrapped meat loaf ($15) was made with Hidden Creek beef and pork and had a similarly clear flavor, while the more complicated walleye ($19), with a pecan and panko crust and a maple demi-glace, was rich yet balanced.

The only entrée I had that didn’t live up to expectations was the beef stroganoff ($15): though it was a comforting dish with lots of nice mushroom and dill flavors, it really was more like egg noodles with a meat sauce than the traditional strips or chunks of beef in a cream sauce garnished with noodles. And though I haven’t tried them yet, there are several appealing steak, chop, rib and chicken dishes, as well as a fish fry served every day. Desserts (all $7) include a tempting caramel bread pudding and s’mores made with chocolate mousse.

Hom, like most corporate restaurants, is meant to appeal to a wide range of diners, but with its attention to ingredients and preparation manages to do so without compromise. And the setting, with its North Woods, supper club feel, induces a sense of well-being. Now if they would just add a Saturday prime rib. 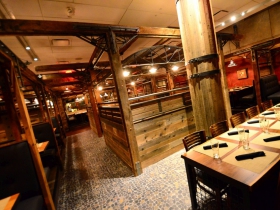 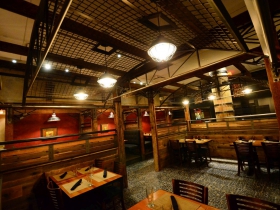 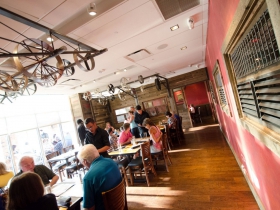 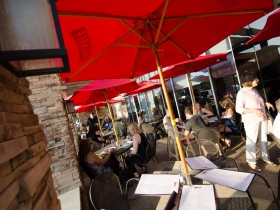 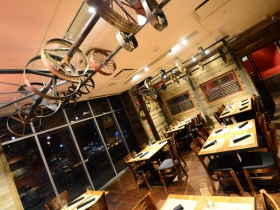