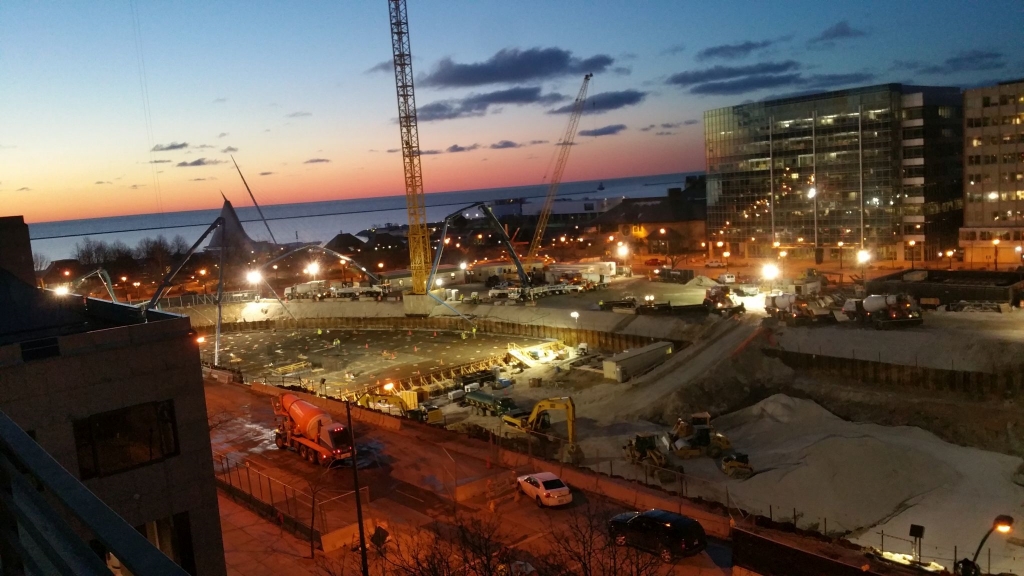 Saturday morning during the pour. Photo courtesy of Northwestern Mutual.

The “biggest” event of this past week in downtown Milwaukee wasn’t Wisconsin’s 85-78 win over Arizona to reach the Final Four, it was Northwestern Mutual‘s 27-hour concrete foundation pour for the Northwestern Mutual Tower and Commons. When finished, the $450 million, 32-story building will be the largest building under one roof in Wisconsin at over 1.1-million square feet.

Starting at 7 p.m. on Friday, more than 250 Milwaukee-area construction workers helped pour 10,000 cubic yards of concrete, and this went on for 27-hours straight. Fifty concrete trucks made over a 1,000 trips delivering cement from concrete plants located in Milwaukee, West Allis and Menomonee Falls.

According to John Gardner, of Northwestern Mutual, the pour “was a big success.”

Gardner also explained the next steps in the project. Currently, the concrete is slowly cooling under tarps because it heats up to 122 degrees Fahrenheit during a pour like this. Water is being circulated to consistently reduce the temperature and allow the concrete to properly cure. After  7 to 10 days sheer walls will be installed around elevator pits and stairwells. An 18 inch base of gravel will be laid over the concrete mat to allow for installation of drain tile, floor drains and electrical wiring. Once that is complete, another layer of concrete will be poured to form the floor of The Tower.

Starting in May or June the steel framework for The Tower should start coming out of the ground.

On the western edge of the site, construction crews are working on concrete footings for The Commons and continuing the south atrium demolition. In the middle of April, an additional crane will be brought in to finish removing the steel beams from the south atrium and begin installing steel for the new atrium. Demolition of the south atrium is scheduled to be completed by the end of April. 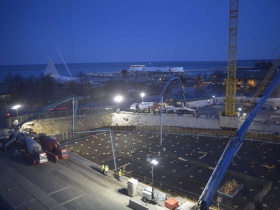 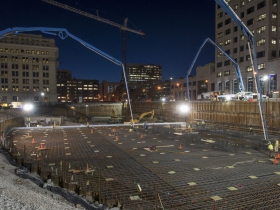 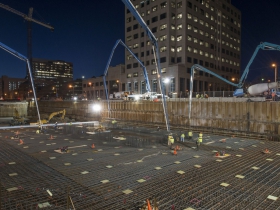 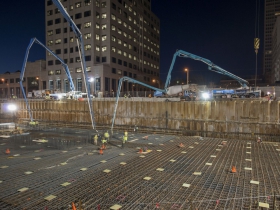 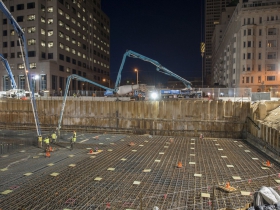 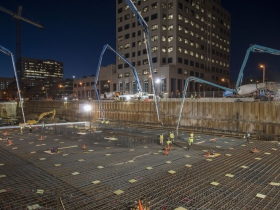 Time-Lapse of the Pour