Meraki, the Wildest Menu in Town?

The Walker’s Point restaurant is worth visiting just to read the menu. The food is pretty good, too.

When I reviewed Bartolotta’s Rumpus Room, I thought I’d seen it all in terms of restaurant-menu chaos. But Meraki in Walker’s Point has the Rumpus Room beat hands down. But there’s a difference: Instead of actually having a theme with a targeted guest crowd, like the Rumpus Room, Meraki’s menu offers a chaotic mixing of tastes and cultures that goes above and beyond typical fusion cooking.

The outside of the restaurant is simple, with wood and glass nicely balanced, though don’t-blink-or-you’ll-miss-it. But the restaurant’s logo can be perplexing, turning the “e” in Meraki into something out of the Greek alphabet, I’d guess. It’s confusing at first glance.

The interior, however, is a stark contrast from the exterior of the place with elegant appointments of faux-leather seating, gorgeous wood dining surfaces, creative light treatments glistening with crystal and even unique artwork by the house manager decorating the walls. My friend and I got lucky and were able to sit at the chef’s kitchen-side, diner-style counter where we were able to watch the cooks do their thing in the open-concept kitchen while enjoying our meals. One thing’s for sure, they’re an open book at Meraki and aren’t hiding anything in the back of the house (the kitchen is still clean as a whistle after being in business for three months)!

The menu was presented as two sheets of parchment-like paper strapped to a teak or bamboo clipboard with hemp-like twine. The top sheet outlined the beer, cocktail, wine and snack selections.  Our waiter noted that the menu is not static; it’s changed every other day or so and depends on whatever fresh, local ingredients are available that meet the chef’s standards. This night, the snacks offered were boquerones (that’s Spanish for “anchovies”) for $4, pickled eggs for $1, edamame hummus for $4, chive-cheese puffs for $4, “man-eating” kimchi for $3, duck crackers for $3, cake croutons for $3, simple bread and butter for $2 and cheese nips for $4. Already, we’re starting to see where this menu is going – all over the board!

My companion and I opted to start things off by sharing an order of the chive-cheese balls for $4 and Meraki’s creative take on salade Niçoise, which appeared on the second sheet of the menu under “Small Shares” for $10. The cheese balls were crispy golden on the outside and filled with tangy, gooey cheese on the inside. They reminded me of cheesy hushpuppies. I love cheese and I love hushpuppies. Enough said.

The salade Niçoise would stun a classically trained, French chef. The recipe I have included with this review below is your standard, French recipe for salade Niçoise, except I use nicely grilled, fresh tuna instead of the classic tuna in oil out of a tin. Meraki’s salade Niçoise, by contrast, uses raw, sushi-grade tuna is dressed in a lemon vinaigrette and sprinkled with a dusting of cured egg yolk and surrounded by tiny, little pickled brussels sprouts, miniature asparagus tips, small dices of fried, purple potatoes, roasted beets and mustard croutons. Missing from their version were black olives and green beans and instead we found the beets, brussels sprouts and asparagus tips. But this salad was so adventurously savory that we happily forgave them!

The other “Small Shares” offered that evening were squash broth, peaches, cippolini and vermicelli soup for $8, hot bread with kale-walnut pesto, cranberries and Italian pecorino cheese for $10, seasonal pickled vegetables in a variety of brines for $7, a poached egg that came with polenta, arugula, Spanish manchego cheese, duck glaze and banyuls vinegar for $10, onion compote with gran queso, pecorino cheese, manchego and crostini for $8, and roasted cauliflower which came with bread crumble, herbs and pecorino for $8. One other choice was pork belly short ribs with pickled trumpet mushrooms, Chinese mustard, soy-mirin broth (mirin is Japanese rice cooking wine – soy sauce and mirin are to the Japanese what salt and pepper are to the West) and house-made steam buns for $11.

I tried the salumi selections plate from the “Cheese & Charcuterie” section for $6 before we got on with our entrees. This consisted of a few selections of very thinly sliced samples of various Italian-style salamis made at Fino in Fondo, a shop in Oregon’s Williamette Valley, accompanied by slices of German-style mustard bread dressed with toasted pumpkin seeds made in-house, along with slices of spicy-pickled celery, also made in house, with a dollop of their cranberry whole-grain mustard on the side. Though the salami samples were nothing out of the ordinary (actually, quite bland), we were both very impressed with the bread and pickled celery.

The other “Cheese & Charcuterie” selections were “Tallgrass” from Landmark, Wisconsin accompanied by lillet jelly (lillet is a French aperitif wine from a small village south of Bordeaux) and lavender pepita (that’s Spanish for “pumpkin seed”) brittle for $6, Glacier Penta Crème from Carr Valley, Wisconsin with house-made mustard and cornichon (French for “little pickle”) for $6, Port Salue, also from Carr Valley, Wisconsin with peach compote and candied walnuts $6 and duck rillette (similar to paté) with scallion crackers and pickled ginger for $8.

From the “Large Shares” portion of the menu, my friend chose the enormous prawns served with Japanese black rice, mirin-dressed bok choy, herb salad and candied macadamias in a delicious honey-milk sauce for $24. I opted for the elk spedini that came with braised celery and Tuscan-style white beans in a salty caper dressing for $15. “Spedini” are Italian-style, flat meat scallops rolled around some form or another of cheese and/or vegetable filling. The only other place I’ve seen elk on the menu in Milwaukee is Sanford, so I of course had to see about Meraki’s elk (elk closely resembles beef in taste and texture). While the elk was perfectly cooked and tender, the filling was quite bland and unsatisfying, clearly not seasoned well enough. The Tuscan-style beans, on the other hand, were too salty. What a disappointment.

But, come the prawns. I think it’s safe to say that we were both blown away by the majestic tastiness of my friend’s dinner plate (she graciously let me eat half of it)! The artful fusion of Asian tastes and textures of that dish were Michelin-star quality through and through. Need I say more?

Other “Large Shares” items to be had were citrus-roasted squash with huckleberry gastrique (caramelized sugar, deglazed with vinegar) and pistachio for $12, abalone mushroom with brown-butter gnocchi, tomato confit and roasted eggplant for $21, a flat-iron steak accompanied by beet bordelaise, baby greens, charred spring onions and onion soubise (a thick white sauce made from onion puree) for $24, Oaxacan brisket with Oaxacan mole and corn arepas (corn pancakes eaten in Venezuela and Colombia) for $24, pan-seared fluke with the fried purple potatoes, citrus marmalade and caper aioli for $19, pork shoulder with sweet potato puree and mixed greens for $18 and duck breast with green lentils, tahini financier cake and tzatziki (Greek sauce made from yogurt, garlic, and cucumbers) for $26.

Desserts at Meraki’s are listed under “Sweet Indulgences.” Included on this day were cookies and milk, consisting of condensed milk sauce, fried cookie dough, dark chocolate and cookie crumble with milk ice cream for $6, brown-sugar bacon trifle with bacon caramel, brown sugar cake, bacon whipped cream, whiskey bacon ice cream and brown-sugar crumble (oh, my God!) for $6 and a variety of chocolate truffles, including saffron, Aleppo pepper, and almond chocolate for $7. Had I not been so stuffed, I certainly would have gone for all the bacon in the bacon trifle!

My glass of Valley of the Moon Cabernet wine cost $14. Our extremely attentive and friendly waiter suggested it, and it was a good pair for what I ordered, though a little on the pricy side.

Meraki has an interesting cocktail menu featuring a few of their own concoctions, such as the “Meraki #1” which is Hotchstadter’s Slow & Low, sour cherry, cinnamon-clove-cardamom syrup and lemon for $8. Also for $8 is “Unleash the Kraken” – Kraken Spiced Rum, pomegranate juice, lemon, simple syrup and soda. Too bad I was driving or I would have ordered one of those. 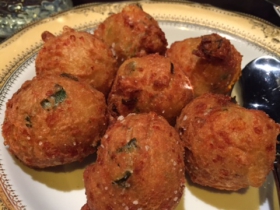 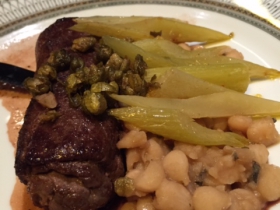 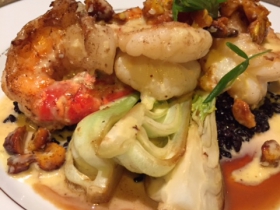 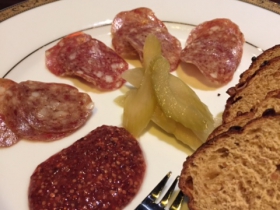 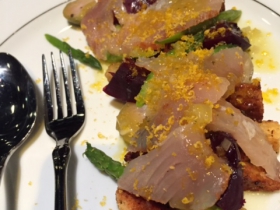 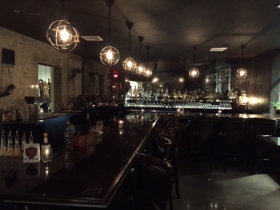 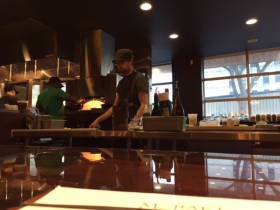 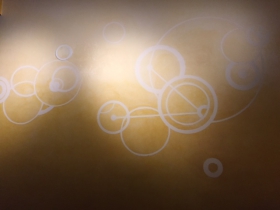 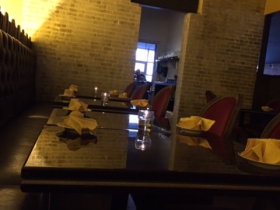 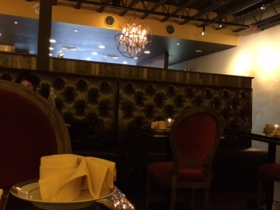 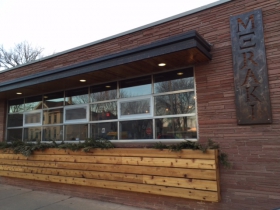 This dish is traditionally made with canned tuna in oil. But why not make it with lovely, grilled fresh tuna instead?

Cover a wide plate with the salad greens. Top the greens artfully, in separate little piles over the plate, with tuna slices, egg, beans, tomatoes, etc. Whisk together the vinaigrette ingredients, then drizzle the salad with the dressing and a little coarse-ground salt and black pepper to taste just before serving.

0 thoughts on “Dining: Meraki, the Wildest Menu in Town?”