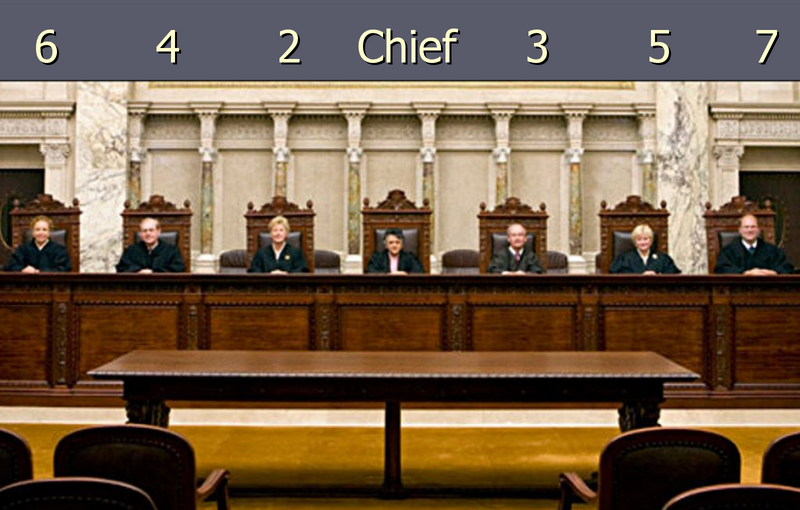 Supreme Court by the numbers.

I never expected to encounter a person who has a constitutional amendment aimed straight at her, but I ran across Chief Justice Shirley Abrahamson at a political affair in Milwaukee this past Monday night. There is a referendum on the April 7th ballot to amend the state constitution to have justices select their leader rather than passing the gavel to the one with most seniority, as has been the case for 126 years.

If the amendment passes,  the conservative majority of justices now on the court would most certainly vote to oust their liberal chief, who, under the current system is guaranteed to be Chief Judge until the expiration of her term in 2019.

So, I asked her how will she vote on the plan that would almost certainly strip her of the title she has worn for 19 years.

She rendered her opinion instantly: “No!”

It turns out this was not the only slap at her by Republicans. “They cut my salary, too,” Abrahamson noted. The budget submitted by Gov. Scott Walker calls for the pay of the Chief Justice to be reduced from $155,000 to $147,000 a year, the court’s funding to be decreased 5 percent, and other provisions.

Under the current system, the seven justices are elected for 10-year terms, and the one with the most seniority is the Chief Justice. The amendment asks voters to change that to have the chief justice chosen by a vote of the court, to serve a term of two years.

The amendment was first introduced in the legislature in 2011. It failed.

It passed both houses of the Republican-dominated legislature in 2013 on a strictly partisan vote, putting it on the path to the two successive votes by the legislature required before it could be put on the ballot. The amendment was one of the first orders of business this session. It was passed on January 20th and January 27th, again on a partisan vote. And now it goes before the voters.

Supporters call the measure a “common-sense reform to increase the court’s accountability and collegiality.” C.J. Szafir of the conservative Institute for Law and Liberty goes so far as to say that characteristics like “equanimity and bonhomie” are “far more important qualifications than seniority” in determining the best choice for Chief Justice. Szafir also mentions “the administrative and scheduling powers of the Chief Justice.”

A Powerpoint presentation by attorney Hannah Dugan prepared in January for the non-partisan League of Women Voters and an address March 21st to the league by former Supreme Court Justice Janine Geske takes issue with supporters of the amendment.

To Dugan, the amendment has a “partisan, political motivation” and is “an ad hominem attack on the current chief.” The legislature is “micromanaging the court,” she asserts. She also disputes the claim that the current system of justice selection is outdated, as there is “no consistency among other states” in chief justice selection that would show a “current” or “contemporary” process in the selection. And the amendment’s change that reduces to two years the term for a Chief Justice is too short for her (or him) to get a handle on the job. A four year term, such as is used in 7 other states would be more like it, she says.

“The scheduling powers of the Chief Justice” cited by Szafir are imaginary: cases are assigned to judges by number. Each justice gets one-seventh of the caseload.

Nor were there any studies undertaken that show a fatal flaw in the system, or a pressing need to change the status quo. “None whatsoever,” said Abrahamson in Milwaukee on Monday. Instead, she has been reported as saying, “it ignores and overturns the vote of the people. The people elected the members of the judiciary for a fixed term and a set office.”

Nor is there any evidence whatsoever that Abrahamson is incapable of performing her duties by any account due to age or infirmities.

The Geske powerpoint included an earlier version of the amendment that would change the selection process but retain Abrahamson as Chief Justice until the 2019 expiration of her term. [Slide 11] It was rejected by the legislature, buttressing the argument that Abrahamson is personally under attack by the amendment, despite what supporters claim.

Geske quoted Justice Jon P. Wilcox as saying of the proposed new arrangement, “If everybody behaves, maybe some day they get to be Chief Justice” — of a court that would now be overflowing with equanimity and bonhomie, if we are to believe Mr. Szafir.

There have been previous constitutional amendments dealing with the Supreme Court, including the 1889 amendment giving the Chief Justice seat to the member with the longest continuous service on the bench. A “massive overhaul” of the state court system in 1977 was approved after lengthy study and debate. It created, for the first time, a State Appeals Court, and transferred jurisdiction over all state courts to the Supreme Court. But the study found no need for changing the terms of the justices, their number, or the mechanism for selecting them, nor were those issues included in the referendum question.

In 2003, the most recent year in which there was a proposed amendment and a Supreme Court contest in the non-partisan spring election, voters approved an amendment guaranteeing Wisconsinites the right to hunt and fish, and Patience Roggensack was elected to the court. Only 20 per cent of eligible voters made it to the polls for that election.

Early voting is available at all municipal clerk’s offices in the state, and such voting began on Tuesday, March 23rd. Voters in the City of Milwaukee should go to the 5th floor City Hall offices of the Election Commission to cast their ballots. Voters will receive an “I Voted Early” sticker for their efforts.

The Chief Justice was in Milwaukee to re-enact the January swearing in at the State Capitol of Rep. Jonathan Brostoff, a Democrat who invited Abrahamson to the event at Casablanca.

She drove herself from Madison, where there had been 4 inches of snow that morning, she said. “When Jon asked me to do the honorary swearing-in at Casablanca, I said, ‘yes,’ because I always wanted to go to Morocco,” Abrahamson joked, and then it was down to business.

Abrahamson read the oath of office while Brostoff held his hand over a State of Wisconsin Blue Book, which was brought to the event by Sen. Chris Larson, Brostoff’s former boss. “This is Wisconsin’s Bible,” Larson quipped.

Larson said he had to convince his nonagenarian grandmother to vote in the election. “You have to vote ‘no’ on the amendment,” he urged her. Grandma will go to the polls, he said.

Brostoff also urged the “no” vote on the amendment to the attendees, as well as a vote for Ann Walsh Bradley to retain her seat on the bench. Wearing his partisan hat, Brostoff said that while Republicans are using fear, the Democrats must inspire voters. “There is a lot of repressive policies being forced on us,” he said. “Let’s not be the tired party,” he said, “let’s be the inspired party.”

At the conclusion of the event, an Assembly proclamation was presented to Patti Keating Kahn for her work in the community. Keating Kahn, the Urban Milwaukee landlord and Brostoff campaign treasurer, was at the event with her husband, retired Judge Chuck Kahn, who documented the event on his camera. 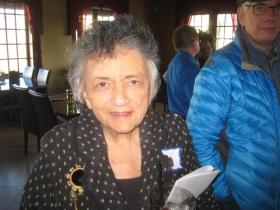 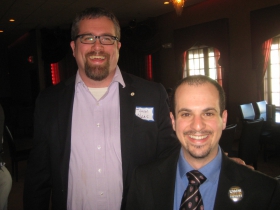 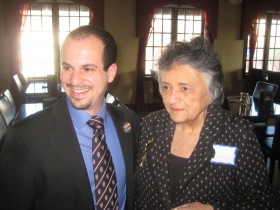 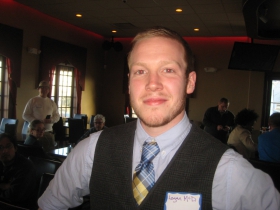 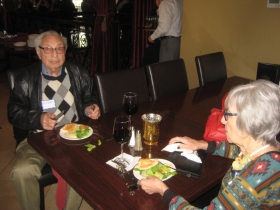 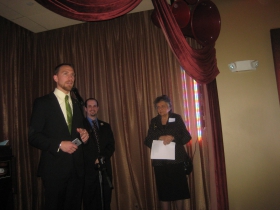 5 thoughts on “Plenty of Horne: Are Abrahamson’s Days as Chief Justice Numbered?”