The new Sage on Prospect, a 34-apartment complex, will have every imaginable green feature. 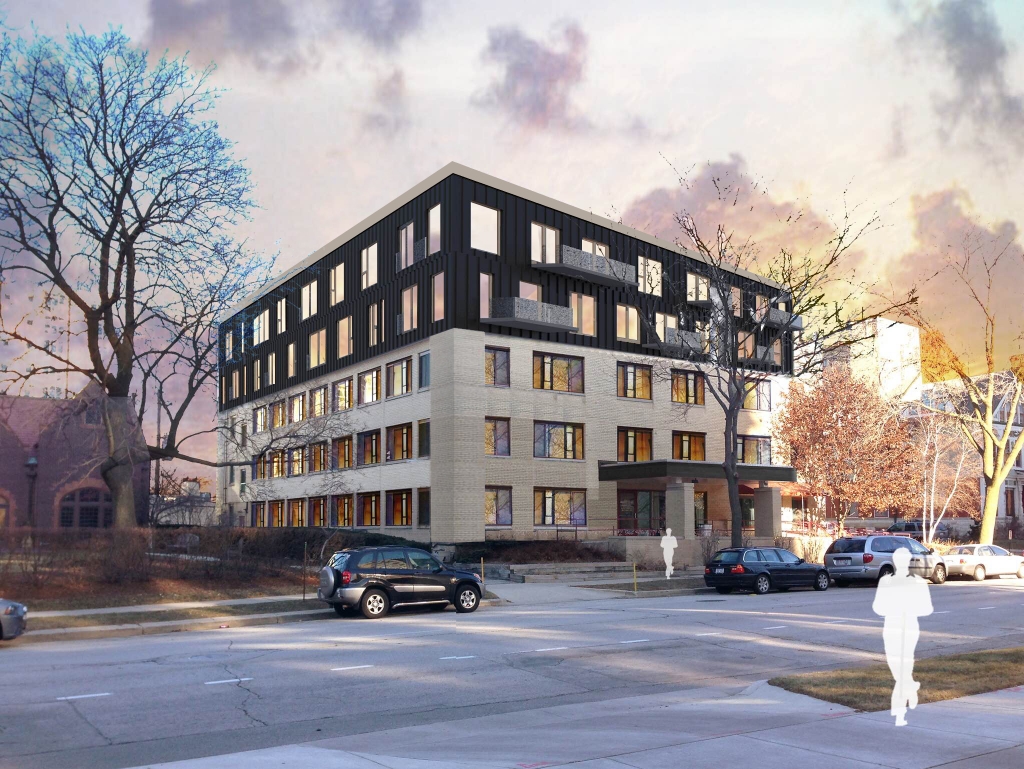 Last year, in order to achieve the first-ever LEED Platinum certification for a multi-family building in Wisconsin, Dominion Properties’ Sage on Jackson would have to amass 82 points on the international scale of eco-friendly, sustainable building construction practices.

The Leadership in Energy and Environmental Design awards points for such things as sustainable sites, water efficiency, sustainable materials, location and indoor environment.

When the results of the exhaustive $40,000 survey of the 21-unit building at 1509 N. Jackson St. came in, the project scored not 82, but 102 points on the scale. The building benefited from its re-use of a vacant lot, its low indoor emissions, its geothermal heat, green roof and solar array among other factors, including the use of repurposed gymnasium floors in the units. The project’s walkability [Walkscore 91] was also a factor in the off-the-charts rating. But then, its developers had promised it might be the greenest building ever built.

It might have been the first multifamily development in Wisconsin to achieve the Platinum certification, but it won’t be the last, says Mike O’Connor, a Dominion Properties partner. Work has already begun on his next quest for the Platinum in the conversion of a former 77-room assisted living center at 1825 N. Prospect Ave. into 34 apartments. It, too, will have geothermal heat and employ green construction practices, O’Connor said.

He made his remarks to an audience of about 30 residents of St. John’s on the Lake, 1840 N. Prospect Ave., immediately across the street from his new development, which itself is right next door to the historic Charles Allis Museum.

O’Connor is a missionary for green construction practices, and he approaches the subject with the religious fervor of a true believer and the confidence of a pioneer staking out a new claim in unknown territory. “LEED Platinum is not easy to come by, but Sage on Jackson not only achieved it, but substantially exceeded it.”

The new project will be called “Sage on Prospect,” he said. “I’m building a brand. Sage is a green system of living. Sage is a plant, which is green. Sage also means ‘wise,'” O’Connor added. “It’s our own niche. We are the only company making sustainable buildings in Milwaukee.”

Like Sage on Jackson, Sage on Prospect will have 8″ thick walls instead of the standard 2″x4″s. Thicker walls are better-insulated walls, he said, and the added expense — just in the thousands of dollars — is justified by the superior quality of the construction, O’Connor said. He will use natural mineral wool insulation instead of Fiberglas. “It’s cleaner, uses less energy to produce and is four times denser than Fiberglas,” he enthused. The building will have upcycled wood floors (O’Connor is no fan of wall-to-wall carpeting), it will be chemically neutral — “no formaldehyde! Zero Volatile Organic Compounds!” he said.

Copper piping, not Polyvinyl Chloride, will deliver the water to the apartments. Copper has been used for centuries, and O’Connor doesn’t want to worry about chemical problems in the future, he said. Like Sage on Jackson, Sage on Prospect will include electric car charging stations. That means O’Connor will be able to charge up his Tesla when he comes around to pick up his rent checks.

There will be 24 geothermal wells sunk 320 feet into the earth in the surface parking lot to the north of the building. O’Connor’s engineers haven’t figured out how much load the new roof can carry. “There might be a load issue for a green roof. Maybe a blue roof to gather water and stage its release so it doesn’t overwhelm the sewer system.”

Work has already begun on the transformation of the 1961 building. “We’ve removed the lead and asbestos already, and are doing interior demolition now. We’ll be peeling off the top floor over the next two weeks to 30 days, and should have the place finished by Spring, 2016,” he said.

The existing top, or fourth floor, is only partial, and is a mere 7’2″ tall, while the floors below are 8’6″, he said. Two new floors, each with 9’6″ ceilings will then be constructed. The exterior of the current building has some hokey features that will be removed and reconstructed, he said, like fake fieldstone quoins that will be ripped off and replaced with fly ash brick made in Caledonia from the Oak Creek Power Plant. Seventeen parking spots will occupy the basement of the building, to be accessed via the alley.

One bedroom apartments will rent for $1,300 – $1,400, while two bedroom units will go for about $1,800, O’Connor said. However, that price includes electricity, heat, internet, cable, water — the works. You just write one check a month, O’Connor said.

All of the energy-saving, LEED-certifiable features cost money — upfront money, at that. In the frenetic world of hyperextended real estate financing and development, Sage is an outlier.

But O’Connor says he is in it for the long haul. The Milwaukee native, who was born at St. Mary’s and grew up on the East Side, said he was a Political Science major in college who has a tendency to take the long view. [His partner, Christopher Adams, an engineer, tends to the minute-by-minute details, O’Connor said, adding, “I’m Venus — he’s Mars.”]

At Sage on Jackson, the geothermal wells, the LED lighting, the mineral wool-insulated 8″ walls and the rooftop solar panels are already paying for themselves, he said. “The Sage on Jackson electric bill last month was $700,” he said. “Plus we received a $400 credit from WE Energies for the solar panels. So the net bill was $300.”

Please note the sum is the energy bill for the entire 21 unit building, including heat, hot water and lights. Only one unit remains for lease in the project.

O’Connor says his projects also add extra up-front expense to include such details as removable access panels to plumbing fixtures. Usually, these areas would be covered with drywall, and it would be the landlord’s problem in the future to tear it off to get to the problem. After all, Connor says, he expects his children to run the business some day: “I don’t cover up the plumbing for the next person to deal with it. I am the next person.”

His view, in short, is very long-term: “I expect to hold these properties for generations.”

A Note on the Current Rental Apartment Market

O’Connor, in his remarks, was asked about his target demographic.

He said the largest is the millennials aged 25-35 who have been flocking to urban areas in recent years.

His favorite demographic, O’Connor said, are the empty nesters who say to themselves, “why am I shoveling this walk and mowing this huge lawn? I can move Downtown where the cool kids are.”

The third target demographic is a subset of the second, he said — the Empty Nester who gets divorced. “It’s a fact of life,” O’Connor said. Very often one spouse will remain in the family home, while the other moves to an apartment downtown, he said. Or maybe they both are lucky enough to escape the suburbs to start life anew in the city.

“Seventy-five percent of my tenants don’t care about the green aspects,” O’Connor said. But ongoing education of tenants is part of the LEED process, he said. Sage properties use high efficiency washing machines, which require energy efficiency detergents, “or, you’ll get a mess,” he said.

“We actually give each tenant some detergent to start them out.” 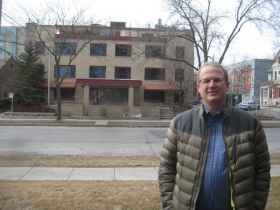 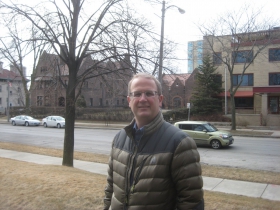 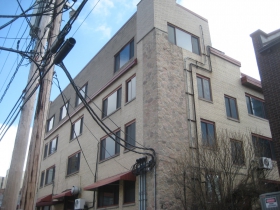 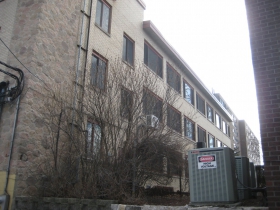 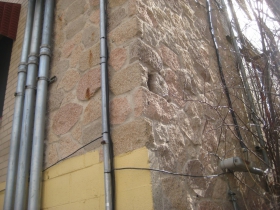 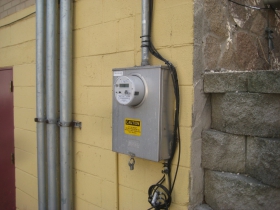 6 thoughts on “Plenty of Horne: Second Sage Building Will Be Super Green”