Then located on fourth street near Wisconsin Ave., the crusading newspaper had no shortage of delivery vehicles. 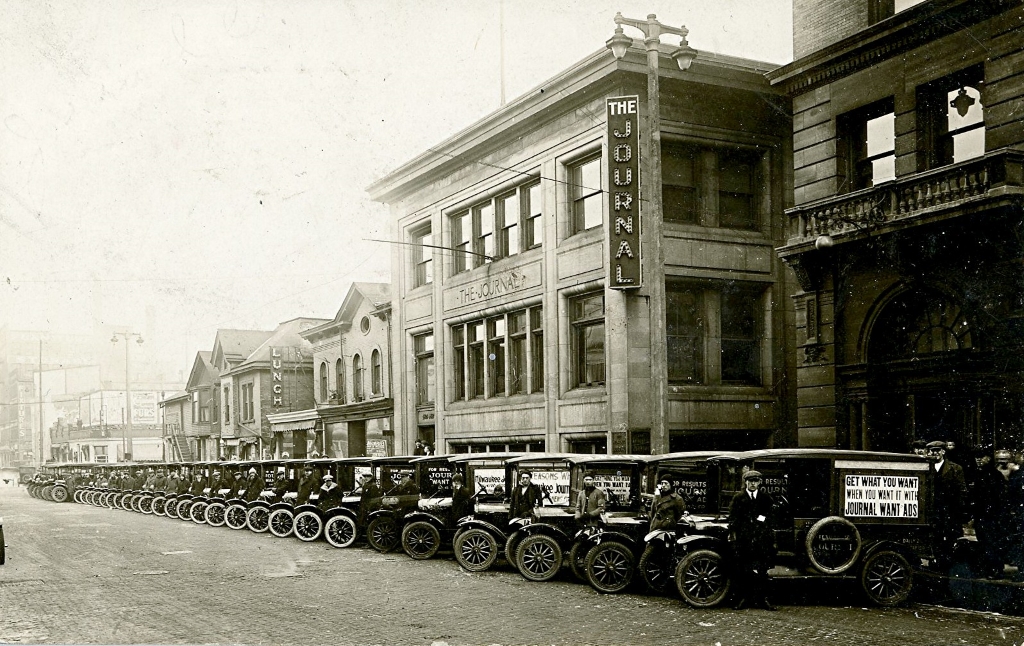 When the Milwaukee Journal began business in 1882 there was quite a lot of competition in the newspaper business. There were at least ten competitors in Milwaukee, but only four were printed in English! Four German language-newpapers and two Polish language-papers were also published.

Of course the major competitor for the Journal was the Milwaukee Sentinel, founded in 1837 by Solomon Juneau, nearly a decade before the City of Milwaukee was incorporated in 1846. The Journal soon won a reputation as a crusading newspaper after its coverage of the 1883 fire that burned down the Newhall House, the city’s foremost hotel. The paper’s investigation showed the fire was due to negligence and that city officials ignored obvious signs of danger in a building that had long been known as a firetrap.

The paper steadily grew until April 1907, when the company opened a newer, grander headquarters on the east side of 4th St., between Wisconsin and Wells. This is a photographic postcard of the building taken about a decade or so later. It shows a very modern structure complete with an electric sign. Delivery vehicles are all lined up with signs promoting the paper. A printed history of the paper has a similar view that dates from 1919, but the delivery vehicles are completely different.

None of the buildings pictured above still stand.

One thought on “Yesterday’s Milwaukee: Milwaukee Journal, About 1917”