Second season of bike-sharing program aims for simpler pricing and four times as many bikes and stations.

Bublr Bikes hit the streets of Milwaukee in 2014.

In 2014 Milwaukee joined a long list of American cities offering bike-sharing as a form of urban transportation to residents and visitors alike. Bike-sharing systems allow users to affordably rent bicycles located at various stations around a city for short trips. On Monday, Bublr Bikes will kickoff the second season of bike-sharing in Milwaukee, and with it will comes changes. Kevin Hardman, executive director of the non-profit organization, says it will strive to be “an accessible, affordable form of transit.”

Last year Bublr rolled out 10 stations with 50 total bikes, primarily located near Downtown. This year Bublr’s goal is to expand to 40 stations with 200 total bikes and reach into neighborhoods. To accomplish this, Hardman cautions, “is still going to take a lot of heavy lifting.” Nine of the current stations will open on Monday, the exception being the Cathedral Square station, which is delayed to allow for potential snow removal operations. The first of the new stations is being installed at E. Brady St. and N. Humboldt Ave., next to Saint Hedwig’s Catholic Church, with an opening date still to be announced. New stations will be added throughout the summer.

To facilitate this expansion the city will hold public meetings to gather input and provide information on the system’s progress. As of today, Bublr hasn’t revealed additional station locations, but Hardman stresses that “for Bublr to be a long-term success it has to be close to where people live… we’re going to build a bike-share system for all of Milwaukee.”

In addition to planning the added bikes and stations, Bublr used the winter off to rework the pricing model. Hardman says Bublr needs to insure a “low cost of entry” and “align the bike-sharing pricing with a model that’s becoming a standard to not only transit, but gyms and Netflix.” In 2014, the walk-up pricing model of a $7 pass with unlimited 30 minute checkouts plus overage fees led to confusion for users, many of whom interpreted it as $7 a day. This confusion prompted Bublr to refund “a lot” of revenue, Hardman confesses, and led to a new plan that is “simple, simple, simple.”

The new model has two pricing programs. For the walk-up user it’s just “3 bucks a half hour,” says Hardman. The other option is a $15 monthly recurring pass with unlimited 60 minute rides targeted at residents and regular users. 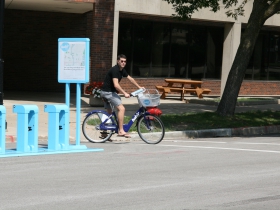 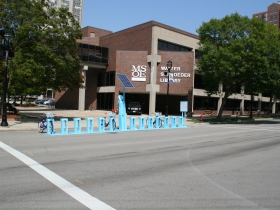 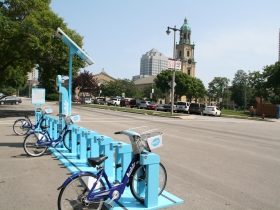 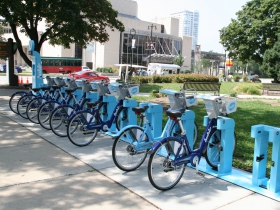 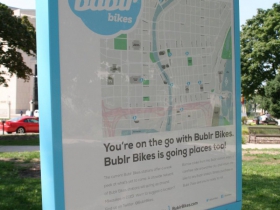 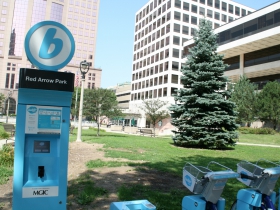 One thought on “Eyes on Milwaukee: Bublr Bikes Returns”