Will Right-to-Work Cause Sickness and Death?

Logic of the law’s supporters suggest this -- and other terrible things -- will happen.

For those setting out to use statistics to prove a point, one favorite technique is to ignore the distinction between correlation and causality. In this technique, if a state adopts policy A and outcome B happens, policy A must have caused outcome B, which proves that policy A was wise—or foolish depending on the outlook of the author.

This technique is well-illustrated in a report issued by the conservative Wisconsin Policy Research Institute under the title The Economic Impact of a Right-to-Work Law on the Wisconsin Economy. The report’s authors set out to show that RTW laws promote the growth of incomes over time. Using a regression model the authors conclude that “the presence of a RTW law added about six or seven percentage points to the rate of per capita income growth in the period from 1983 to 2013.” They then go on to suggest “that, had Wisconsin adopted a RTW law in 1983, per capita income would have been $1,683 higher in 2013 than it actually was.” Such research helped provide the rationale for supporters of a RTW law in Wisconsin, which the legislature, just passed. 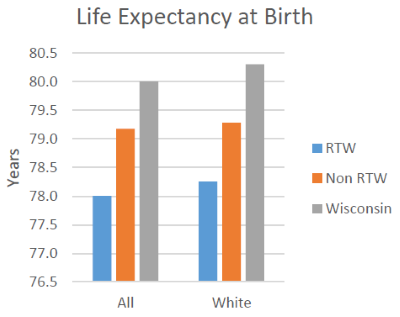 Accepting the WPRI report’s assumption that correlation suggests causality can be liberating, if dishonest. Applying statistical analysis to states with and without RTW laws results in the following “suggestions” (using the authors’ terminology) about Wisconsin’s future as it joins the ranks of right-to-work states:

1. Wisconsinites will die earlier. As the chart to the right shows, residents of right-to-work states live on average about a year less than residents of states without those laws. For Wisconsin residents the difference is two years. Thus, applying the authors’ logic, passage of RTW should lop one to two years off the average Wisconsinite’s lifespan.

To check out whether the difference is attributable to more minority group members in RTW states, the same analysis was applied to the white population of the states. White people also die earlier in RTW states. 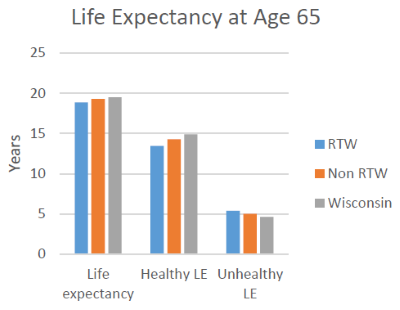 2. Those Wisconsinites who do make it to age 65 will be sicker and die sooner. The statistics also show a relationship between RTW laws and shorter life expectancies for people who manage to survive to age 65. Here the difference is measured in months rather than years, as shown in the plot to the right. The three columns to the left compare the life expectancies for 65 year-olds in RTW states, in non RTW states, and in Wisconsin.

The middle columns compare the projected healthy years for those reaching age 65.

Even though people in the RTW states live a shorter time after turning 65, they spend more time being unhealthy, according to US government statistics. 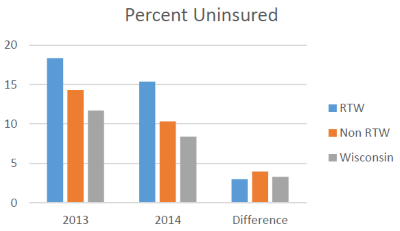 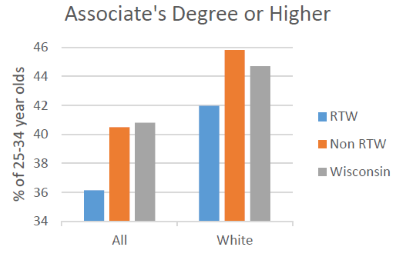 4. Wisconsinites will be less educated. The next plot shows the percentage of 25 -to 34-year-olds with an associate’s degree or higher. The first three columns show the averages for all residents in RTW states, non-RTW states, and Wisconsin. To eliminate differences based on varying demographics, the second series of columns show the result for white residents.

5. Wisconsin will find it more difficult to move into the “New Economy.” The Information Technology and Innovation Foundation or ITIF Innovation Score rates states’ “New Economy” success factors, their potential to achieve an “economic evolution.” In this case, Wisconsin is already at the average level for RTW states and has fallen well behind the average non RTW state. 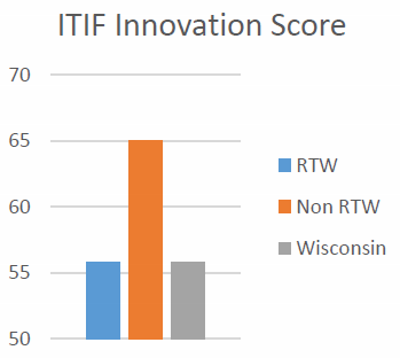 Do these differences, which are statistically significant, result from the presence or absence of a RTW law? By the standards of proof applied in the WPRI report, the answer would have to be yes. But proving causality is a more complex challenge than simply identifying a relationship.

The traditional approach to showing causality is through random sampling. In this case half the states would be randomly chosen for RTW legislation and the results would be observed. It would be assumed that any differences would be due to the presence or absence of a RTW law. Clearly such an experiment is not politically feasible.

Where random experiments are not possible, an approach sometimes taken is to construct samples that look as if they were randomized. Thus a southern state with an RTW law would be matched with a southern state with similar characteristics except lacking a RTW law. The trouble with this strategy is that no southern state lacks an RTW law. Likewise, one would be hard pressed to find any state with RTW legislation in the North East or the Pacific coast or, until recently, the industrial Midwest.

Correlation does not prove causality. If A and B seem to be related, there are four possible explanations:

It seems most likely that the third explanation is most relevant to the question of the effects of RTW laws. RTW is generally accompanied by a whole range of cultural, political, historical, and other differences with states lacking RTW. A glance at a map of those states with RTW laws shows why its impact is hard to isolate its impact from all these other factors.

As mentioned, the WPRI report uses multiple regression to estimate the personal income growth over 30 years that might be attributable to RTW laws. Since the laws are concentrated geographically it is hard to separate the effects of the laws themselves from other things going on in the states. For instance, the demise of legally-enforced segregation was likely a boon to the South, as was the spread of air conditioning and the move to the Sun Belt. Outside the South, several RTW states experienced an oil boom, centered on the Dakotas and Wyoming.

Even if a researcher were intent on making a good faith effort at separating the effect of RTW from the other factors influencing a state’s economic performance, the task would be a challenging one, particularly because of the many other differences between RTW states and non RTW states. In multiple regression this raises the danger of multicollinearity, where supposedly independent predictors correlate with each other, so it becomes very hard to separate the effect of one from another. There is no indication that the authors of the WPRI report looked for such correlations.

Instead, the authors of this paper clearly partisans in the RTW wars. Richard Vetter, the lead author, is a retired economics professor who describes himself as “to the right of Attila the Hun..” He seems to have created a cottage industry in which he hires his students or former students to write reports supporting RTW around the country, including Indiana and Minnesota. All the reports follow essentially the same plot, blaming the lack of RTW for a state’s low growth in personal income. In the Indiana paper, he also argues “that the absence of a RTW law in the Hoosier state has contributed to a massive brain drain from the state in recent time….If Indiana had a RTW law, it would not be languishing below historically poor southern states in terms of its overall levels of income.” 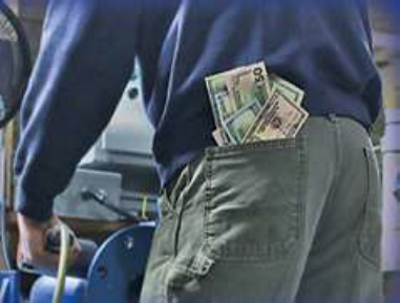 Cover of the WPRI report.

The cover of the WPRI report shows a worker with $50 and $100 bills loosely stuffed in his back pocket while apparently tightening a bolt. The implication is that RTW is good for people with assembly jobs. A problem with this implication is that there is evidence that wages are lower on average in RTW states, whether due to the RTW law or some other factor. A second problem is that per capita income includes things like capital gains which the presumed worker probably does not have a lot of.

The immediate effect of RTW will be on unions who will have to cope with free riders who enjoy the benefits of unionized jobs without paying the costs. It seems likely also to upend the business model of much of Wisconsin construction that depends on unions for a trained work force (and companies in this industry have opposed RTW).

Will passage of RTW in Wisconsin shorten lives, cause sickness and a lack of health insurance, reduce educational levels, or make Wisconsin’s economic transformation less likely? As a direct result of passage, that seems unlikely. What we can say is that RTW is connected in some way to shorter lives, less health insurance, a less educated population, and resistance to economic transformation. To go beyond this and either make statements about cause and effect or predictions represents a form of researcher malpractice. Unfortunately the authors of reports advocating RTW feel no reluctance to make such a leap.

4 thoughts on “Data Wonk: Will Right-to-Work Cause Sickness and Death?”